The creators of Repudo aim to “add another layer to communication; the location”. With their app installed, every user can ‘drop’ various types of files on physical locations. These files, and their geographical position, are then stored by Repudo’s system, waiting for other users to pick them up. Users can collect other people’s files (‘Repudos’, in the app’s terminology) by either looking them up on the map (accessible via both the app and the website) or by simply walking about and checking every now and then on the app interface list if they are near one. To be able to pick them up, users have to be within a certain range of the item. 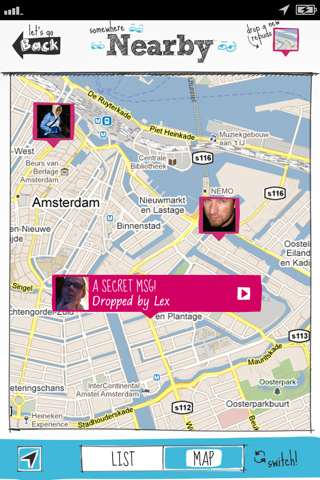 In the playfully designed interface, the user can choose from a number of features. First of all, a new Repudo can be created. Opening the creation menu, the user has the option to select a particular type of file, a location on the map, and the mode of privacy (which is rather simple – the file can be either for one particular co-user or for anybody to pick up). Second, Repudos can be picked up. To be able to do this, users have to go to the specific geographical spot where it is stored. The app then enables them to pick up the item. First, however, the user needs information on the whereabouts of Repudos. This can be found in two ways. Clicking on the ‘Nearby’ button in the main interface menu shows a Google powered map with all the (public) files in the user’s surrounding area, waiting to be picked up. Clicking on the ‘To pick up’ button in the main menu shows the Repudos that were dropped especially for that particular user. Clicking on any of them reveals their location.

The service is a very workable and playful way of adding an extra layer to online communication. Users have to actually go to a specific location to collect an item, which gives the digital item a certain tangible aspect: it feels as if you are going to the post office to collect a package, for instance. The user interface is set up in a very accessible fashion, enabling the user to get to nearly all the information in various manners, without getting confused by too many options. The app lends itself for both personal communication and commercial use (like “Two of the 100 Repudos dropped around town contain golden vouchers exchangeable for fabulous prizes!” – a number of examples such as this one are listed on the app’s website). 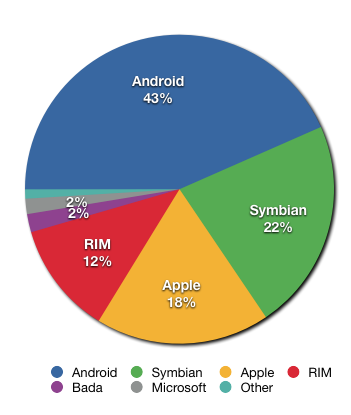 Unfortunately, there are also a number of downsides on Repudo. First of all, the app is only available for iPhone, Android and Blackberry, excluding about 25 per cent of smartphone users worldwide (as shown on the right). Second, the map tends to be inaccurate. Looking at a larger geographical area, for instance, only shows some of the (collections of) Repudos, so the users has to specifically search for them, stripping a layer of the surprise effect, among other consequences. Finally, once dropped, Repudos cannot be altered. The creators write that this ads to the tangible feel of the item, but I feel that argument does not really make sense – a real hidden object could be altered by its hider, too. By the time of writing, it remains unclear if a Repudo, once dropped, will either remain on the spot forever, providing users picking it up with copies, or prove to be unique, disappearing from the map once picked up. This post will be altered when the information becomes available.

The Repudo app is a charming and original attempt to ad a physical layer to communication, adding to the perceived value of the messages. The user interface is clear and easy to use, and the possible ways of using the service are numerable. Still, the inaccuracy of the map, the limited compatibility, and the remaining vagueness surrounding the features of items once they have been dropped do point out some limitations. However, these issues do not seem fundamentally unsolvable. Hopefully the young and growing team will be able to solve them soon.