Google’s Newrosis: How the issue language pre-determines the content of Google search results

Newroz (meaning “new day”) is a traditional Iranian new year holiday celebrated by the Kurdish people (as well as by other cultures) between 18 and 21 March in order to welcome the coming of spring. Traditionally, people celebrate Newroz by gathering together, wearing colorful traditional Kurdish clothes, dancing and lighting bonfires. The decorations are usually in green, yellow and red (colors of the Kurdish flag).
However, since the 1980s, Newroz celebrations in Turkey have become extremely politicized, and the instances of PKK (the Kurdistan Workers’ Party) staging attacks during the days of Newroz -back when it was still illegal to celebrate it- haven’t helped the cause. As a result, Newroz celebrations in Turkey are generally met with violence and oppression, with lots of people celebrating getting attacked and killed by police forces. In 1991 and 1992, at least 125 people were killed as a result of police violence during Newroz celebrations ((http://bianet.org/bianet/bianet/17453-newroz-1991-2002-neler-oldu)).

It is only since 2000, that the Turkish government has removed the ban on celebrating Newroz. Being a Turkish citizen with Kurdish nationality, I know many Kurdish people who live in Turkey. Yet, none of the people I know have ever been to a Newroz celebration in Turkey because of the extreme political undertones of Turkish celebrations of Newroz, the first time I attended one was when we moved to Hungary with my family and the Syrian community organized yearly Newroz celebrations, where politicizing was off-limits and it truly was about celebrating the coming of spring with a Kurdish community and with those, who enjoy the Kurdish culture.

Even though it is not illegal to celebrate Newroz in Turkey anymore, it is still illegal to spell it as Newroz. The Turkish government renamed it Nevruz, since the Turkish alphabet doesn’t have the letter ‘w‘, whilst the Kurdish one does ((http://www.theworld.org/2009/11/illegal-letters-in-turkey/)). The Turkish government also reclaimed it as a Turkish holiday as opposed to a Kurdish one in 1995. The debate on whether Newroz can be thought of as a Turkish celebration is still very heated and this remains a controversial topic.
On Sunday, 18 March 2012, during the Newroz celebrations in Istanbul, Haci Zengin, District Chair of the pro-Kurdish Peace and Democracy Party (BDP) died due to unnecessary force used by Turkish riot police ((http://globalvoicesonline.org/2012/03/18/turkey-police-attack-kurds-celebrating-newroz/)). The event was pre-planned, however BDP wanted to organize the celebration on 18th of March and interior ministry wouldn’t allow Newroz to be celebrated on any other date than its “usual” celebration date of March 21 ((http://www.hurriyetdailynews.com/the-stupidity-of-banning-newroz-.aspx?pageID=238&nID=16465&NewsCatID=411)).

BDP went ahead with its Newroz celebrations on 18th of March and the government responded with sending riot police to the celebrations and barricading the entrances towards the square in Diyarbakir and locking down the whole city to discourage people from leaving Diyarbakir to celebrate Newroz. ((https://twitter.com/#!/YekbunAlp/status/181283701685108736)). The police went on to using water cannon, tear gas and baton charges to break up the demonstrations, which led to the death of the BDP politician ((http://www.reuters.com/article/2012/03/18/us-turkey-kurds-idUSBRE82H07520120318)).

In order to see what was going on across the world during Newroz, I queried Google News for “newroz”, this is how I found out about the death of Haci Zengin. However, when I queried Google News for “nevruz” I was met with a completely different picture, where Haci Zengin’s name or death weren’t even mentioned in the first few results. In fact, the first result of the search was about the 36 wounded police officers. All the results were in English, but it seems that the search term itself, both of which refer to the same celebration, predetermined the context and resulted in different world views, one in which the news about the death of a politician is prioritized, and another where this is deemed so unimportant, that it isn’t even mentioned on the first page of the results. 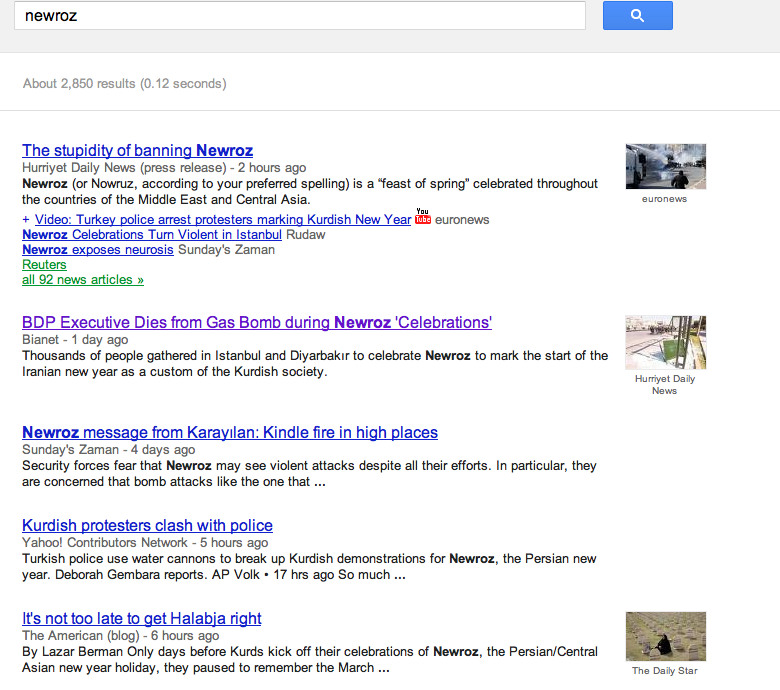 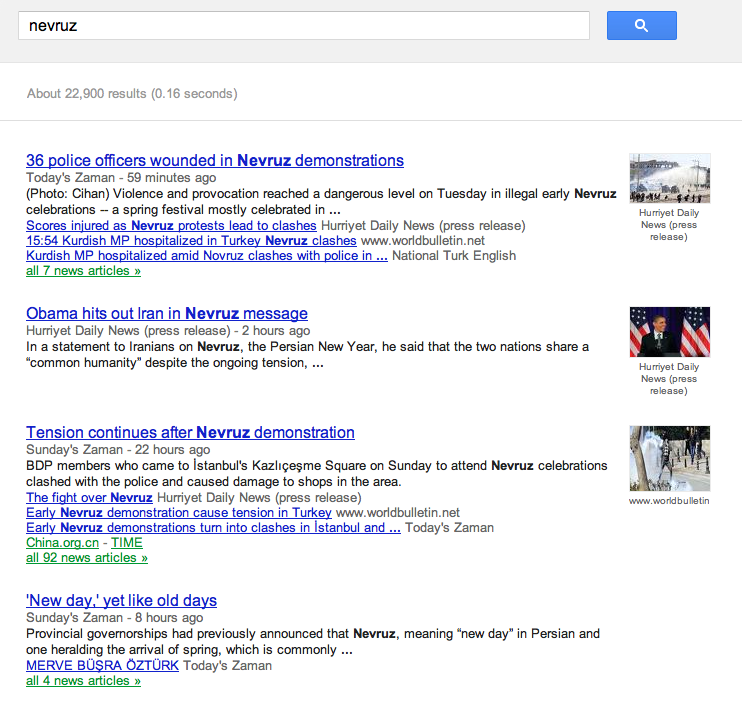 Since there was such a visible contrast between the content of these articles (expressing pro and anti-Kurdish sentiments), I wanted to see whether the different world views associated with these two spellings can be observed in other spheres as well. I searched for these two terms on Google Images and was met with an image of what it means for a government to reclaim a celebration as its own. Wikipedia article on Newroz stresses the importance of fire to the celebration: “On the eve of Newroz, in southern and eastern Kurdistan, bonfires are lit. These fires symbolize the passing of the dark season, winter, and the arrival of spring, the season of light.” ((http://en.wikipedia.org/wiki/Newroz_in_Kurdistan))

The search results on Google Images show fire, the Kurdish flag and the traditional Kurdish costumes for the newroz query, yet for nevruz, we are met with Turkish flags, pictures of Atatürk, Turkish military men, spring flowers, traditional Turkish costumes and basically no hint of the Kurdish culture. It is as if the two terms didn’t even refer to the same celebration. Hopefully, one day Kurdish and Turkish people will both celebrate together under a common name, but today, it seems like they aren’t even celebrating the same event. 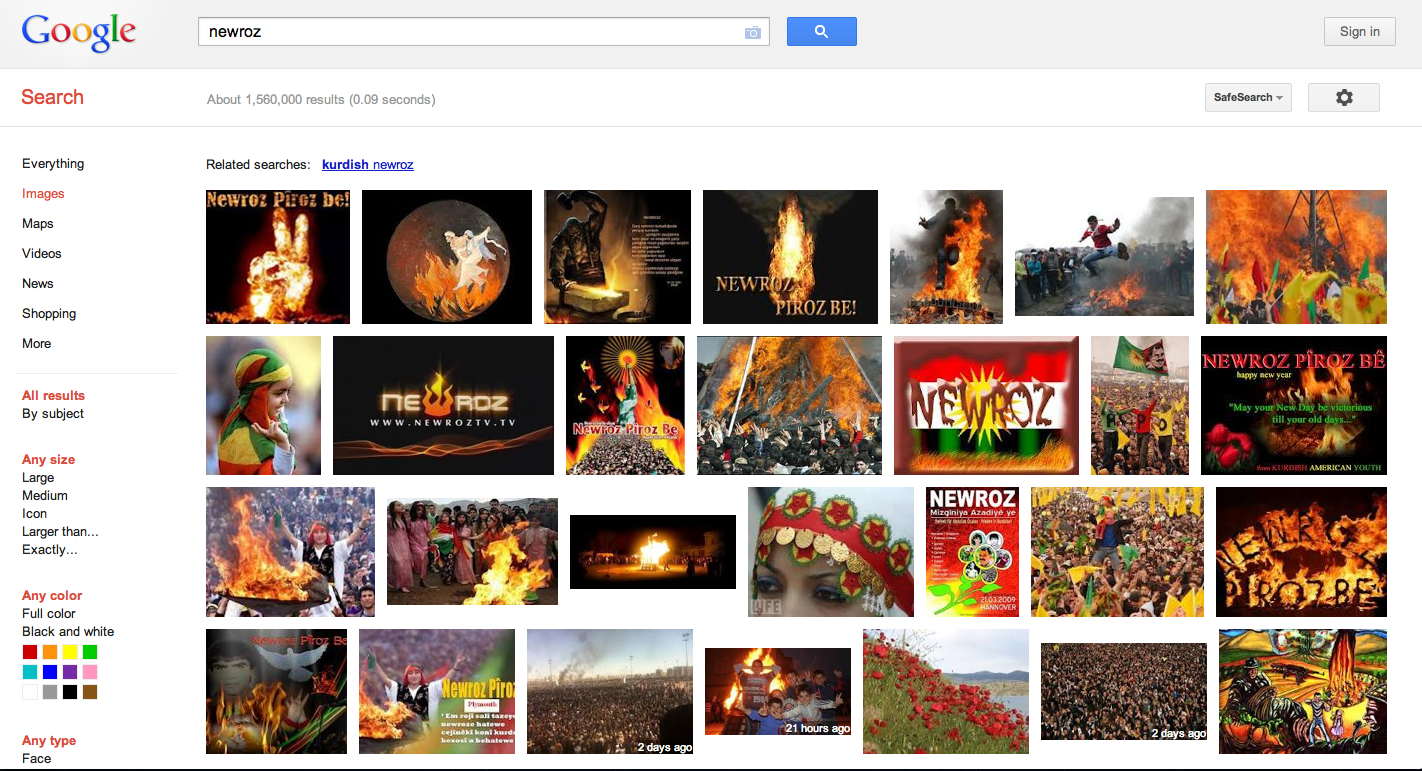 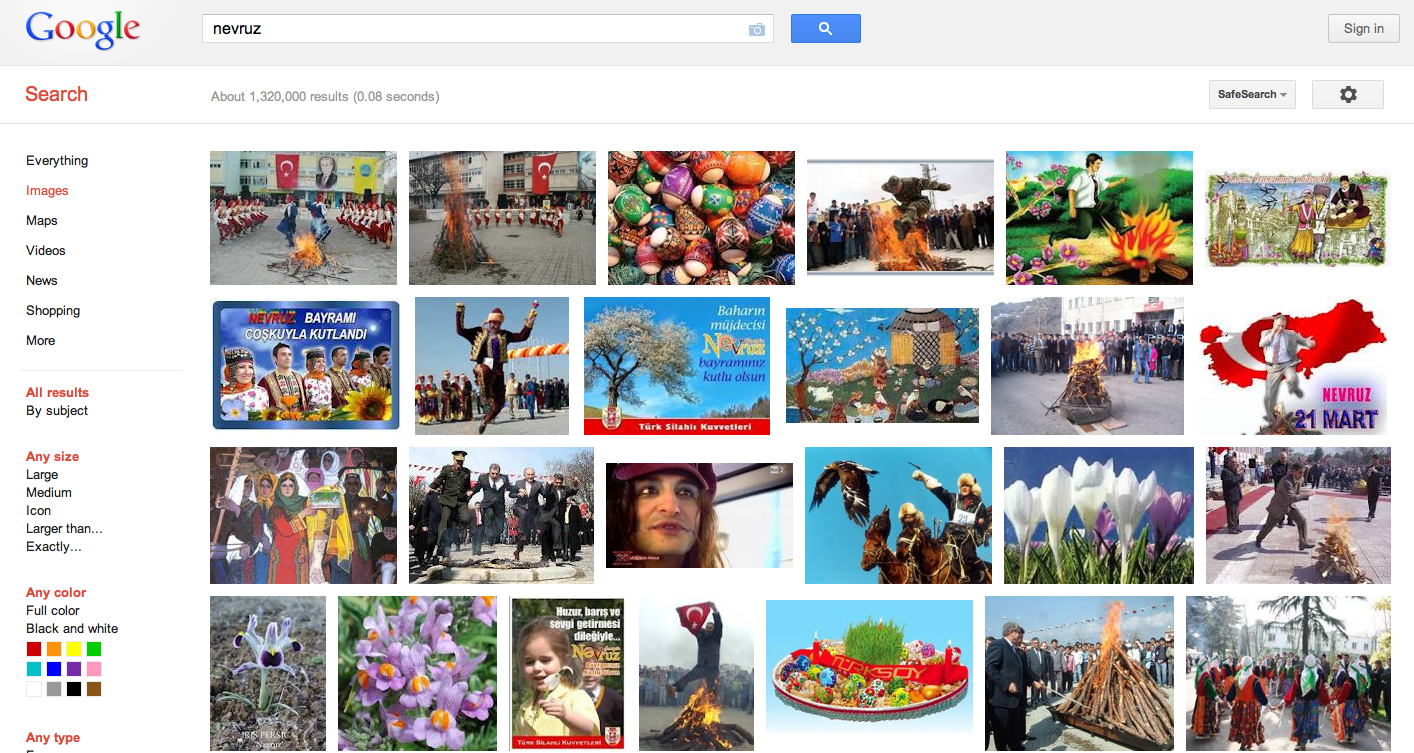