The Professionalization of the Modding Culture

In the digital media landscape new opportunities arise for active users and growing communities. As a active user of media you have the possibilities to use, modify and produce media. According to Henry Jenkins  new media technologies have profoundly altered the relations between media producers and consumers. Media producers are becoming more aware of fan communities and try to better serve the fans by involving them in the production. In the context of computer games, involving gamers in the production of content have become a fundamental property. Modding represents a clear example of the participatory culture and you might say that this user-driven culture is institutionalized and commoditized by the game developers.

The phenomenon modding within the gaming culture

Modifying games, or ‘modding’, is an popular phenomenon within the gaming culture and become increasingly valuable to the game industry. For instance, the successful mod Counter-Strike was bought by Valve and became a standalone retail game.

So, what exactly constitutes the modding culture? In context of computer games, mod is usually used when referring to user-made modification of a pre-existing game. It is an interesting form of user-generated content. Modding can be seen as a fan practice in which gamers modify their favorite games. This can be done by individual users or small communities. The modding culture is being active on web platforms and forums where they come together to discuss and share content. Mods are just as diverse as computer games. They may vary in size and complexity. It can vary from a small addition to a game to a total conversion in which the entire gameplay is adjusted. Total conversion developers have to deal with several aspects of modding. These include modeling, texturing, mapping, sound, programming, et cetera. Therefore many mod developers often organize a multidisciplinary team in which different specializations are included. Because of this, mod developers must increasingly act as a professional organization to be able to get everything done within a reasonable time.

From hobbyist to professional

Modifications of computer games are not a new phenomenon. In a certain sense it exists as long as the advent of the first videogames in the sixties. First, the need to modify videogames is originated from the first generation of hackers. This need can be seen in one of the first videogames: Spacewar. This game was distributed as demo software in 1962 for the PDP-1 minicomputer.
The second significant factor that has contributed to the establishment of the modding culture emerged in the eighties. Home computers came on the market such as the Commodore 64, which was also used for playing video games. This resulted in a subculture which consisted of ‘crackers’. They were computer fanatics who practiced their program skills on computer games, for example, to activate cheats or crack copy protection.
In the nineties the relationship between the game industry and consumers of digital games began to change. Videogames such as Quake and Doom were released with level editors so fans could make their own modifications. The most successful mod in history was born in 1999: Counter-Strike. This fan-made mod was developed by Minh Le and quickly became a phenomenon. Millions of copies were sold of Counter-Strike under the brand name Valve. This ultimate example gave other first-person shooter developers awareness of the importance of the modding culture.

The historical context of modding indicates that the relationship between the gamer and the producer has changed enormously since the nineties. Because the game industry is constantly evolving with new powerful game engines, it has become more complex. Furthermore there are more possibilities and modding nowadays requires more skills. For instance, formerly you had two hours work to create a level for Doom or Counter-Strike, nowadays you need weeks and sometimes years to create an add-on or total conversion. Additionally, the game industry is a market in which a lot of money is involved and which continues to grow.

Borders between producers and consumers are fading and the consumer has the oppertunity to produce content as an active user. Accordingly, both sides can profit from it. Modders receive the oppertunity to add their creative content from the game developers and receive respect from within a community. Meanwile the value is raised and it creates commercial oppertunities for game developers. Also, modders can further professionalise by gaining experience in modifying games.

This process is shown in the Produsage Value Chain of Axel Bruns: 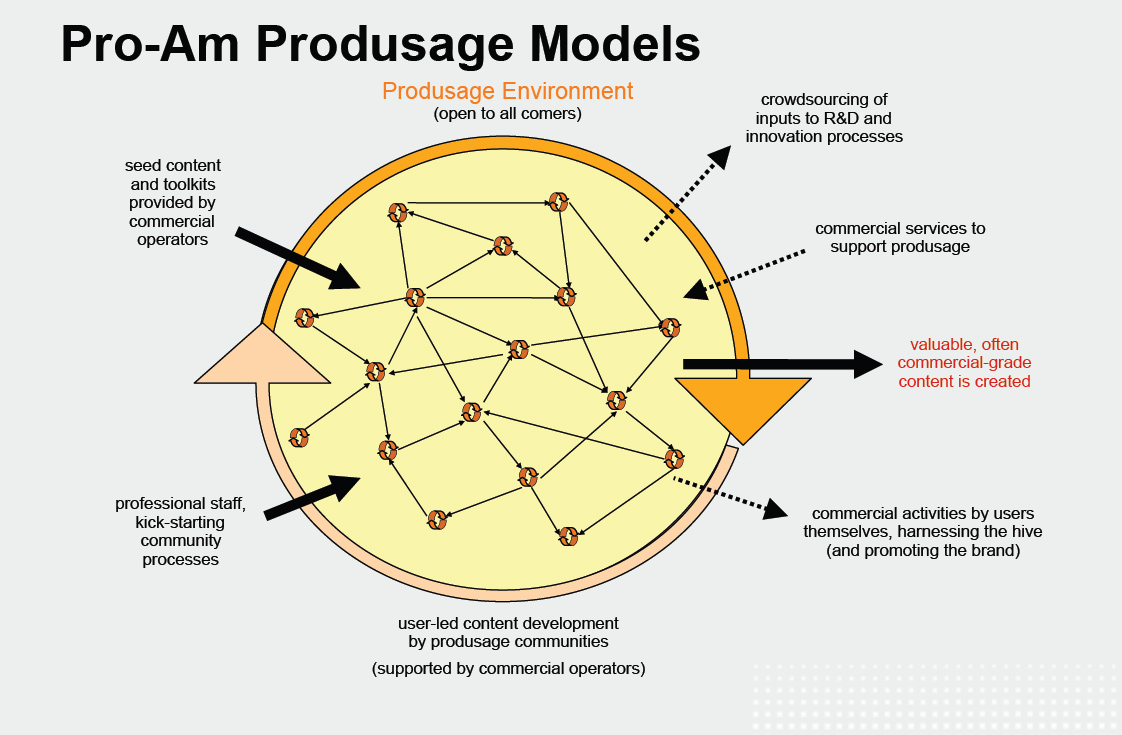 From the produsage model of Axel Bruns I can conclude that produsers as well as game producers can provide a contribution to the professionalization of the modding culture.

From the player perspective, the maturing of game industry has produced new interesting
possibilities. In some cases gaming can shift from being a hobby to a full-time job. Lots of modders expect that through their experience in modding they will find much easier a job in the lucrative gaming industry. Some modders consider it as a great opportunity to get some real experience and something to be able to show as a reference when applying to game designer jobs. Experience and skills are very important for a job as a programmer or designer in the game industry. The profession of a programmer is one of the last highly technical fields that an amateur can enter without any formal training. Modders are not wrong in believing that modding could lead to a good job. There are plenty of digital game companies that recruit from modding communities.

One example is the popular mod Counter-Strike, the creator of the game got an offer to work for the game company Valve. Eventually he sold his mod to his employer Valve and Counter-Strike became the first commercial fan-made mod. Another example is the Battlefield 1942 mod, Desert Combat. Trauma Studios, the development team behind the Desert Combat mod had only one goal: “breaking into the game industry and becoming full time commercial game developers” (Nieborg 15). This goal came nearer when this Battlefield 1942 mod had over one million downloads. Eventually the hard work was rewarded by the commercial developer of the Battlefield franchise, Digital Illusions, all the work of Trauma Studios including employees were bought up. This last topic clearly indicates that modders are increasingly motivated to behave themselves professionally. Besides the motivation, the organization of many mod teams are nowadays more structured and professionally organized.

Although it is difficult to estimate the exact value of modding,  the sale of 1.5 million copies of Counter-Strike by the end of 2003 indicates that modding is an important economic factor in the digital games industry. Despite the fact that modders not directly see the value of their content translated in money, it is not uncommon that mods are used as a portfolio in pursuing game industry paychecks. Some modders see the commercial potential of their work. Olli Sotamaa argues that having fun with mod community friends is the primary motivation but the idea of achieving a job in game industry can also play some role (24). You could argue that the role of the modder in the success of digital games cannot be denied.

Looijen, Ferdy. The Professionalization of the Modding Culture. Bachelor Thesis University of Amsterdam, 2012.

Nieborg, David B. “Am I Mod or Not? – an Analysis of First Person Shooter Modification Culture“. Creative Gamers Seminar – Exploring Participatory Culture in Gaming. Hypermedia Laboratory. University of Tampere . 2005.