Matteo took us further into theory-land, too far for some listeners (I did my best, honest!), and a few laptops were opened (not for note-taking, I imagine). His main points can be roughly summarized as:

He argues that competition is fiercer as products become immaterial, as they’re increasingly bound up in the realm of the Symbolic. The propietary logic that corresponds with this has an emphasis on time (i.e. the Age of Access). And the management of products, of ideas and innovations, is a matter of what Pasquinelli calls ‘speed differentials’.

It’s all very spacey, and I’m still waking up, so I breathe a sigh of relief when he starts talking about something as domestic as Barcelona. The city is ‘branded’ and has both cosmopolitan and alternative appeal. Matteo argues that this is a parasitic relationship, with capital keeping the alternative, creative underclass breathing so that it can keep attracting business. That is, “global capital feeds local resistance to gain a mark of distinction”. City fetishism, anyone?

So another question, for Matteo, is this: what next for the precarious worker?

Gill and van Diemen are interested in this question too, and reported on their research on New Media workers in Amsterdam. As they point out, these workers are generally talked about in polarized terms – either cyber-elites or net-slaves (re: D. Coupland’s book J-POD).

Ironically enough, their research revealed even more of these kinds of oppositions. Most of the respondents have love-hate relationships with their work. Being self-employed, they pride themselves in being their own bosses, but are unsure of what to say when asked about pensions and insurance. They love being on the frontlines of innovation, but struggle to keep up with new programming languages. Also, while the respondents say there is no exclusion in their line of work, ‘who you know’ tends to determine how much work you get.

Fascinating stuff, but I’ve got to hand the laptop back to Anne, who’ll be blogging about the third session: Economy of Design 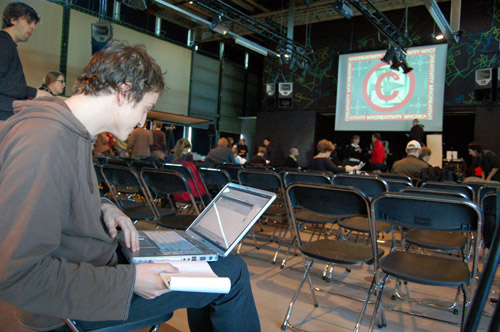 Michael Stevenson is still waiting for the invention of the Notepad to Notepad input
Tags: event, mycreativity, networkcultures
3 Responses to “MyCreativity, First Session Part Two”
Leave a Reply
This blog is protected by Dave's Spam Karma 2: 2705362 Spams eaten and counting...