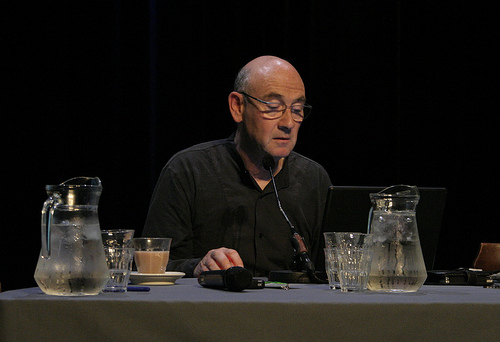 Moderated by Arie Altena, this part of the session the artists Jeffrey Shaw from Australia and the Dutch Marnix de Nijs talked about their work with video, ambient screens and immersive techniques. The session took off with a quote from Paul Ruiz, from the Poetics of Cinema.

In the cinema it is the type of image produced that determines the narrative, not the reverse. No one will miss the implication that the system of film production, invention and realization must be radically modified. It also means that a new kind of cinema and new poetics of cinema are still possible.

This last part is certainly what we saw here. Jeffrey Shaw started with a few works he has been developing over the last years at the iCinema Research Centre in Sidney. Shaw is a creator of keyworks in the history of interactive art and has been working on the field of relations between development of techniques, representation technologies and visualization in order to find a new definition for the narrrative experience.

Shaw is building environments with interactive moving video as surrounding where the spectator is the center. One of the first things he shows us is the installation THE CAVE (1996). The Cave has contiguous projections on three walls and the floor. The user interface is a near life-size wooden puppet that is formed like the prosaic artists’ mannequin; by handling this figure the viewers cause real time transformations of the computer generated imagery and the acoustic rendering. By closing the puppets eyes, it gets dark, when opening again, the viewer enters a new space. The images are on the walls and the floor, but they do make these walls disappear at the same time: Infinity in all directions, cinematic space in all surroundings. It looked like a visual impressive installation but it made me giggle at the same time: Moving the arms and legs of the puppet, and therefore creating this serious immersive worlds seems like a funny contradiction. But, besides the overwhelming techniques, I could not help wondering what was the general message or feeling I should get while ‘playing’ this installation.

Another technique Shaw showed us was a remarkable recording machine consisting of multiple cameras. This camera can film in 360 degrees and consequently is projected on a cylinder screen of 12 meters wide and 4 meters high with 12 projectors. This modern re-invention of the -bullettime- Muybridge pictures, makes sure once you are inside this installation, you are no longer focusing on the screen but more like in infinity. Very much like the Cave installion indeed.
Remarkable enough, the camera’s and projection situations developed by Shaw are not just made for one piece, they can be see as some sort of a structure, appliable by other artists for other pieces as well. This gives an interesting insight on how different concepts are being developed within these same techniques.
An example of this is THERE IS STILL TIME . . BROTHER (2007) from the performance collective The Wooster Group developed for Shaw’s Interactive Panoramic Cinema. 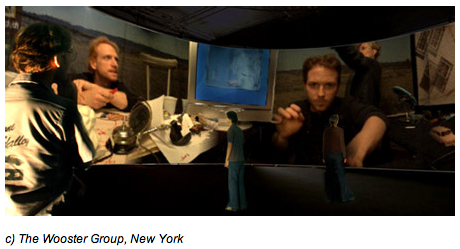 While recording this project the camera is the center of the tale and the set is build around the camera. Different stories are evolving around this camera. They make use of the parallax of the camera: This overlapping disappears after 5 meters, but The Wooster Group films everything close to the camera so they use this parallax in their work. Shaw mentions how interesting it is to see how different people use the same techniques in different ways. The project is operated from a single place in the middle where just the part right in front of you is in focus. The viewer needs to discover a narrative path by zooming into the mindset of the characters.

Jeffrey Shaw’s work is hard to fully comprehend in this 2 dimensional documentation. This is partly caused by the fact his installations are merely based on a physical immersion: The individual is the center of the projection and the piece is best perceived from his point of view. From here we can fully experience the effects of the constructions. With all the things he showed us, I was awed by the technical efforts and possibilities, but unsure about the conceptual or narrative intentions and consequences. 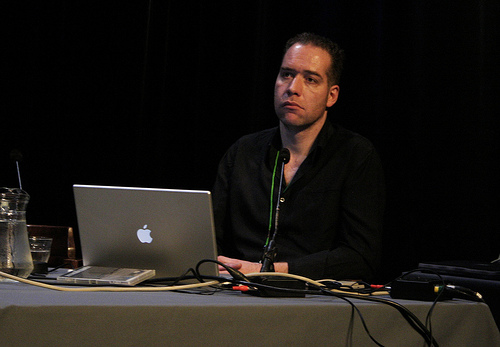 This was different with the work of Marnix de Nijs. Though his field of work and research is also the overlap between the real and the virtual, his basic questions seem more philosophical than technical. Off course he uses technique as his tool (hardware, software) but while doing this he is adressing different non-technical issues. Every piece he showed had a quite clear conceptual foundation.

For example the piece RUN MOTHERFUCKER RUN is a sort of speed up version of Shaw’s THE LEGIBLE CITY. In the Shaw piece you could ride calmly a stationary bicycle through a simulated representation of a city that is constituted by computer-generated three-dimensional letters that form words and sentences along the sides of the streets. In RUN MOTHERFUCKER RUN you were not on a bike but on a treadmill and had the opportunity to feel an adrenaline rush while running through a sort of scary Rotterdam by night. While running on the belt, moving your body to the left or the right, you could navigate through the 8 x 4 meter screen in front of you. By quickening your pace, the speed of the belt as well as the speed of the image increases and depending on your running behavior and the directional choices you make, the progress of the film is determined. It is a film with an atmosphere somewhere between a thriller chase and urban horror. At the same time, you had to stay in the middle of the belt; If not, it would accelerate so much you would end up in the middle again. If you were getting at the back of the belt, it would get slower in order to get you back in place.

The other piece shown by de Nijs is the BEIJING ACCELERATOR (2006) with as basic principle that the participant sits down in a racing-chair on a motorized structure equipped with a joystick facing a 160×120 cm screen. The user controls the direction and the speed of the chair; rotating panoramic images are projected on the screen before them. The aim is to synchronize the moving image with the rotation of the chair. If you don’t do this quickly enough, you will get dizzy. Once this is achieved, the participant is able to view the images properly and the disorientation associated with the uncoordinated spinning is blocked. The Beijing Accelerator is in fact a remake of the Panoramic Accelerator and works with a 3D world based on pictures. Therefore the image-quality is quite high. The Beijing Accelerator is playing with the senses of the person; you have to fight the nauseated and need to get control over the machine in order to feel well.

Core subject to both the work of Shaw and de Nijs is the way cinematic interactivity can enhance the immersive experience. Important seems to be the two sides of movement; On the one hand there is the movement and the perception of the viewer and on the other hand there is the movement of that what is happening on the screen. Within the work of de Nijs we try to synchronize those two by using our bodies, almost in a natural way. With Shaw, we can adjust by choosing perspective and therefore gain narrative influence. This feeling of being non-sync with the world is, strangely enough, not giving discomfort but people seem to find it pleasurable; It is not nauseating, but interesting.