A university professor, after publishing an article about weblogs that provokes a snowball of critical responses from bloggers themselves, is forced to use one of his students’ blog to save his reputation (he does not have one by his own). A teen-ager, through his myspace journal, tells the world how his parents decided to send him to a Christian camp in order to cure his professed homosexuality. A Captcha test, designed with the idea of fighting web spam, prevents blind Internet users from creating an account on blogger.com, thus cutting them off the on-line conversation. These, and many other stories, populate the pages of Uses of Blog, an agile and at the same time dense book exploring the practices of blogging.

As simple and straightforward web-publishing tools, blogs have crucially contributed to democratize the access to the web. Although their shape might be simple and quite standardized, when considered in relation with their usage practices, blogs reveal to be a very rich and variate object. The essays collected in this book (edited by Alex Bruns and Joanne Jacobs) provide indeed a valuable contribution in this direction. Each of them focuses on the peculiar ways a specific discipline and/or social group appropriate of blogging technology. In doing so, social groups constitute new network arrangements and invent new genres of network literature. 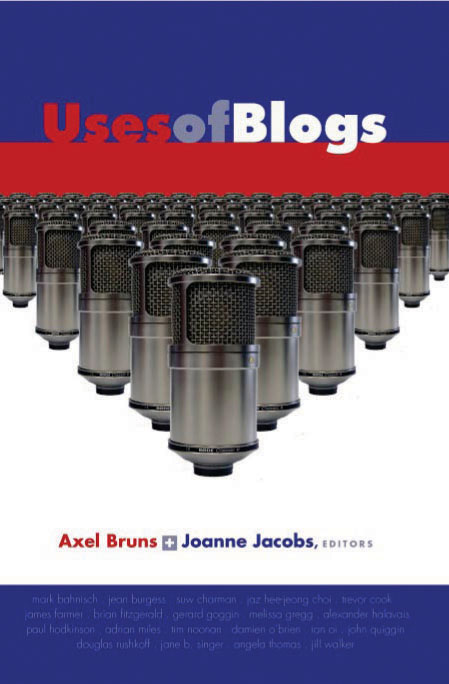 Despite the peculiarities of each contribution, some core concepts thread across most of the essays. Both Bruns and Quiggin discuss the conflict between professionals and amateurs in the context of newsmaking. According to Brums, such a relation is more symbiotic than oppositional, with bloggers commenting and fact-checking news packaged by large media organizations and professional newsmakers taking fresh amateur content “generated” more or less accidentally (think the video footage of the London Bombings in 2005, or to images of the Thailand’s Tsunami in December 2004). John Quiggin, in his piece on Economic Blogs and Blogs economy, further questions the amateur-professional dichotomy, arguing that in his discipline specialized blogs do better economic analyses than the press (at least, better than the US press). This superior quality of economic news coverage is, according to Quiggin, due to the affordances of blogging technology. The hypertextual and non-serial format of blogs does not constrain writers to write back every time the entire background of each economic news, nor force them to lower down the level of the analysis in order to accommodate the average reader.

Many contributors insist also on the Network effects blogging produce. Joanne Jacobs, while discussing blogs within the book publishing industry, notes how several fortunate books have enormously benefited (also in terms of sales) of blogs. Through them,  the publishing house discloses to the public part of the writing process. They also support authors with a feedback channel with readers, useful both to enforce their authoritativeness, both to enlarge their potential market share ( some noticeable examples include: Howard Rheingold’s Smartmobs, Lawrence Lessig’s Code, and Dan Gilmor‘s Making the news ).
From a different prospective, Jean Burgess describes how – by adopting blogs as a formative assessment tools – she tried to involve her students in a peer learning process  based on mutual construction of knowledge. Burgess sees here the network effect of blogging as desirable. These mark-up the passage from a simple activity of textual production (the mere delivery of a written essay) to a much richer social interaction involving both the peer group and the outside world.

Blurring the boundaries between the private and the public

Yet another common direction of investigation seems to be perhaps the way blogging practices re-define the boundaries between private and the public spheres; personal and the political spaces. Social Software specialist Suw Charman and PR expert Trevor Cook seem to follow this track while discussing blogs in business culture. The first notice how making the invisible work of employees visible through intranet blogs constitutes at the same time a risk and an opportunity for business organizations. The second observes how the individuality and the personal touch that blogs allow to express tend to enforce costumers relations and brand identification dynamics. Ultimately, a very thought provoking contribution comes from Melissa Gregg who reflects on the gender politics of blogging. According to Gregg, the relative majority of male written political blogs and female personal journals (with “Knitting, cooking and cats” as preferred topics) seems to confirm that traditional gender based role-settings and assumptions about what is political and what is not are often perpetrated and reproduced also on the blogosphere.

With its rich set of views and voices, uses of blogs is not yet an other book on blogs. Its a good theoretical and practical toolbox that may come handy in re-thinking your own new media practice.