Short presentations, few both clickable art visualizations and physical artistic prototypes from presenters, and conglomerated art projects without neither explicitly separating lines nor accessible explications for the few curious ones is the best way to describe the first impressions of Picnic’s 2008 E-Art virtual platform. At least from the very first hours.

As announced on the Picnic website the E-Art dome was aimed to show ‘art, research and development through a series of show-and-tell presentations’ and therefore to be in some way the cultural, artistic and even popular side of the commercially oriented PICNIC event. In this sense, the E-Art platform did well, considering that this art platform was simply able to exist within this huge business event, but improvement can always be made. And with this I mean: mechanical websites projects such as Danja Vasiliev’s ‘m/e/m/e 2.0’ could have been nice seeing it work from the very beginning; screened graphical data prototypes such as Gordo Savicic’s ‘Chakramat’ installation would be more entertaining had it been projecting new different human data every time (by inserting a new coin); displays such as the one installed for the Web 2.0 ‘Elfriendo’ project could have been very useful to see on-line; or visual projects such as Michaël Samyn & Aurica Harvey’s ‘The Endless Forest, Tale of Tales’ could have added to our pleasure if the overloaded system hadn’t needed to be restarted. But once again these were the very first impressions, which I hope were improved by the end of the day (week).

In any case, it needs emphasizing that there is no excuse to organizing a diminutive art platform, with presentations and art projects that lack qualities (of course, not in all cases), for the sole reason that it had the chance to be presented alongside a corporate event which main purpose, of course, is to make business instead of disseminating art. It is a fact that E-Art was a free access platform (whilst prices varied up to 595 euro ex VAT per ticket for 1-day access to a Picnic conference program, for example), so it wouldn’t be fair to depreciate the projects presented in the dome by claiming it has less potential than the big conferences around it and therefore be underestimated by audiences or even makers as well. According to me these impressions could be improved just by offering more space (for instance, both inside and outside the dome), more media promotion and sponsoring, and especially more continuous interaction between makers and audiences while promoting the interactive human/computer devices (and not just placing an explicative brochure on a table in front of the projects in order to inform the people, as some, but not all art groups did). Using presence, then, as the key element to generate presence and expand; of course not in order to compete with the big ones, but just to remind ourselves that culture and art are closer meanings to the real signification of terms as picnic than business contact-making.

And talking about presence, these pictures provide a nice image of the first captured impressions of E-Art 2008 (pic. 1) made by MADlab Usman Haque, Bengt Sjölén and Adam Somlai-Fischer’s ‘Wifi Camera‘ project. 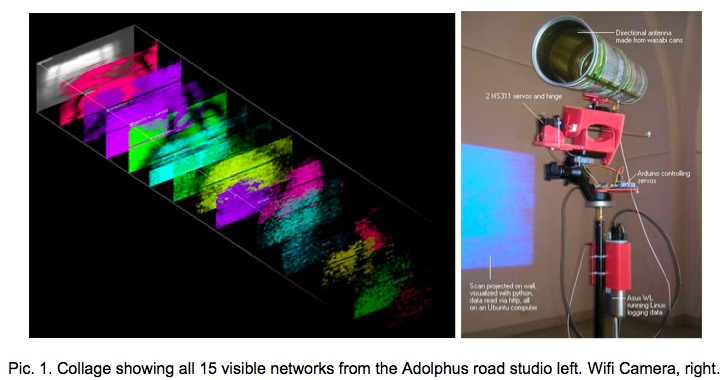 Not in terms of capturing exactly the image of the E-Art white dome, but in terms of the technique being used to capture the environment inside E-Art. In other words this project, the Wifi Camera, revealed the electromagnetic space of devices, in particular wifi networks, which were present at the E-Art dome by making images with a single pixel camera (light sensor in a tube made by two cans); scanning thus the ‘wireless landscape’ of the E-Art dome. In this sense, Wifi Camera uses the principles of the camera obscura in which light comes through a hole and projects an inverted image of the exterior scene against the opposite wall and therefore making visible inside the environment of the outside. Similarly, Wifi Camera is aimed to make ‘visible light’ as well through electromagnetic waves of our devices and the shadows that we create within such spaces. As the makers in their website put in: ‘One of the most important intentions of the project is to develop a 21st century notion of the “picturesque”, which encompasses the space of our electromagnetic data bodies’. In this context, this project reveals notions of the invisible presence of ourselves in the environment that we have created and continue to create by passing through, translating it into noisy colourful images. And in doing so, uncovering new aesthetics of photographic arts by remediating ancestral but elemental photographic techniques. And this is exactly the way I wish to end this post; by showing the presence of a past (made by photographer Abelardo Morell) present in a derivative way at Picnic by means of the Wifi Camera project. In other words, here are some of my further connotations from the first captured impressions at E-Art beyond E-Art. 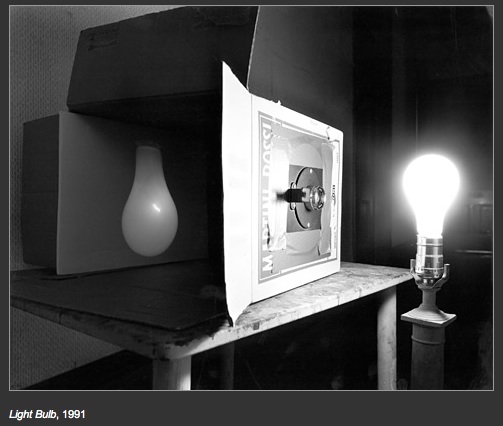 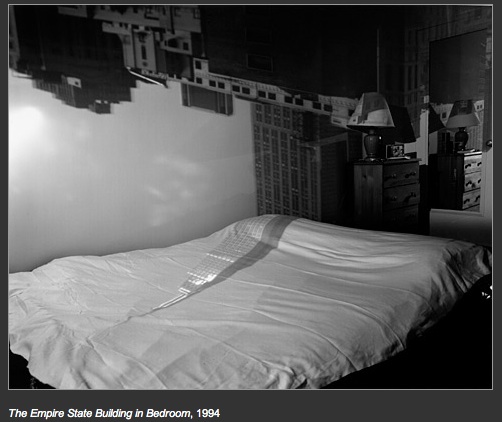 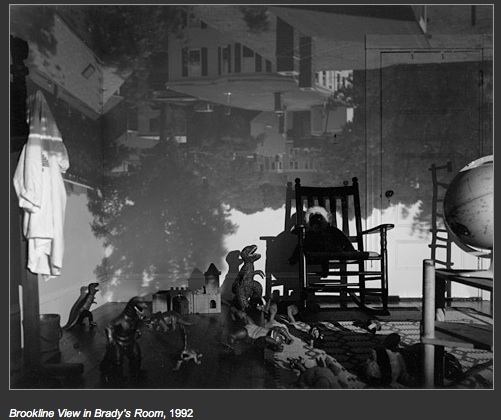 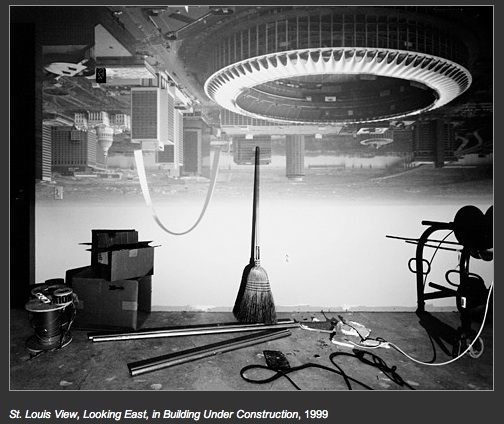