The Long Now Of #picnic08: Microblogging And Networked Social Awareness In Live Events

Rather than reporting on a specific keynote, I would like to focus on something that has been experienced behind mobile screens and not on in front of the festival stages. Such phenomenon can be approached both as an emerging genre of network literature, as well as a very contemporary and technologically mediated feeling of social awareness and connectivity. 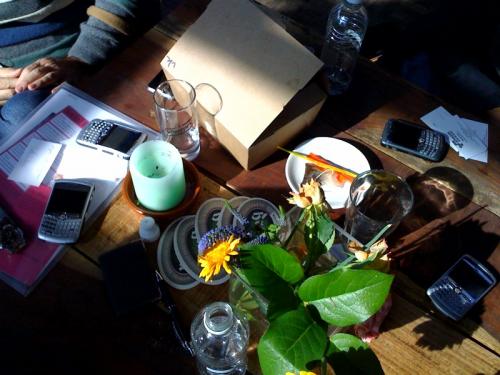 a Blackbarry gathering, picture taken from the Picnic Live Report

While discussing the intangible informational overlays of today’s networked cities, Adam Greenfield has suggestively named such a feeling “The long now”. According to Greenfield, the data-spaces we inhabit and act within through wireless networks and mobile devices should not be treated as a purely virtual reality. Indeed, these conversational spaces affect  social behavior as much as physical architecture does. From this prospective, “the long now” is a new space of action opened by an enhanced awareness of the city in its changing states, an augmented perception of parallel presents and multiple possible futures. 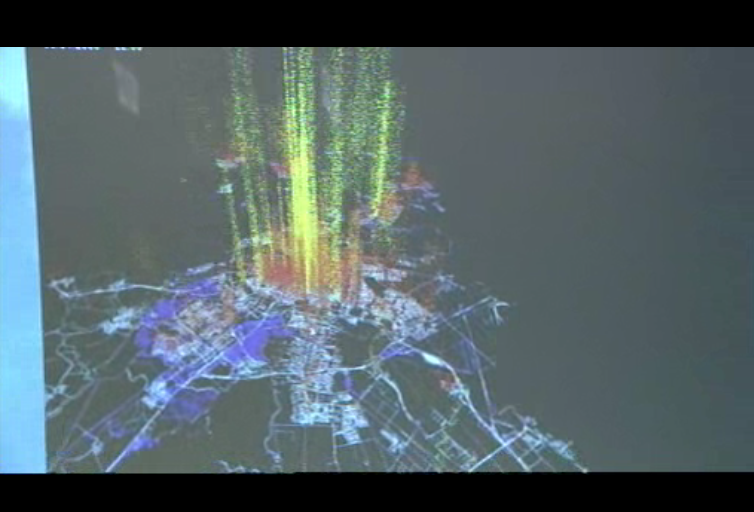 I believe that I have partially experienced this highly mediated reconfiguration of the time-space perception while attending Picnic. As many of the data visualization projects presented within the festival have eloquently shown, events are powerful catalyzers of network activity. MIT Sensible city lab projects, such as NYTE (in collaboration with Aron Koblin) and Visible Amsterdam, use networks as sensors to capture and analyze part of the social dynamics of the city. In Visible Amsterdam one can clearly see how a national event like the Queen’s day eve concert in Museumsplein on 29 April results in a high load of the mobile network infrastructure. In a similar way, the three days of Picnic have been accompanied by a huge amount of conversational activity taking place in different web spaces. I have been following closely such activities on Twitter, where a most likely non-human actor at 09:38 AM of September 25 has announced #picnic08 as the top trend of the day  (followed by others like #haikuthursday, Grey’s Anatomy, Bush, Bailout). In the Twitter jargon, a trend is a popular topic of conversation, a word that, within a pre-defined time interval, recurs with particularly high frequency in the total amount of status updates at a certain time. Although much less spectacularly than in Visible Amsterdam, one can now see the heart-bit of the Picnic-related tweets frozen in a graph. As a twitter trend, #picnic08 has lasted for almost all the three days of the festival, reaching its peaks at about 10 o’clock, during the morning keynotes.

the #Picnic08 trend, visualized through the Twist service

Festival organizers have managed to capture part of this conversational micro-blogging activity by simply asking participants to tag their pictures, videos and status updates with the keyword “picnic08” and have aggregated them back into a mashup. What was accessible in the Live report section of picnicnetwork.org was thus not an edited report of the event, but a “real time” stream of multiple views and thoughts aggregated from different web sources (Twitter, Flickr, Vimeo, Youtube and the dutch service Mobypicture).
This overlapping of a live event video streaming and a real-time conversation taking place on the internet, seems indeed to be an emerging media format. Cable channel Current TV has done a very similar mix-in with “Hack the debate“, an ongoing media initiative where Twitter’s status messages are integrated in real time over major portions of TV broadcast of the American presidential debate. One could arguable remark that the implementation of more or less open feedback channels into media events is not at all new, but has been experimented already in endless hybridations of broadcast channel and many to many communication ( phone calls in talk shows, mail in newspaper, sms text on MTV videos, IRC channels in Internet conferences).

Conversely, some peculiarity of micro-blogging make such kind of mixes quite interesting from a media studies prospective.  What most radically differentiates a service like Twitter from traditional Internet-based messaging (think to service like IRC, ICQ, YIM, but also more recent protocols such as MSN, Jabber and Skype), is indeed a different status accorded to the information bits exchanged within the system. Although the service provides the possibility to restrict the access to a user’s tweets, its default settings treat those as public statements. Thus the whole practice of exchanging updates is framed as a publishing activity, no matter how trivial and ephemeral their subject may be. Consequently, the conversation space created by the service, is meant to be publicly accessible (although with different policies) both to human web surfers and automated engines. The recent acquisition by Twitter of search service Summize with the consequent implementation of a search functionality and an anonymous API can also be read as a step further in this direction.

Certainly, these emergent new media practices come with serious privacy implication since they blur even further the boundaries between private and public spaces. By adopting the suggestive prospective proposed by Anthropologist Geneviev Bell, we notice how contemporary social software forces us to rethink the ways we shape and negotiate our social identity on-line. Whilst a growing part of inter-personal relations are captured and augmented through algorithmic structures and digital networks, individuals need to re-define their information disclosure strategies and fine-tune them to the rules of the new conversational spaces they inhabit. While certainly generating new risks for society, micro-blogging and web-based social awareness technologies also provide exciting opportunities for media studies and social sciences in general. In the act of remediating into written-form conversational activities that where formerly oral and therefore volatile, these technologies also open up new fields for empirical research.

Considering an event like Picnic as a possible case study, we clearly see the potential of these new data-sets now publicly available on the web. Persistent records of on-line conversations can now be interrogated and dissected in both their chronological an spacial dimensions. By tracking the affiliation links of the different twitter users mentioning #picnic08 in their updates, it is now possible to produce a complete social graph of those festival participants active in some form of on-line debate. When compared with direct observations, analysis official accounts and traditional media coverage, conversational data may result extremely valuable in gathering a broader and thus more accurate understanding of an event and its social and political impact.