Review of “The Blogging Revolution” by Antony Loewenstein 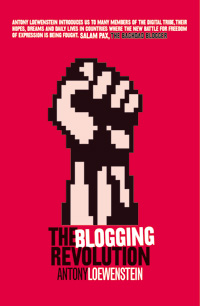 This book, named “The Blogging Revolution” is written by Antony Loewenstein, an Jewish-Australian free-lance journalist, author and blogger. During the year of 2007, he travelled to Cuba, Iran, Saudi Arabia, Egypt, Syria and China for interviewing bloggers in order to discover the blogging life under repressive regimes—-because these countries are more or less have some limited on their political environment. The author Antony Loewenstein wrote down his investigations about bloggers in a story’s speaking way other than a boring narrative way, at least it makes me feel so interested in.

Antony thought journalists were inherently skeptical about power, but later he found that the role that journalists play is not to offend the powerful. In these countries, the debates he met like unparalleled democratic expansion etc. were even often a matter of life and death.

In Iran, the Islamic government has blocked thousands of keywords, which are almost about those sensitive words which can’t be talked in public under the environment of religion. However, more and more bloggers are showing up, and a large number of people online to challenge clerical rules and push changes. Bloggers begin to dare to speak both in English and Farsi while concerning about the western world’s opinion. Especially for young people in Iran, dissents and the hope of reform is discussed popularly. However, no one could ignore the height of political engagement in Iran, only people could bring true reform. In Egypt, human rights are limited while there is a “schizophrenic” relationship between internet and government, and even the whole country is influenced and oppressed by the Muslim brotherhood. Political Organization in Egypt control the development of internet communication. In Syria, there is a strong hand of security. Although people want to know about the non-Arab world, authoritarianism has never made this happen. Internet is so slow in Syria and the whole country has no interested in western-style reform. Saudi Arabia’ natural environment of desert becomes a natural barrier of the blogging and internet community. Amongst these four countries above, women are always a low-class citizen because of the religion, but this situation is changing, we can see a lot of female bloggers write and show their dissents through the internet. However, woman plays a small role in Saudi Arabia. There are some excellent bloggers there as Al-Farhan, would like to change and reform this country’s close situation, but the kingdom’s attitude make democracy activists feel more isolated.

Generally speaking, the four religious countries in the middle-east need to reform, but due to the problem of religion, political organizations and the government always limit the speed the internet and block the website in order to control people in a narrow thinking way. According to what normal people’s questions to the author, the only thing about western world and middle- east is that the Iraq War. However, a large number of young people and even female are beginning to use blog to know the western world and show their own criticism and opinion about the government.

In the next two chapters, the author Antony began to describe two socialist countries: Cuba and China. Cuba is totally dominated by Castro, and tourists are inspected by special officers. The communism there seems not to be real “communism”, because the construction is undergone slowly and citizens are so desperate about their lives. The economy OF Cuba is terrible, and only no more than 2 percent Cuban people could access to the web. Astonishingly, there is even few blogger in Cuba—-which make it possible that many Cuban people choose overseas lands (e.g. Miami) to show their objection to Castro’s regime. The lack of public’s dissent causes poverty, fear, awful connection etc. to some extend. New technology in Cuba is so minimal that only internet cables and various bloggers cannot solve the democracy problem. Surface observing, China seemed to have the same situation as Cuba because of one-party rule as well. However, it is totally different. China has the largest number of netizens(228.5milliion),while in America the figure is 217.1 million. In every ten netizens of Chinese, one of them has blog. According to his interview, the widely use of blogs in China still can’t change the situation that people can speak anything. A lot of words which Chinese government think would mislead its citizens might be deleted and disappear from the internet. Big web companies as Google, yahoo, Microsoft are all feel obnoxious about Chinese government’s limit. Chinese people seemed not be bothered by filtering websites. Analyzing  the main feature, it is concluded that those control won’t be forever.

This book is not boring at all, in contrary, I felt like I was reading some traveling dairies or watching some TV interview programmes. What he said in this book is in an objective enough way. As a Chinese, I am very interested in his chapter about China, and it is undeniable that this is my first reading about westerner’s research on Chinese’s media situation. I am intending to show my own opinions on those doubts he referred in this chapter.

One-Party rule of China is never a problem for Chinese people to worry about. Since the moment we born, we live in a “one party” country. During those school years, although Chinese people feel kind of boring about those “party ideas” learning, it is never a big matter. Because China has 1.4 billion population, amongst which people have different education background and different recognize about the world. This makes it possible that a little shake would shake the whole China. So that filtering information seems to be essential. Since I have majored in journalism in China, the control referred in the book that “leadership reshuffle should only be republished from the Xinhua News Agency” is the first lesson we learnt when the news report writing course started. Although in the one-party rule country, leadership is never transparent as western countries, China is trying to make the leaders more closed to normal people. Antony has also mentioned that we have the websites to communicate with leaders and even chat online with them, which is hardly to imagine 5years ago. About the “key word” filtering, I agree with the author, however, there are a lot of young Chinese people want to know the content that are blocked as me. The young generation also realizes the bad side that information blocking will probable influence a country’s development, as the example of Cuba. In my opinion, China still has a long way to go to open the information enough to its citizens. We should open step by step. For example:Tibet and Taiwan, the two ”T” are the most sensitive words in China now. It is obviously that the government could predict the reflection that when western comments about these “T” come into China through the internet, if it was different from what we learn in the motherland, the reflection must be the worst, which may even threaten the domination of the party itself. China is a country with 5000 years history, which make it has various prosperous culture. ”Family Union” is a conception which has been passed by generations thousands of years ago. As what we learn from the history book since childhood education, Tibet and Taiwan are always parts of China. The history and the tradition conception make Chinese people so intensely to show their opinion. And that is what we saw before the opening of 2008 Olympic Games. As far as I am concerned, the education is a key part for the “revolution” of information area. Chinese government needs to collect the western information about China and put it into education, which could make Chinese people absorb information in a positive and objective way. Besides, since there are more and more bloggers in China, discussions in blogs indeed bring people more thinking ways. I believe that China will not control the internet communication forever. Its fast increase of economy demands the world-wide information.

Blogs is a place that people talk everything freely, although in some countries people still can’t show their own opinions about their country and government. The reasons relate to the religion, belief, political organizations, the party…Although there are a lot of bloggers are fighting for the reality of democracy, there is still a long long way to go.

One Response to “Review of “The Blogging Revolution” by Antony Loewenstein”
Leave a Reply
This blog is protected by Dave's Spam Karma 2: 2705362 Spams eaten and counting...