About Rakesh Kanhai
New Media MA student, All-Round Turntablist DJ, Media Addict, Pro Evolution Soccer and Gears of War Champion of the world, and as of now: a Blogger... Recent theoretical interests : Lessig, Jenkins, Deuze, Gerd Leonhard (Music 2.0), Kevin Kelly and the such... Right now i'm very interested in the 'future' of the Music industry('s), its convergence with other industries and the way artists challenge precarity with creativity in contemporary conditions... 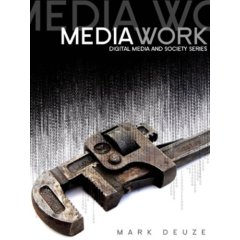 All optimism associated with studying to work in the media industry dies by the time a student tries to actually find a job after graduation. Working within media industries is often much more uncertain and much more complicated then anticipated. If one is lucky or persistent enough to find a suitable job, there is no job security and  the experience acquired in one actual workweek is often more useful then the four years of studying preceding this.

Mark Deuze‘s Media Work excellently bridges the studying of Media and the actual working in the media. It offers a great introduction to the contemporary issues and challenges future media workers will face. Media Work can be seen as a more critical and less utopian approach to many of the same concepts introduced in Henry Jenkins’ Convergence Culture .The concepts (convergence, prosumer, collective authorship, networked community) are in a sense stripped of their optimism by the critical analysis of the actual industry. Mark Deuze introduces a new term to illustrate the increasing uncertainty within media work: Precarity. This concept is central to the new work mindstate in a increasingly mediatized and liquid life, in which work and play are increasingly unseperated.

Job security is something of the past in the media industries.  Deuze explores how flexibility and a portfolio worklife have replaced long term commitments between employers and employees.  He explores the ramifications of the constant state of flux in ‘network’ society from the perspective of the media worker in several industries; advertising, journalism, movies and games. His book explores the many issues associated with media work in a contemporary life which he calls: Liquid Life. He uses this term coined by Zygmunt Bauman to describe the way all elements of life and work are organized in media. Media is the field in which the former dimensions of work and play, public and private, local and global, and lived and mediated come together in an increasingly culturalized world. Deuze also stresses that not one factor is responsible for these above mentioned trends, it is a complicated combination of globalization, privatization, individualization, increasing innovation in information technologies and lassez faire economic politics.

In my opinion this book offers a critical counterpart to all optimistic theory associated with the new networked world of Web 2.0. The increasing agency and economic possibilities for users associated with books by Kevin Kelly, Chris Anderson and Henry Jenkins are partly shattered in a more critical and realistic description of the industries and the way it adapts to new users and practices. Optimistic terms like collective authorship, prosumer and participation culture are sharply contrasted with terms like outsourcing, globalization and precarity.

In short: a must read for aspiring media workers.