Book Review of Political Campaigning on the Web

The brand new (31th of August 2009 according to Amazon) book “Political Campaigning on the Web” is a bundle of essays around the relatively new field of political campaigning in new media in its broadest sense. The book contains a broad spectrum of different sides of campaigning. Sigrid Baringhorst wrote the first chapter, which places the field of political campaigning on the web in its historical context. From there the book takes you through a bunch of interesting topics and analyses, from political party campaigns to web activism and petitions. Those articles end in a conclusion with interesting proposals for further research.

Professor Sigrid Baringhorst, from the Social Sciences Department of the University of Siegen, places campaigning on the web in a long tradition of campaigning. The historical context gives a nice basis for the rest of the text to distinguish the old from the new. Baringhorst points out that the internet- (especially broadband) penetration was very limited until a few years ago. Political campaigns seem to adapt on that fact. Political parties used the web as an extension of their whole political program, mostly as a ‘digital flyer’. Sarah Zielmann and Ulrike Rottger made an interesting chapter about the differences between presidential web cam

paigns in France, Germany, United Kingdom and the United States. Zielmann and Rottger analyzed the period between 1997 and 2007. It began with digital flyers, but especially the United States added new tools to their repertoire. 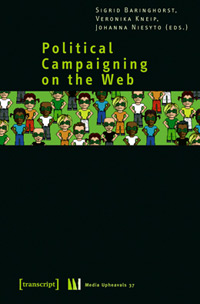 Johanna Niesyto wrote a very interesting case study about the web campaign of the European Union after the Dutch and Irish decline. The campaign showed the possibilities, but also the struggles. It is hard to combine the different languages and cultures into one website, with one logo and multiple languages. It becomes even harder to start a conversation. Niesyto illustrates that problem with a little research on the comments on YouTube. A good conversation seems to be impossible, because of the different languages, but also on the lack of qualitative comments. The few ‘better’ comments are followed up by a lot of garbage in different languages. I think short case study’s and findings like this make the book really useful.

Like always, power and counter-power go together. Not only political parties use the internet for political purposes. Activists, hackers and protests movements can be also found on the web, which Jeffrey Wimmer, Rainer Winter, Veronika Kneip, Lorenzo Mosca and Daria Santucci. Wimmer try to cover. The authors talk about different topics, but in their some similarities in their findings. For example one of the major challenges is too build a participatory group. It seems to be hard to use a web only strategy, because the bindings are too weak. On the other hand, it is a lot easier to start an international campaign or movement. Online petitions for example are easy to start, and can grow very fast, but the question is how strong is the connection between the ‘members’ of the group.

Ralf Lindner defines in a concluding chapter what I think is the major research question (in a broader sense):

Further research will be needed in order to examine to what extent the observed linkage between democratic views and communication practices can be verified for different political and cultural contexts and to what degree power exert influence.

‘Political Campaigning on the Web’ last chapter is an interview with professor Geert Lovink by Johanna Niesyto. Lovink argues that a lot of company’s, NGO’s and movements only use a fraction of the possibilities. One of the problems according to Lovink is to couple it to identity. “Activism is an activity but not an identity”. Lovink argues that political parties focus too much on campaigning around the elections. Social media make it possible to communicate directly with your voters. He would like to see much more experiments. We shouldn’t only update our old models, we should at come up with at least one major one from the 21st century. One of the biggest opportunities is the speed in which you can raise your (new) movement, says Lovink.

To conclude, web campaigning, and political campaigning in particular, offers a lot of opportunities for politics. But until now, research on this topic is very limited. The quick development makes it even harder to research. This book contains a lot of examples of web campaigning, where new problems arise (like for example the language/culture problem the European Union encountered). I think the historical context is very helpful to study this new form of campaigning.

A little critical note; the book sometimes seem to be a bit dated, but maybe that just illustrates speed of the changes in political campaigning. It also don’t mention Obama’s strategy (at least not very much), but that can also be seen as gift after all the documentation about that particular campaign.

This very nice book gives you a good (but incomplete) overview, but also raises a lot of questions. The answers of those questions will have big impact on information driven societies. We struggle to fit the old models of campaigning into the new media, but like Lovink said, it might be better to come up with some new models as well. On the other hand there are enough possibilities, and the question is not if we will use them, but who and when will. Remediation seems to be just the first part of the new medium. Political campaigning on the web has just started, and this book can be a helpful start.