What is Causing the Decline in Wikipedia Participation?

About Sarah Moore
I am a MA New Media Student at the University of Amsterdam. I received my bachelors in Radio-TV-Film and Sociology at the University of Texas in 2007. I am interested in graphic design and media arts. Currently working on a website about life in Amsterdam http://www.muntthee.com/.

Wikipedia is considered to be the largest online database of information. Launched in 2001, Wikipedia has had exponential growth and have celebrated it’s 3 millionth article in August 2009. However, in the past month, both Times Magazine and Fast Company have written about the decline in user participation in Wikipedia in the last two years. In 2006 declines in the number of article posts surface and in 2007 users began participating less frequently in editing articles.

Times pointed out one reason behind this decline.

The site has simply hit the natural limit of knowledge expansion. In its early days, it was easy to add stuff. But once others had entered historical sketches of every American city, taxonomies of all the world’s species, bios of every character on The Sopranos and essentially everything else — well, what more could they expect you to add? [1]

This is certainly the case with Wikipedia. In my own attempt to write a new article on the site, I had to research for possible topics for several hours before finally finding that an article on “Krause Springs” had not been published yet. Creating  new articles in English are especially difficult now that millions of articles have already been published.

A more significant argument on the decline of Wikipedia correlates to the rise of editorial management on the site. One of the major criticisms of Wikipedia is the power the site community gives to certain users to edit and delete articles over others. Fast Company writes,

Those passive editors who make just a single change per month see around a quarter of their changes erased or modified by other, more active editors (the rate was just 10% in 2003). [2] 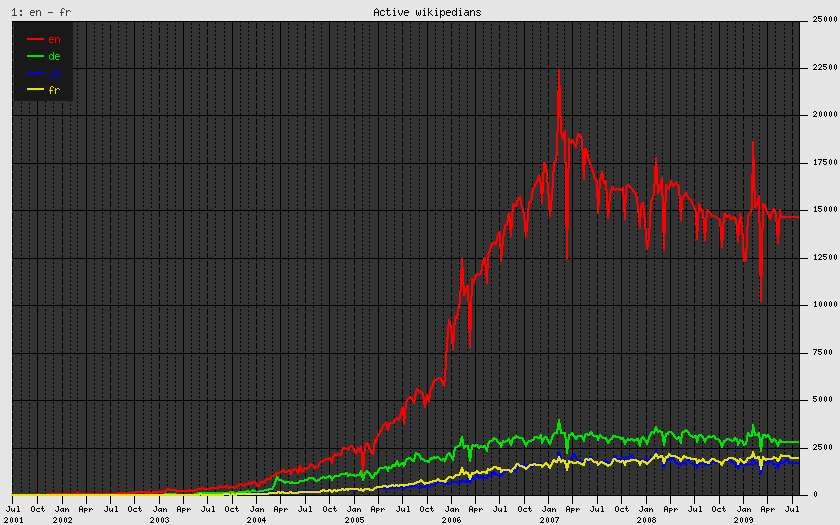 Number of users are declining

System Operators on Wikipedia are given more access to the site and therefore have more power than other users. [3] In the past few years, Wikipedia has become more aggressive in editing and deleting content which is a positive move to become a more “reliable” source of information, but also extremely negative in terms of attracting new users to participate and give their own opinion. If potential new users attempt to publish articles only to have them heavily edited or deleted, these participants become discouraged and revert back to just being passive observers, thus perpetuating the already slanted demographic in the Wikipedia community. In order for a more diverse population to participate and for future growth to develop, Wikipedia will have to create a more user friendly system where new users are not constantly battling with Wikipedia authorities to participate in the community.

Tags: decline, participation, wikipedia
3 Responses to “What is Causing the Decline in Wikipedia Participation?”
Leave a Reply
This blog is protected by Dave's Spam Karma 2: 2705362 Spams eaten and counting...