Foursquare: Are the benefits of locative social media limited to cities?

FourSquare has recently been described by bloggers as the next great micro-updating service – a geolocative platform that could compliment and even overcome Twitter.  Some are even guessing that with its built-in impetus to visit local businesses, it may achieve the holy grail of start-up social media services and actually turn a tidy profit. Foursquare, a handy application run off mobile devices, incorporates elements of Twitter, Yelp, and the city-based games such as Can You See Me Now or PacManhattan.

Users ‘check-in’ at any given spot in their home city, garnering points and leaving bits of advice or brief reviews.  After checking in, you can make a note for other users of what nights a bar has drink deals, or what dishes to order at the newest pan-fusion-speakeasy concept.  Foursquare also has its antisocial uses.  A favorite anecdote of a past roommate, possibly apocryphal, had an editor of an online magazine download the app along with her ex-boyfriend specifically so the two would never accidentally cross paths.

But these capabilities are by-and-large covered by other social applications.  What makes Foursquare so addictive is the competitive aspect of the service.  In essence, it’s a game that the user plays against her friends, and against her entire city.  Whenever she visits the local frozen yoghurt place, she is awarded a point.  If she is rabid fan of fro-yo and visits the establishment more than anyone else in a week she becomes the ‘mayor’ of that establishment.  Digital political office is not the only distinction you can garner on FourSquare.  Users can also win badges, which offer awards to those who check in at unusual locations, for instance, at karaoke joints, or check in with great frequency or at wee hours during the week (the amusingly named School Night badge).  In New York, it was not unusual to watch my techno-nerdy friends glance at their iPhones and let out a squeal of pride at having earned a mayorship.  It all seemed profoundly silly at first, until I learned of the real-life rewards for an imaginary accomplishment.  Savvy business owners often bequeath their mayors with free drinks and discounts, and in turn give customers a strong incentive to return. 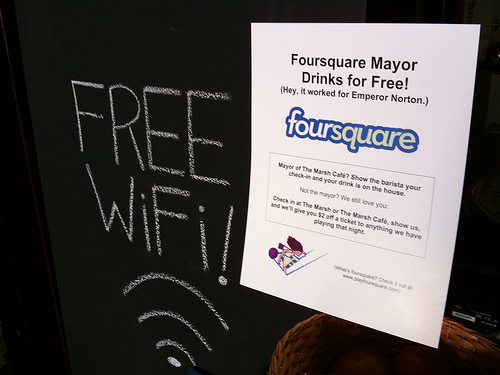 It's good to be the mayor: Benefits for the player and the business.

It was no mistake that I first heard about FourSquare in New York, a city where finding the next new thing is practically a civic sport.  Rhapsodizing to your friends on that secret hole-in-the-wall dumpling stand or sharing your souvenir menu from WD-50 carries an undercurrent of amiable competition.  Who got reservations at the trendiest eatery?  Who attended the most outrageous art opening; who got dressed up as a circus hobo and danced in a secret boat in the wilds of Bushwick?  Everyone wants everyone else to know where they went, and FourSquare not only enables you to do that, as Twitter does, but it awards your adventurousness and then saves your impressions in a database of reviews.  It’s only natural that New Yorkers, and others in large, cosmopolitan cities would embrace a service such as FourSquare.  The average dweller of the modern megalopolis moves through so many locations in a given day and witnesses so many events that FourSquare becomes a way to categorize chaos and give meaning to these meanderings.

The founders of foursquare are currently taking votes to make the service available in more cities, and they hope to expand everywhere, much as Facebook began as an enclave for ivy-league schools and then expanded to other colleges and then to anyone with access to a modem.  Yet despite this interest in growth, the fact that geolocative updating meshes so well with city life makes me wonder if it is not just best suited but only suited to city life.  It’s hard to image someone in a small town bothering to check in the local watering hole if it’s the only bar in town, or to aim to become the mayor of a park when there are no competing cultural institutions.  Foursquare also seems to be relevant only to those who have the free time to explore locations besides those which are strictly necessary – in other words, the young, childless, or relatively well-to-do.

My question, then, is whether city-centric services such as Foursquare are merely natural manifestations of differences in demographics, or whether they serve to subtly reinforce the cultural differences between the urban and rural-suburban.  Are country-dwellers disadvantaged in any way by the fact that locative social media platforms overwhelmingly favor those who live in cities?  Foursquare encourages documentation of past travels, deepening the individual’s sense of place and belonging, and encourages contact between friends and awareness of those friend’s activities in the real world in a way that Facebook or Twitter present in a more abstract manner.  It seems it would be useful to translate these benefits to the suburban and rural realms, specifically in areas where the user is less likely to have frequent contact with their peer group?  If so, how might a service such as Foursquare be adapted to be made of more use in areas where the population and points of interest are more diffuse?  It’s tempting to imagine the competitive nature of Foursquare adapted to other pursuits that encourage record-keeping: for instance, giving points to gym rats for the types of exercises they do, or giving points to bird watchers based on the number and rareness of species seen.

On a separate but worthwhile note, it is interesting to wonder how locative social media such as Foursquare might be used for more pressing needs.  If the Philippines had the text-revolution, and Iran had the maybe inaccurately attributed twitter-revolt, it is not difficult to image that service that is geared towards specific locations will not prove an even more effective means of political organizing. Not only would the user have a specific address, but could see in realtime how many comrades are already there and the frequency with which new recruits arrive.  Of course, these very features might provide too-specific statistics for governments looking to quickly quell any disruptions.  If Foursquare picks up users and media attention as Twitter has, it will be fascinating to watch how this infant service matures as it moves from the app de jour for the me-generation to a more useful tool for businesses, dispersed individuals, and social movements.