The video game Grand Theft Auto IV (1) breathes violence. Not only does the title, which is the police term for motor vehicle theft, indicate this matter of unlawfully conduct. Also the story line and goals that need to be fulfilled in order to complete the game are dripping with blood. Now this violent character holds a connotation. That being that a violent world is usually filled with though and merciless male gangsters.

Since violence coincides with the male, as being prone to terms like strength, power and dominance. GTA IV could be seen a very masculine video game, since the content of the video game contrive these notions. This in contrast to the feminine, which connotates the soft, caring  and subordinate. For these notions there is little space in a criminal world. These contrast still exist in modern day society, and there are many connotations of notions which contribute to the contrast between the male and female.

Judith Butler argues in her “Gender Trouble” the question of the ‘male’ and ‘female’. Butler is of opinion that the biological sex (nature) is different from the gender (culture). Sex is what you are defined by male or female, this is a given. Gender on the other hand is based on a construction of thoughts and ideas.(2)

How are these thoughts about gender and sex being proliferated in a video game such as Grand Theft Auto IV? I have chosen to focus upon three characters from the game, each representing a certain gender bias. These three characters are: Brucie Kibbutz, Elizabeta Torres and Bernie Crane. Before I start to explain these characters I would first like to explain why I have chosen to use the video game GTA IV as an example. In my opinion this video game has a strong history in criticizing the social.

From the first Grand Theft Auto game on, the producers always emphasized on the stereotyping of different social groups. Whether these groups consisted of Italian mobsters or a group of west coast gangsters. In Grand Theft Auto the behavior and presupposed rules for stereotypes have always been illustrated as an performance. An exaggeration of the already known, a parody of the social so to say. This parody on the other hand gets so accurate towards modern day society that it no longer can’t be ignored as ‘ just a game’ or as a non serious social critique. Furthermore a video game which uses the term Luddite in one of the cut scenes is highly aware of the digital culture in which they operate. As Soraya Murray writes in her “High Art/Low Life: The Art of Playing Grand Theft Auto“:

“By learning how to effectively navigate a simulated body within this manifestation, the quality of place comes to life. As such, it represents a compelling human-computer encounter between informational space and lived space. And it is through unscripted, performed, free-play in this highly-articulated place that the potent social critique underlying Grand Theft Auto snaps sharply into focus.” (3.) 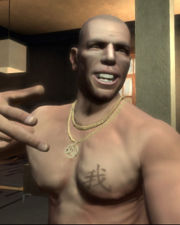 Here the character of Brucie Kibbutz is shown. Brucie is in GTA IV being portrayed as a heterosexual white male. A super heterosexual, who takes every opportunity to tell about how he loves women and how many women he dates. Although Brucie also has an extraordinary love for the male body. Brucie also brags about how good his body physique is and that he likes to work out as much as possible. During the game and through the interaction with Brucie the player activate the gender performance of Brucie. The way that Brucie is portrayed through GTA IV and by engaging with the player, is performative. Brucie acts in order to be accepted as an heterosexual, by his speech and deeds performed in the game.  The online discussions about Brucie’s sexual preference is debated (4). Also if I take one small portion of dialogue from GTA IV between Niko and Brucie:

“Niko: I heard that stuff does funny stuff to your balls.

Brucie: Do I look like I got funny balls to you?

In this conversation is shown that the main character Niko, is avoiding the assumption of being interpreted as being gay. And jokes away this notion of an interest in Brucie’s genitalia.This because of the social power relations which contrive those two men as gangsters, and gangsters are not gay. 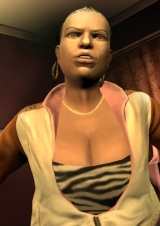 This leads me to the second example from GTA IV, that being the drug dealer Elizabeta Torres. This lady is like the male gangsters  being  portrayed as a though person. Her body physique is large, and from the introduction on the player can notice that this lady is able to defend herself. Through her looks and performance the player can deduct that Elizabeta has male characteristics, perhaps because she engages in this male dominated gangster world. On the Lesbian Gamer blog an topic rose about Elizabeta’s sexual preference: “GTA Lesbian?“(7.) I wouldn’t go as far as to guessing the sexual preference of game characters, on the other hand I could very well understand why a person would deduct this notion from a character like Elizabeta.

This brings me to my final suject, that being the character of Bernie Crane or as his original name is Florian Cravic. Bernie Crane is a homosexual, he has a boyfriend who is in politics and Niko needs to get Brucie out of extortion plans. Bernie is set up in the story line to be a ruthless war criminal, although in playing GTA IV the player quickly realizes that Bernie has transformed and now lives a different live. Bernie is a victim in GTA IV, not strong enough to take matters into his own hands, he needs care. Perhaps this is what makes him feminine, the need of a strong man to rescue him. Bernie’s performance is that of a gay man. He tries to date Niko, and his looks are important to him. Bernie lives up to the expectations of being gay.

Overall GTA IV shows that certain gender performances really are performances, and that the social constructions of power contribute to these notions. By conforming to the gender or the sex, one becomes that gender or sex. So much for Grand Theft Auto IV, much interesting is to see how the franchise continues with an add-on for the videogame titled; ” The Ballad of Gay Tony.” Here we directly see the use of the homosexuality of a character.