On this very memorable Saturday afternoon the Red Bull drinking special Doc Lab guest and master storyteller Ira Glass, and the British wine-sipping documentary, clip, and fiction filmmaker Julien Temple were present at the Escape Club to talk about their work and to share their insights of film making and storytelling. 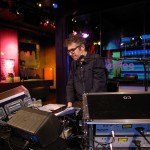 Ira Glass, the principal guest of this Doc Lab program with the title Live Stories, is famous for his award winning documentary show This American Life. The show contains a radio, a podcast and a television version and attracts no less than 1.8 million listeners a week in America. Besides, the show has been the inspiration for a dozen feature films. This afternoon in a sold out Escape Club Ira Glass was, straight from the plane, sitting behind a desk filled with equipment and a Red Bull at hand, ready to reveal the audience the secrets of his success.

Glass immediately started with his most important rule about successful storytelling without images: you have to amuse yourself when doing your work. Radio is entertainment, it just has to be fun and you have to make sure that your audience is not able to turn off the radio after the first minute. This American Life is broadcasting stories that are nowhere else can be found and depart from a different perspective than usual. They avoid the official ‘journalistic perspective’ with the unemotional objective seriousness and they rather look for the surprise, the unexpected and do not hesitate to include the human reaction of the reporters. Glass wants the reporters to exploit every feeling they can exploit: amazement, surprise, critique, and by this they “describe this world that is smaller than the real world”. The reporters talk like a person, not like the broadcast journalists. “And this is why opinion is kicking ass of journalism” says Glass, “because it has a human voice. Journalism is stuck in the 50s and 60s and really needs to shape up!” Glass and his team want to be surprised and are in search for “look how different this is than you think”. The show is about narrative stories, they follow people around, no big issues, just normal people. They use journalistic tools for normal stories that are plot and character driven. He warns his European colleagues, where there seems to be a bias against narration: “But! European brothers and sisters, narration is awesome!” Storytelling is all about structure, while at the same time your subject has to live the story while they tell it and make sure you fill the show with plenty surprising moments.

Meanwhile, Glass is exactly doing this right now, he is telling us, the audience, the story of his success: he fluently switches from live telling, radio fragments, and musical inserts. I think we have been witnessing live radio making at the spot by Ira Glass himself! 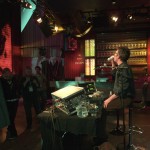 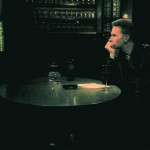 The second guest speaker of this afternoon was a very different sort storyteller, Julien Temple, who is famous for films like The Great Rock ‘n Roll Swindle, The Filth and the Fury, and Glastonbury. After being welcomed by an overwhelmingly loud and funny screening of Sid Vicious’s I Did it My Way, Julian did it his way. His poison was not the Red Bull, but red wine which might be considered as typical for the sort of narrations he constructs which are build out of different media forms like animations, hand held camera work, texts, and lost & found VHS footage.
Hans Maarten van den Brink, the director of the Media Fund who organized this first annual Idfa Media Fund Lecture, wished Julien good luck, who responded with the question “do I need Luck? Yes, it turned out he did, as his talk was a slightly chaotic, intuitive, and unstructured but inspiring travel through his work and his ideas about film making.

Temple kicked of with: “I am the media mixmaster” and “yes, you can put this on my tumbstone” to continue with his rule “not to stick in the past and always work with the stuff that is given you” he adds that it is not about where we came from but where we are going. Temple’s work is build on music, it is his biggest inspiration and he feels that music frees you, everyone can have their own response to music and he tries to use it to provoke thought. He feels that his music documentaries are not about music (“I hate this when they call it rockumentaries”) but he just uses music as a window on the world, to raise questions, which is what cinema should do, or try to do. Trying to evoke people to think for themselves instead of being told what to think. Film making should be as a discovery about what you want to say, “if you already know what to say, it sucks, find the film when you make the film”. You should only then make a film when nothing else matters, when you are obsessed with it.

Temple works often withe found footage, by accident recorded on tv, surrounding others programs, or, in the case of the film Glastonbury (2006), he invited the audience to send in tapes about the festival over the last 35 years: user generated content avant la lettre on VHS. For Temple it is great to work with free material recorded for other purposes, it gives the change to create a weird kind of alchemy, an invisible third thing in Eistenstein’s tradition. This is the future, he argues, it should be all for free!

After a question from the audience about his work on The Clash, Temple suddenly decided to show a clip with his deceased friend Joe from the film Joe Strummer: The Future is Unwritten. This sudden turn struck him, he hesitated and was overwhelmed by emotions, lights were dimmed and tissues were handed over. Another clip was played, and Temple regained his spirit closing off with a funny anecdote about Janet and Michael Jackson in their early days. Temple concluded with the remark “I’ve had a funny old life” and this way the mix master ended his roller coaster lecture, chaotic but rather fascinating.