Small is Beautiful: a discussion with AAAARG architect Sean Dockray

One of my favorite websites is the semi-obscure digital library known as AAAARG (don’t even try googling. You just get pirate-themed sites). The site is a sundry collection of critical documents – many of them highly treasured theoretical classics, others obscure anarchic tomes and legal texts – presented in a simple, sleek alphabetized index of .pdfs.

The idea from the beginning was that AAAARG’s collection would grow organically, since anyone can upload a text to the site. But what takes this beyond basic p2p sharing is the way the index relates to the site’s other peer features: first, a discussion page mostly featuring book requests and text uploads, and second, a page of user-made issues that cluster books around a general theme. So not only the text index, but also the classifications that organize them grow collaboratively.

Even more interesting about all this is the high quality of useful content. Which also makes it fragile (just read on).

I asked Sean Dockray, one of AAAARG’s architects and the founder of the first Public School, in LA, to have an informal, online chat with me about his project.

Sean:
Good morning/evening. Took that photo about ten minutes ago. 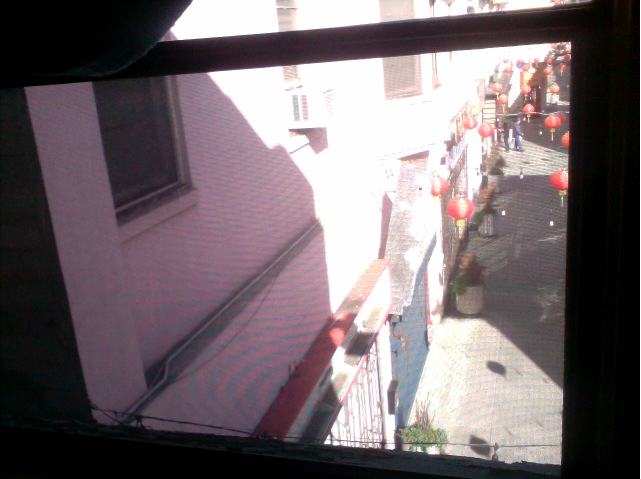 Sean:
You got it! Do you know about The Public School (TPS)? We’re having a screening on Sunday at our space. We have a rear projection screen that pulls down over the window so we can sit outside. http://la.thepublicschool.org/class/1518

So it must be warm in LA…meanwhile it’s snowing here. Yes, I found out about Public School while trying to track you down. Is there a connection between AAAARG and the Public School?

The archive part (AAAARG) sometimes generates live events (classes) at TPS,
and just as often people make collections on AAAARG to use as syllabus for Public School classes. AAAARG existed more or less in its current form five years ago. TPS just started about 2 years ago. So definitely not a connection originally…they grew into this relationship, but I think they also came out of the same place, so it’s not totally arbitrary that they’d end up in this way.

What’s your role with AAAARG?

I don’t do very much, just tighten the loose bolts and grease some gears every so often. I don’t approve anything or moderate or anything. I’m probably more like a groundskeeper. I like the self-organizing, empty aspect of AAAARG; that it is something that functions without much of my intervention.

How did AAAARG begin? Is its current state what it was originally intended it to be?

It was pretty simple at the beginning – sharing things with people who I was working with or in contact with. The community originally was tiny.

The ways that people have since figured out how to use it are very personal to them, or are communal, forming relationship with others through the site. I like that people pass it on like it’s a gift.

But as for an understanding of where it would go, I had no idea it would become so big and active in the way it is now. I didn’t expect 20,000 people to participate. Its growth has been exponential since early summer: 80% of what’s there has been contributed in the last six months or so.

Do you know what spurned the bump in activity?

I do have a theory about the bump. First, I set the site up very early to have an email called YESTERDAY so that all the texts shared and discussions started in the previous day would be mailed out.

I wrote an email one day that said this:
“Are you looking for a specific out-of-print or otherwise difficult-to-find text?
Respond to this email by June 21 with your request…AAAARG will then compile all of the requests into one batch, send it out to the mailing list and – hopefully – some one of the 3300+ subscribers will be able to find it for you. (no promises)”

And I don’t know how many requests came in, but it was in the hundreds. So I compiled a bunch of them into an email and sent it out. It was only hours before they were being fulfilled. From there, some people began using “discussions” as a way of making individual requests, with many people fulfilling requests that others make. And in the next 4 months the list went from 3300 people to 12000 people.

It’s become a really popular academic resource at this point. Given all the activity, I’m curious about its sustainability.

I don’t think it’s sustainable, but file sharing is resilient. That part is sustainable if what’s meant is something that will weather bad economies, legal threats, changes in technology, etc. AAAARG probably won’t. But I don’t think it matters; it’s not trying to be the new library. That said, I don’t think it will disappear, I don’t think anything ever does. The word promiscuity for the digital object I think is a really good one.

(Map of AAAARG’s index over a year ago, found via Open Reflections)

So what specifically is threatening the site? Is it legal problem or economic?

Verso posted a cease and desist letter yesterday, one legal threat. But mainly the problem has been economic/technological. It has no institutional support. No one has given it money. People offer to contribute money, but I always say no, which in a way supports the emphasis on sharing and distribution and exchange of knowledge.

I think AAAARG is going to be something quite different soon, especially if the cost goes up to $200/month, or if a flood of cease and desist letters come in. The other cease and desist letter was from OMA, Koolhaas. Two letters in five years, is really remarkable I think. I mean I totally understand why there’s been so little protest: as someone who has written a couple things for magazines or in book chapters, I want people to read them!

I think pdf readers are going to be another real problem because they will demonstrate that pdfs are a market, a useful copy of the real thing. (parenthetically, I love when people upload highly personalized scans. I much prefer these to fresh ebooks). As ebook readers demonstrate a market, then sites like AAAARG become intolerable because they sit right in the middle of that market and maybe demonstrate how that market is built through the production of scarcity and highly controlled supply. But like I said it never goes away. People have been scanning and sharing books for a long time.

And what now that you’ve received the Verso letter?

My response was “Of course we’ll comply. Cease and desist letters are no joke, especially when backed by 3 million per year in sales.” I’m in the camp that it’s not only about copyright, so I’m not going to refuse to budge. It’s about sharing and exchange of knowledge, so if someone asks that I take it down, I will. But I wish it were the author who would ask. I prefer to think more about the desires of authors and readers. Publishers have other stakes.

AAAARG can be analyzed both from a copyright angle – who else is getting away with sharing copyrighted material on the web? and from a peer exchange perspective, the network that grew around it. But it’s the way these issues are related that could be interesting to analyze more…

There’s obviously nothing natural about property, copyright, restrictions placed on distribution, etc. The kind of sharing that people find themselves wanting to engage in, if it becomes normalized, can suggest possibilities for other ways of thinking about these things (which don’t always rely on cease and desist letters, defensive postures, and territoriality).

That’s why I’m also more enthusiastic about taking a positive approach to all of this – its not about fighting copyright or standing up to publishers or something, because at the root of it all, I hope we’re all on the same side, which is to say that we’re interested in the dissemination of ideas, in the possibilities for them to change the way people think and to help imagine a better world, and so on. We look for opportunities to together develop theories and ways of understanding the really complicated situation that we’re in.

Several authors have written in support. A lot of authors aren’t exactly happy by the artificial scarcity imposed by academic publishing, and it’s not like they see a whole lot of money from it either.

Do you have any intention for AAAARG that hasn’t yet been realized? It’s interesting to speculate what it could become, if it could grow unfettered.

What do you think?

Well, it seems conversations could grow around texts, and that would create another archive of discussions, and maybe people would want to exchange videos, audio, etc.

You know there used to be a lot more discussion about texts. It used to be harder to post new things. That was made easier, and then there was less discussion! In an interview with Julian Myers on the SFMOMA blog I said that I felt that the act of sharing itself constituted a kind of conversation. Focusing too much on the comments leads to a reductive idea of conversation, although I have visited sites with great comments.

The issues section instead becomes a kind of conversation, because people add texts into other people’s issues. Also it is a way to articulate your own argument through selection, omission, etc. The “shared issues” are less predicated on “here is my collection” and more on “I wish there was this collection, but I don’t know what would go in it”. That moves it to something before the presentation/ exhibition/ publication stage — to the earlier, discursive stage.

Which the archive has the potential now to conflate, as Wikipedia does with each article’s editing history pages. You have both an potentially mutable object and a record of its process.

It’s there that knowledge is produced in relation to lots of other people and texts, through conversation; then it often gets flattened and crystallized into singular authorship by the time it is pushed into a “public” form.

The Unix philosophy is not something I think a lot about, but I thought of it with respect to discussion. From Wikipedia: “small is beautiful” and “make each program do one thing well”. I’m not keen on the authority of how these statements are written, but I guess it goes back to what I was saying about being ok with AAAARG losing some of its discussion as the sharing became easier. Don’t mistake it for my philosophy, but I do think that small things put into relation with one another are interesting.

Oh, and you’d asked “what future do you foresee for AAAARG?” more a’s! ha.