Natural disasters always have threatened man’s existence. However, as the report ‘New Technologies in Emergencies and Conflicts’ by the United Nations cites; “the number of humanitarian crises has been rising in recent years. Moreover, disasters strike more frequently, and with the most devastating impact, in the least developed countries.”[1] Of course, this claim seems somewhat subjective; it either proves the nearing completion of Revelations, the last book of the bible, or points to the increased worldwide coverage of disasters in our contemporary society. This last explanation seems to be the better one; we simply notice all disasters because we experience them through technology. However, do we really experience them? Are we still grasped by misery on, for instance, television? Or have we grown numb; ‘yet another disaster…’

Traditional broadcast models, as we have known them for some time now, do not enable interactivity. Centralized transmission and private reception used to be standard. Recently we have been partly set free from this traditional model by technological developments introducing Web 2.0, user participation, wisdom of crowds, etc. This may sound fairly technological deterministic, of course this is a process of interaction between the technology itself developing and subjects both shaped by and demanding new technology. As Terry Flew puts it; “societies and cultures become so immersed in modes of being and behaving that are shaped by their wider technological forms through which we extend our capacities and senses that our very ways of being human are inherently linked to the technological forms through which we extend our capacities and senses.” [2]

Our capacities and senses have been extended in such a way that the world has become a global village, ever shrinking in size. Experiencing specific events around the world is possible, including disastrous ones. Now, back to the question of being grasped by a disaster; information visualization could be the key. Otto Neurath writes the following; “present some worthwhile information, show up some relationship in a striking manner, to arouse interest, direct the attention and present a visual argument which stimulates the onlooker to active participation.”[3] Engelhardt and Nino Zambrano also argue for information visualization in the same sense: “Its messages can be immediate and powerful, without sacrificing the level of detail necessary to represent the complex subject accurately”[4]

In the above quotes, Neurath and Engelhardt/Nino Zambrano are writing about static information graphics. When the element of interactivity is added (as enabled by the Internet) to enhance visual arguments, the stimulation may only grow stronger; “the user plays an active role in raising his awareness about the topics at hand”[5]

Meier and Leaning further specify this raising awareness through visualization in what they call the ‘big world’ and ‘small world’ context.[6] The big world represents a Western society with a governmental, institutional perspective; the small world represents local community perspective, which is affected on a local level by a disaster or crisis. Small world then affects Big World though information technology. This parallel is then used to point out that the two can connect through interactive visualization and crisis mapping. Interactive technologies can allow societies to bridge the gap between Big World and Small World, through visualization of data. Small world then benefits from the effects visualizations and mapping generate in Big World:“The potential impact on […] humanitarian response is significant.”[7] Small World is simply enabled to reach out through concrete visualization of a problem, gaining followers in Big World.

An example from interactive visualization leading to response is the Google Outreach Appalachian Mountaintop Removal map, raising awareness for the changing of American landscape due to coal mining (for now only viewable from the air) and increased chances for erosion and disasters like mud streams or terrain shifts. 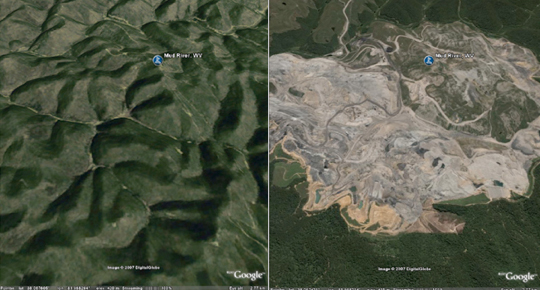 “Google Earth has transformed how we think about the issue, because it not only allows millions of people around the world to see and explore the impact on our region, but it also allows people right here in Appalachia to see for themselves what is going on in the mountains above their homes and communities.”[8]

Visualizations like these can contribute significantly for lifting a crisis/disaster to a higher scale, from Small World into entering Big World, where the awareness of a problem can grow, improving chances for humanitarian response, groups of people stepping up and/or political/governmental action.

Interactive visualizations like this can even be extended by, for instance, showing how individuals are connected to the level of coal mining. A layer could be designed that shows how every individual could deploy alternate energy sources or save energy to substitute coal and what affect this would have on the removal of the mountains over time.

The awareness of the mountain removal case coined a website (http://ilovemountains.org), which has made it to a massive new audience. Even American celebrities and politicians joined the save the mountains campaign; “Leonardo DiCaprio, Robert F. Kennedy, Jr., Woody Harrelson, Sheryl Crow, Kathy Mattea, Congressman Frank Pallone, and Michael Moore. One of the most important successes of the site has been our ability to attract and engage an ever-growing network of individuals who are becoming active, long-term partners in our work. Over 25,000 people have signed up on the site and joined our network of supporters, and that number is increasing every day. […] Publicly launching our project in Google Earth and participating in Google’s Global Awareness program has elevated the profile of the mountaintop removal issue astronomically”[9]

Google Outreach proves itself a very powerful platform. Interactive information visualization like Google Outreach could be the seed to a growing awareness of disasters/crises or more general events demanding attention, educating the public about phenomena otherwise unknown. Neurath also signalized this same movement; “visual education is related to the extension of intellectual democracy within single communities and within mankind.”[10]