As I’m reading Vanity Fair online this morning I realize that I have two separate articles pulled up next to each other on my browser that are essentially telling the same story only with different characters.  Yes, it happens but in this instance it’s Sean Parker vs. Joaquin Phoenix.  Both Parker and Phoenix have new films being released (or already released as is the case with Phoenix’s I’m Still Here 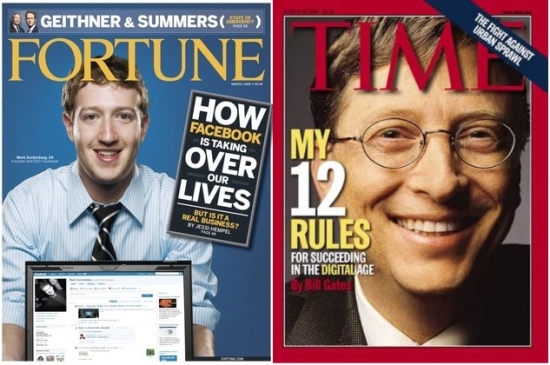 ) telling the story of how they got from A to B in their respective industries but, in short, these articles are just promotional fodder.

However one covers an “internet rock star” and the other an Oscar nominated actor.  For those of you who don’t know, Sean Parker’s resume includes co-founder of Napster and former president of Facebook (until he was busted with cocaine and fired) and according to Vanity Fair he is “tech’s bad boy.”  The article goes on to paint a picture of Parker that reflects a cerebral genius, with an eye-rolling amount of money who wrestles with his own intelligence and reputation, etc., etc. (insert the trailer for Phoenix’s movie here but maybe replace genius and intelligence with hip hop artist).

What I find so bizarre about this article is that A. it’s in Vanity Fair and B. it begs the question of whether or not tech stars can ever achieve the same celebrity status as movie stars and rock stars.  Yes, I cover the hard-hitting issues.  Anyway, Parker seems to possess all of the dysfunctional traits that make up a Paris or Lindsay but yet we don’t see pictures of him driving his Tesla all over San Fran splashed on the cover of your favorite tabloid.  In fact I can’t help but think that this interview would have ever taken place ever if it weren’t for the Facebook movie (The Social Network) coming out next month.

Why is this?  From a cultural perspective, Parker has not only influenced but also introduced real change into our societal ecosystem in a very short amount of time.  Napster and Facebook aren’t necessarily meaningful in their own right (we would not all die if Facebook ceased to exist, at least not immediately) but they’re insurmountably more important than who Jennifer Aniston is dating.  Yet it’s hard for me to take these web influencers, like Parker, seriously as mainstream celebrities.  Tech bad boy?  Give me a break.  Maybe if Joaquin Phoenix were playing Parker instead of Justin Timberlake (anyone remember Alpha Dog?  Yikes…) in the film then we could talk.

I do plan to see both films and I’m quite curious how The Social Network will resonate with the mainstream audience that it’s being marketed to.  Maybe this is the turning point for tech stars.  Maybe paparazzi will be waiting outside of Guy Kawasaki’s door when he goes to his mailbox in the morning or following Pete Cashmore through the grocery store, although it seems unlikely.  Or maybe my barometer for gauging celebrities is skewed towards the Brad Pitts of the world and away from Silicon Valley and I only acknowledge fame through unwanted exploitation and red carpets.  In which case, disregard everything I’ve just said – I’ll just wait for the media to tell me who’s important.