As described in the introduction, the challenge of this book is thinking critically about media practices in a setting where they are fast, fun and ubiquitous. It’s written with an avowedly engaged and political approach to thought, critical theory of any sort encounters challenges. Jodi Dean attempts to analyze and intervene in the present but it nonetheless adopts a backward gaze.

Then Dean mentions that while writing the book, newer events can surpass the theory she is writing about, and books aren’t a good medium through which to present a critical media theory, but even though she wrote a book about it.

Another thing she mentions a lot is ‘the decline of symbolic efficiency’, an important concept for theorizing communicative capitalism.  Its a concept by Zizek and he means by it ‘the collapse of the big other’, the fact that there is no authority who is in charge on the internet. “If the efficiency of a symbol designates its mobility, its ability to transmit significance not simply from one person to another but from one setting to another, the decline of  symbolic efficiency points to an immobility or failure of transmission.” ((idem, pag. 5))

Blogs provides a clear example of this, with a blog post, it’s not clear when it is ironic, funny, sincere or serious. One who reads the blog can be insulted from it even when the writer didn’t meant to do that.

Jodi Dean is professor of political science at Hobart an William Smith Colleges. She focus on the contemporary space or possibility of politics. Dean is a blogger herself and in her book she makes some points clear by giving examples of her own blog experiences. 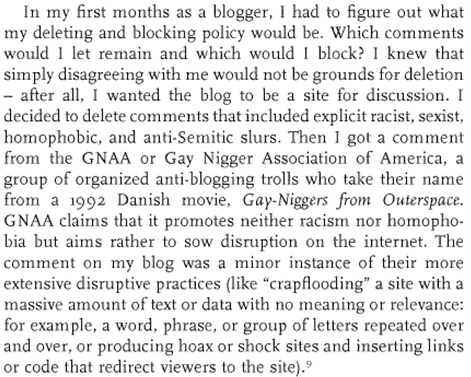 (A phrase from the book, found on book.google.com)

In her book she explores the way in which new media practices like blogging and social networks capture their users in networks she calls networks of enjoyment, production and surveillance. Like Sean Cubitt mentions, in her book Deans answers the question: ‘what happens to politics when there is no one in charge?’ Her answer to that is communicative capitalism. According to Cubitt ‘the obligation to communicate in a new world turned into a market for communications.’ He thinks the book is a radical call for a new media politics.

Dean first shapes the economic, political and social impacts of blogging. To my opinion you have to know something about new media terms to fully understand this book. After that she talks more about blogging and the question if blogging is death nowadays.

On one hand it is, because there are many other networks, like social networks facebook and twitter, where you can update what you are doing at the moment. There is also a new kind of blogging, corporate blogging. Hired bloggers blog about a product to advertise, to bring attention to the product, hoping for many reactions.

On the other hand it isn’t, blog isn’t dead, it is living aside social network sites etc. The essence of the social network site is how many friends you have, blog is about the content, the information. There are still coming up more and more blog’s so is blogging really dead?

She ends her book with affective network. According to Dean:

“Affective networks capture users in circuits of drive. The more we contribute, the more extensive our submission. More bluntly put, as we share our opinions and upload our videos, there are more opinions to read and videos to watch and then more responses to craft and elements to mash up. And then there are still more responses to read, and as these increase so do the challenges of finding the ones we want…The result looks like a power law distribution, new voices are disadvantaged, those without language, media, and visual skills remain lost in the flow.” ((Idem, pag. 124))

I found it very hard to going through this book. There were parts I enjoyed reading, this were the parts about the blogging, her own experiences with blogging and how blogging is or isn’t dead. The more theoretical parts about politics, a lot of new media related terms and opinions of critics like Zizek, Danah Boyd, Susan Buck-Morss and Jaques Lacan were interesting in so far I understood it.

There are communicative exchanges on the internet every day. This can be through blog posts, social network status updates and text messages. It has great effects which undermine capacities for democracy and entrap us in circuits of domination. If you find this interesting, you really should read this book.