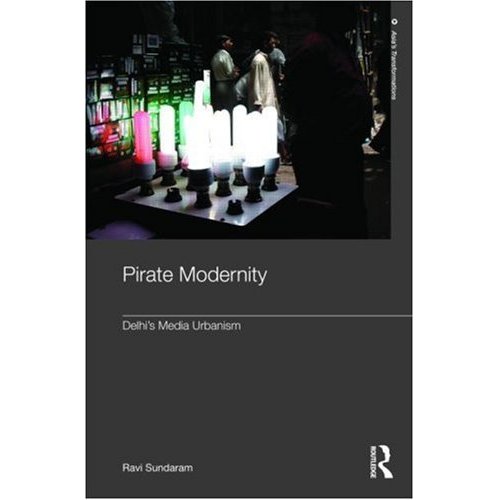 In Pirate Modernity: Delhi’s Media Urbanism, Ravi Sundaram clearly explains the way the new media have affected post colonial Delhi’s urban landscape from the 50’s onwards. Sundaram is one of the initiators of Sarai, an online platform dedicated to address media issues in South Asia. He focuses particularly on globalism and modernity in India and puts new media at the center if this. He has written multiple articles on technology, media and urban experience and their effect on each other and is also one of the editors of the Sarai Reader series. In 1996 Sundaram gave an interview on the ‘Brazilianation of India’ where many elements also treated in Pirate Modernity are discussed.

Pirate Modernity starts with a broad description of Delhi’s urban development where the pan-optic idea over the years slowly changes into a more decentralized pirate modernity to a commodity culture eventually. Where the Masterplan, based on the US model or city organization firstly introduced zoning and a centralized management, it soon becomes clear that the effect does not have the desirable outcomes imagined by the state and the elite. Instead, pirate culture becomes increasingly big amongst the urban villagers which make (technocratic) management from above almost impossible and make civic liberalism an increasingly important definition. In the 70’s, Delhi had become a ‘megacity’ with ever growing opportunities in piracy for the masses all set in the context of social unrest. This eventually led to a crisis in the 90’s where technology seemed to have backfired on society. Not the villages and slums were the reason for congestion but rather the fast development of technology and technological machines backfired on society.

As a novice in the field of Asian media culture, this book certainly provides an interesting kickoff. Although explanations are somewhat lengthy and complicated at times, you certainly finish the book with a clear and surprising view of contemporary Delhi. Using original examples and metaphors to describe the changing urban setting of Delhi, he manages to put the idea of piracy and its sociological and political implications in a new perspective. Using road accidents as an allegory for the contemporary urban life it becomes clear to the reader how citizens are torn up between the desire for new commodities and the fear for its deadly effects. Additionally, he managed to dig into the ‘underground’ scene and highlights some positive effects of piracy in society. A relief after the often elitist perspectives towards copyright, though I find it disappointing that he does not offer any possible solution to the problems this has inflicted on society. As a reader, you are still left with questions considering Delhi’s future.

All in all, the book draws a clear picture of how contemporary Delhi was affected by the Internet and technology in general. Countries like India are growing rapidly and fill in an increasingly important role in world economy and politics. Pirate Modernity is especially interesting for those interested in urban planning, piracy and politics and will provide a great starting point from where to explore further into the field of new media in the developing world.