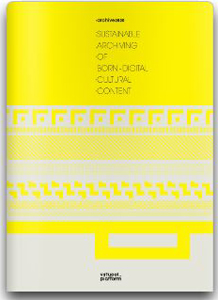 Author and publisher: Annet Dekker through Virtueel Platform: May 2010

In a time where contemporary art is struggling to exist as a part of history and its cultural heritage, the transition into a digital era from an analogous epoch is a fact. Archives no longer serve its simple purpose and task of storing specific artefacts and documents. The digitalised upgrade to archiving is greater than one might expect. Greater masses of material see potential of becoming recorded and stored through the worldwide web sphere. We see oral history through audio and visual becoming crucial as well as perhaps the social historical value behind the development of online gaming. Unfortunately the masses of material and information being produced digitally online is facing a decline in preservation, as the material grows, yet the understanding of how to archive such matters is not following the same rapid pace.

Following the report of the archive 2020 conference Virtueel Platform published a compilation featuring a series of group discussions and interviews in which the threatened nature of born-digital culture is debated. Various individuals within specialist fields evolving the born- digital preservation and archiving present their ideas and concerns on the future of our digital cultural heritage. Critical aspects of how the archiving should be pursued as well as its visibility and access to the public population. With the problem of a great deal art work existing online, its suggested that its shared or exhibit not frequently enough to be considered as valuable for archiving. This proves problematic as such art work documentation through means of imagery, text and video is of essential value for this present era.

Deciding what specific material should be documented is not the only concern, another problem that arises is that of using the right software or program in order to access the art work. Artists and other cultural institutions are encouraged to understand the available software’s in order to “extend the shelf life of their own work” (p 28), suggesting the creators to also take matters in their own hands. The book also introduces the usage of other means of documenting digital heritage, such as online gaming, which is argued as the core of the new generations’ subcultures. It is the concept of how online gaming has reshaped us as social beings, which suggest that the historical development of games and gaming should be considered and documented.

Following the development of a digital era, audio recordings and their ability to be rapidly and globally distributed, make oral history appealing and an option. An alternative to the non oral material preserved in today s archives. Using orally recorded history would enable a greater spectrum of ideas regarding media arts and events, from both the artist and perhaps even its audience. The key focus of this book is nonetheless on the restrictions that exist on the documentation of contemporary media art and its heritage, with the discussions leading towards possibilities for improvements within the knowledge of the digital domain amongst the producers of art and their institutions. Virtueel Platform presented a book that brings forth the complexity evolving the preservation and sustainability of the existing media art as well as that of which is to come. The matters discussed could be suggested as carrying crucial significance to most people whom in today’s digital era, probably find themselves also contributing to the media archive with digitally-cultural content.

Compiled and edited by: Annet Dekker