Starting from its very title (“The digital humanist”), all in this book is clearly rooted into a hybrid philosophy, a way of looking at things from an interdisciplinary point of view. The context is that of Digital Humanities or Humanities Computing, a study/research field where the impact of digital technology on traditional humanities’ disciplines is analyzed along with the parallel contributions of those very same disciplines to the recent history of computing; consequentely, the authors come from different but convergent backgrounds [philosophy of science, new media, linguistic and computer science], the topics they investigate are mutually interrelated and their ambitious goal is not only to find profitable synergies between the digital realm and the cultural one, but to finally define/describe the emerging dimension of digital culture. 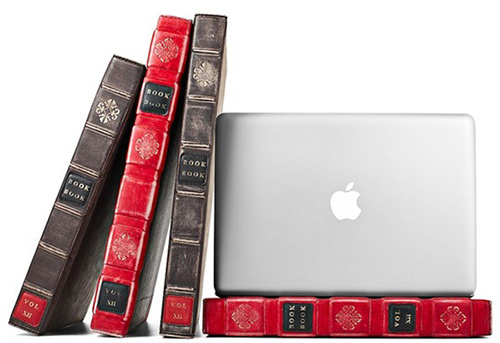 The first chapter is some sort of unusual but essential introduction to the “humanistic roots” of computer science: in a deep but agile flashback, a whole set of visionary ideas (from human-machine interaction research to philosophical conjectures about data organization and networking) is revisited & represented as the key feature to the future developement of IT. The nodal “epistemological turn” lies precisely there: if throughout the years the computer was able to evolve form a mere number-crunching engine to a powerful communication tool, that’s because of the fruitful liason between pure hardware improvements and a conceptual literate substratum shared by developers and technicians [a similar approach can be found in “The New Media Reader” by Wardrip-Fruin and Montfort, where the evolution of digital devices is retraced via scientific, artistic, design planning and narrative texts].

But what happens when, a good 40 years after the first experiments on interconnected terminals and mechanized files’ libraries, the (printed) “Knowledge” becomes inexorably digital and explodes in scattered/shared fragments all around the web? The average reaction, not only among conservative academic scholars, could be of disappointed non involvement, incapability or even panic; it’s instead the case of dealing with the transformation as soon as possible – expecially because it’s radical, quick and intrinsically changeable. Therefore, starting from the assumption that digitizing data is just one side of the coin (the other being to create digital documents from scratch), the authors present an interesting digital trivium of practices and tools to be analyzed: in order to better understand our [textual] 2.0 times, we better focus on both “writing & producing content”, “representation & preservation”, “searching & organizing”. We may discover then that a file’s life is not so easy as it seems: it requires metadata to be readable on various platforms and refreshing strategies to migrate from one support to another; at the same time, it has to be properly archived in order to be easily retrievable, and clear or attractive to meet specific queries; moreover, it may contain hyperlinks or multimedia inserts to convey more information on the same page – or simply to meet the demands of new sophisticated readers; in a few words, it has to be(come) a digital object. 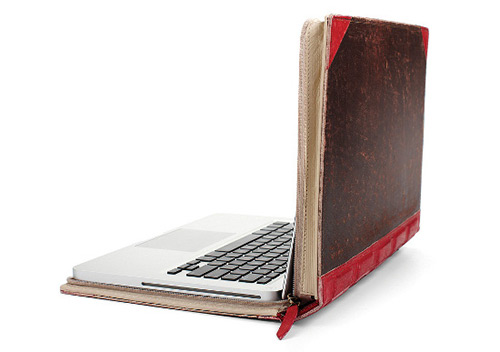 In this impetus of consciously embracing technology before technocracy colonizes or annihilates the humanist heritage, “L’umanista digitale” is already one step beyond: part of a textbooks’ series explicitly meant for students and researchers, it has indeed a rich web prolongation with extra chapters, tutorials, outlines and interactive exercises (as with a DVD, a lot of challenging and supplementary material gravitate around the core, ready to be used in parallel). To access the digital appendix you remove a seal on the dust-jacket and get a personal code, then browse the publisher “aulaweb” [read: “classroomweb”] and select the volume; very basic interface, but effective –> here’s a snapshot overview. 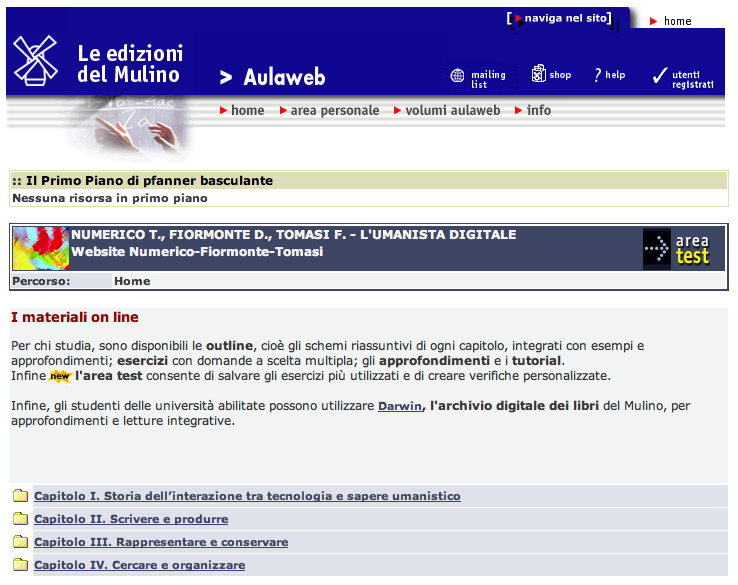 This (iper)book purses an olistic endeavour, theoretically as well as practically: bridging paper and webpages, litterae and bits to retroactively demonstrate that they’ve always been intersected. A perfect read for those intellectuals scared by numbers but fascinated by numerical rapresentation of data and its consequences (plenty of them nowadays); also suitable for apocalyptics and integrated, in order to soften their everlasting dispute on mass media & cultural industry by reflecting on surprising new forms of creativity and circulation.

P.S. = while searching alternative reviews I stumbled upon this english presentation written by one of the authors; they’re searching for translators and contributors..