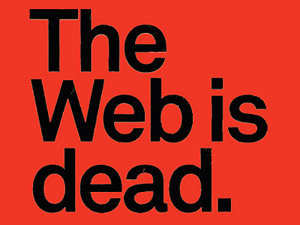 Chris Anderson headlined his latest feature in Wired magazine: The Web is Dead, Long Live the Internet. He maintains that with the ubiquitous iPhone comes app addiction; so while most of us spend the whole day on the internet (using applications like Spotify and Google Maps) we’re no longer browsing the web as much as we used to. The browser is THEN and the app is NOW. Apps, as Anderson also points out, is not the terrain of HTML or Google.

In Africa the opposite is true. iPhone penetration is negligible – this is Nokia and Samsung territory. According to Admob metrics, Africa accounts for less than 1% of the global iPhone OS unique device distribution. Africa has also long since been the place for USSD and SMS above downloadable applications. While, as Anderson points out, many users are taking the internet from their desktop to their mobile many Africans’ first and only experience of the internet is on their mobile phones. PC-based internet penetration is under 10% in places like South Africa.

Increased app usage might be driven partly by American and European commercial interest gathering around this next digital frontier. With CPM rates in the doldrums and unlikely to recover at least apps promise better revenue.

Or perhaps it is more useful (in an effort to understand the differences between these audiences) to focus on the African context and the needs and demands of Africans on mobile technology. A Nigerian will no doubt be more interested in a mobile job search site than Spotify. Google Maps might lose out to a mobile site reconnecting refugees in Uganda. M-Pesa (cell phone banking) is Kenya’s big mobile success story. South Africa’s largest mobile portal VodafoneLive hosts a wildly successful and highly trafficked HIV question-and-answer mobile site called Young Africa Live.

Or maybe it’s Google we should focus on to understand what’s next for this distinctly mobile-friendly continent. Google Trader (a Ugandan based service that allows people to buy and sell goods and services on their phones using SMS) launched last year November (although still in Beta). They’ve long since been interested in creating a bigger presence in Africa. As far back as 2004 Sergey Brin commented on Africa at TED saying, “This is something we should really work on.” ,

While Google’s play is not clear, one thing is certain, the web death and app nirvana Anderson describes in this feature is a distinctly western notion.