Facebook, as a tool to connect, communicate, share, link, network and socialize, has become omnipresent in the Internet landscape. Its history starts in 2004, when Mark Zuckerberg launched the network at Harvard University. It has since reached over 500 million members. The fascination with facebook is equally pervasive. A quick search at google scholar results in a staggering number of 506.000 results.

Facebook members can share thoughts, likes, dislikes, philosophies, morals, beliefs and all other forms of information that point to matters of lifestyle. They can do so through status updates, profile settings and other personalized applications. The degree of willingness to publicize oneself and share (private) information with the net varies. However, regardless of how extensively it is used, it bears the curious potential to act as a medium of self-exploration, self-reflection and confession. While status updates and profile details are individual matters, they are also monitored by the virtual space; thus belonging to a bigger network – a totality. This conjures the need to examine user behavior in retrospect to power relations that shape these practices, in our case with particular attention to Foucault’s concept of pastoral power. 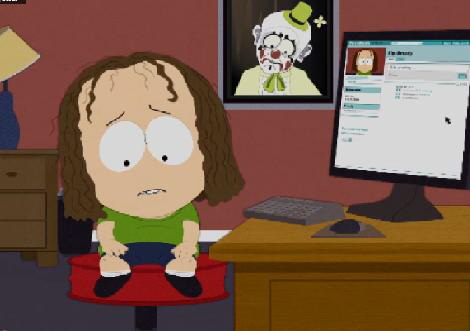 Kip Drordy in “You Have 0 Friends”- Southpark, Season 14, Episode 4

Pastoral power, a term shaped by Foucault, is in its traditional form salvation oriented, oblative and individualizing. While in this original sense, seeking salvation referred to the afterlife, in modern societies this idea has changed to ensuring salvation in the present life in forms of health, well being, security etc. The number of people executing such power has increased and diversified to encompass state bodies, police, and other officials, as opposed to previously only pastors. (Foucault, 1982, p. 783f)  Pastoral power is an intricate concept proposing, as part of Foucault’s theories about power, surveillance and subjectification, that means of control and governance, while once institutionalized (Christianity related) forms of power, have now become internalized human practices in modern societies. (Foucault, p. 783) Suggesting that such practices are internally performed leads to the assumption that due to their decentralized nature and independence from institutions, they have become more powerful than when executed from specific bodies of conduct. Or as Roger Deacon (2002), in revisits Foucault’s theories about power, surveillance and subjectification, says,

“power relations become more effective the more they infiltrate into everyday life, as they shift from being externally imposed to being internally invoked, from being authoritarian to being participatory […]” (p.110)

In this case, the notion of power as a performance, a routine through participatory behavior stemming from an individual rather than an institution, is of particular importance. As it is in such social media as facebook, that people devote time to share thoughts about personal occurrences, news, politics, everyday – life banalities, or anything else that crosses their minds. These become most frequently visible in status updates and more subtly through applications such as the “like” button. Even websites such as lamebook and failbookhave been devoted to draw attention to some of the more ridiculous, uncommon, inappropriate and funny status messages. To which degree and under what circumstances individuals expose, confess and self-reflect in the facebook realm is unsure, but the matter of fact is that they do.

Giving importance to everyday occurrences through exploiting such to a larger mass has given facebook the curious prestige as a socially accepted authority, not in the sense of an institution but rather that of a network consisting of human power relations, formed by various means of interaction. In examining the evolution of power concepts as defined by theorists such as Jürgen Habermas and Foucault, towards modern day concepts about power relations and performance, Theo Röhle (2005) finds that instead of power as a centralized and institutionalized system, it is now

“seen to permeate society in formations of changeable and interlinked networks” and continues that these networks are “utterly intertwined with knowledge and the formation of the subject” concluding that since “subjectivity is heavily intertwined with power and knowledge, there can be no talk about an autonomous individual.” (p. 415)

The modern concept of pastoral power is of unique value, when applied to new media practices and social networking sites such as facebook. According to Deacon, in order for pastoral power to unfold, its potential knowledge about the actions of groups as well as their conscious is demanded. (p. 95) It remains unclear if, in the case of facebook (and other social media), this knowledge (as a measure of discipline) does exist as an actual body of institution or whether it is only created through facebook members that assume its existence. That is, by believing in a form of external knowledge through monitoring and a notion of being observed, do facebook members subscribe to a self-observing behavior that allows for pastoral power to manifest itself? Hence, facebook, through its potential to provide a sense of individual performance and self-evaluation while watched by an unknown group of others, allows a peculiar form of almost passive pastoral power, pointing at the paradox about pastoral power, described by Foucault. According to him, pastoral power simultaneously develops techniques to individualize and totalize. (p.783) While placing value on the individual and its finding the truth within oneself, it underlines the individual’s importance for the collective, the group. (Deacon, p.94) Foucault explains that

“the multiplication of the aims and agents of pastoral power focused the development of knowledge of man around two roles: one, globalizing and quantitative, concerning the population; the other, analytical, concerning the individual.” (p.784)

Facebook and the ability of its members to act as individuals within a collective serves this double-role as a simultaneously global yet self-involved form of virtual representation and communication.

To which extent online performances are a matter of executing power, self-reflection, and even self-governance remains a primary study focus when looking at facebook. Deacon explains that the means by which people govern both themselves as well as others happens through procedures of identity-construction and knowledge production (89ff), concluding about modern societies that,

“via techniques of confession and ascetic conduct, faith and empiricism, and self-reflection and everyday reality, western political rationalities, in the form of combined totalization and individualization technologies whereby some (struggle to) discipline others even as all (are exhorted to) discipline themselves, have come to dominate the globe.” (p. 89)

In the context of social media research, this claim needs thorough examination.