Wikipedia: An exercise in patience

Before getting started with creating a Wikipedia entry I went through all of the tutorials, read the comments, watched the youtube videos, scratched my head and said “pff this can’t be that hard.”  So I decided to dive in and immediately realized why said tutorials exist.

Me vs. Wikipedia, Round 1

Originally I started writing about LA based record label and event company, IHEARTCOMIX.  After spending a good hour or so looking for credible sources to please the almighty edit bots I was starting to get a bit frustrated.  IHEARTCOMIX is a really great company and they do a lot of stuff with a lot of equally cool artists BUT they’re not mainstream.  Sure they get blog love but blog love is childsplay according to Wikipedia.  So having spent forever combing the internet and trying to piece together a worthy article I decided that I would have to give up and switch topics.  There was no way that the measly “article” I had pieced together was going to cut it.  However before throwing the draft into the proverbial trash can I decided to publish it just to see what would happen.   Much to my surprise it wasn’t immediately deleted.  Sure I got some snarky comments about my sources (don’t really have any) and the way it was written (too promotional) but it hasn’t gotten the axe just yet.

Me vs. Wikipedia, Round 2

As the IHEARTCOMIX train was derailed I started reading about the labels founder, Franki Chan (DJ, entrepreneur, comic book lover extraordinaire) and saw that he was represented by The Windish Agency (TWA).  This got my wheels spinning again.  After a quick search on Wikipedia I saw that TWA was not listed so I set about developing my entry.  TWA is a large booking agency in the U.S. who basically represents all of your favorite indie bands ever.  I was actually a bit surprised that they didn’t have a Wiki page already…that’s where I come in.  TWA made it quite easy for me as they have links to press about the company embedded on the site.  So after reading through the articles I pulled together a Wikipedia page for TWA that I’m happy to report is still standing and with no snarky comments from the edit bots. 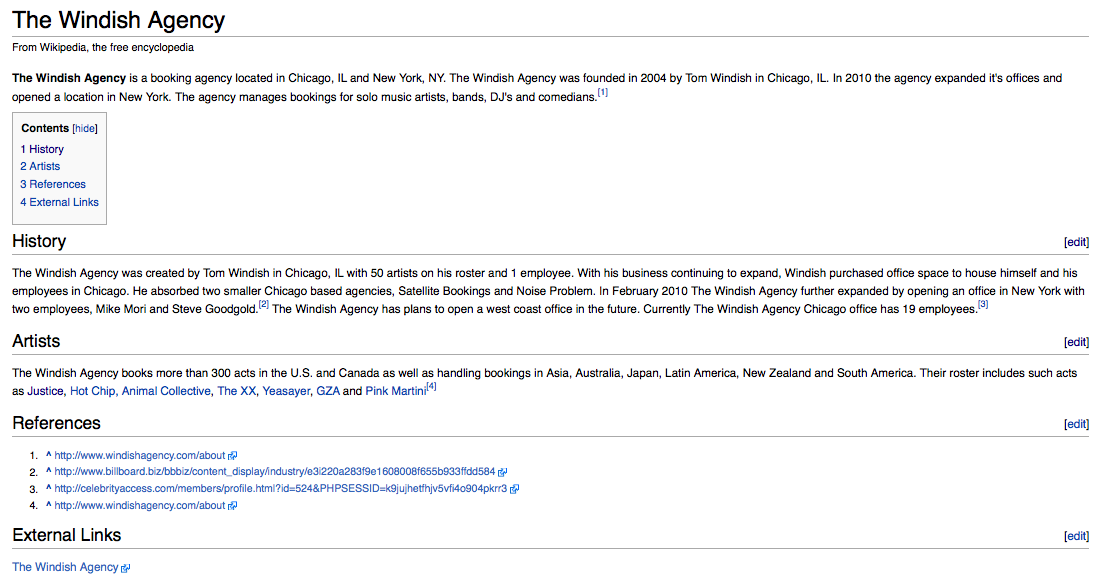 My general takeaway in developing a Wikipedia page is two-fold.  On the one hand I appreciate the standards for the contributed content.  It provides greater validity for the site and tries to assert integrity in an otherwise chaotic medium.  However in the case with IHEARTCOMIX, it’s a legitimate, established company but it hasn’t gotten the attention of INSERT POPULAR PUBLICATION HERE and therefore doesn’t meet Wikipedia’s standards.  This hardly seems like a fair litmus test in evaluating conent.  My second takeaway is that it’s too technical.  I couldn’t believe how many times I had to reference the aforementioned tutorials to figure out a.  how to start writing an article, b. add sources and c. publish the thing!  For a site that depends on user added content, it really shouldn’t be that difficult.  Or is it just me?

Update: IHEARTCOMIX is still standing.  Still not sure why.  The Windish Agency on the other hand is being challenged by none other than “Daemonic Kangaroo.”  Screen shot is below.  But they give you an option to save yourself and justify your posting which I have accepted.  We’ll see how this plays out.

Tags: editing, iheartcomix, mainstream, the windish agency, wikipedia
One Response to “Wikipedia: An exercise in patience”
Leave a Reply
This blog is protected by Dave's Spam Karma 2: 2705362 Spams eaten and counting...