The Diegetic Desktop in a New Media Film: “Skydiver AKA Instructional Video #4 – Preparation for Mission by Eugene Kotlyarenko”

A couple of weeks ago, during my routine deletion of facebook notices and invitations (“fpam”?), I fortunately bothered to open one headlined, “The Groundbreaking Last Movie from Eugene Kotlyarenko.” Okay, I thought, a movie-release by an acquaintance is special enough to warrant more than a cursory look, so although I’m in Amsterdam, quite far away from Los Angeles or New York (where most of the events I’m still invited to take place), it wouldn’t hurt to be in the know. Fortunately (again), it turned out that the movie was being released not as a full-length feature, but in ten easy-to-digest-in-our-attention-deficit-internet-culture episodes online — perfectly matching my spacetime needs.

The event page linked to jstchillin.org, the website for a curatorial project entitled Serial Chillers in Paradise, who are, in their own words:

A revolving exhibition of two week solo sites with accompanying essays by Caitlin Denny & Parker Ito. Each artist will take over jstchillin.org for two weeks with all new work that pertains to the interests of chillin. The end of the show, Serial Chillers In Paradise, will culminate in a physical exhibition including all participants in a flow of energy on a groundless site.

So during the past two weeks, filmmaker Eugene Kotlyarenko has been posting consecutive parts of his movie, with the tenth (and eleventh bonus) installment of the series just having been posted earlier today.

Tentatively (and deliberately cryptically) titled, “Instructional Video #4: Preparation for Mission – Eugene Kotlyarenko,” the movie at quick glance resembles the millions of self-made how-to videos littering the internet, with its webcam and screen-capture aesthetic, and its vague perfunctory title likely to get lost amongst search engine results. (Note: Googling the full title returns it as the top results). In fact, the movie was shot entirely “in-computer,” namely, utilizing only a built-in webcam and screen capturing software (save for a brief segment in the final installment which was shot on a phone camera — but that still counts as authentic in my books!)

However, a typical internet instructional video it is not, and despite its recursive use of new mediums, the movie retains traditional filmic and narrative elements that place it equally within the fields of both film and new media histories. Kotlyarenko’s use of voice-over, placing of visual cues, cuts on action, and even product placements venture into the cool LED glow of new media territory: the narration is recorded in the same (built-in, laptop) microphone as everything else, keeping it in the same register; screen-captures which inadvertently reveal details like the dates the captures were taken, provide a timeline of the movie’s creation; the 180-degree rule is rendered obsolete with the 2-way, webcam picture-in-picture view — Ozu would be rolling (180 degrees) in his grave with delight; cuts are often punctuated by lag-time glitches, which has the effect of a sort of digital, bit-crunched, psychedelic Murchian blink; and “product placements” for OkCupid and Pellegrino water are simultaneously tongue-in-cheek and made relevant to the plot progression.

Without giving too much away, I will try to summarize the basic plot structure: the protagonist is maintaining (physically) long-distance relationships through (virtually close-distance) webcam communication. Whatever little doubts he had harbored about the American government are catalyzed by his most meaningful romantic hopes being dashed and his coincidental introduction to the sermons of an Islamist cleric. The protagonist must now decide whether to sacrifice his real-world existence in martyrdom for a promised peaceful eternity, or continue living with unreconciled hopes in his real-world virtual life. 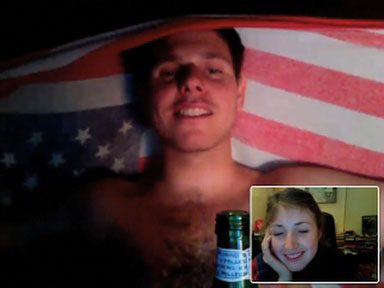 I would go so far as to say that the “in-computer” style might be the 21st century counterpart to the in-camera editing back in the old film days — both involve the movie being made within a single device, and both reflect particular economies of means. In-camera film making/editing required careful planning of every shot before the film started rolling — this related to the limits of space and physical material available, while at the same time being an exercise in working within boundaries.

“In-computer” movie making/editing also requires careful planning, but related to the limits of time. When it becomes too easy to obtain all the footage you ever need, the infinite time factor works against you. In fact, this movie is 114 minutes in its entirety, although it doesn’t seem like it when watched in pieces. It also seems that some of the material had been collected over many months, over various webcam conversations. Some were obviously scripted towards the ends of the film’s narrative, while other parts seem they were edited in because they fit so well into the story. At times, the webcammers on the other side seem to be getting “punked,” falling for Kotlyarenko’s elaborate plan, validating him by responding to him while he speaks to them in the guise of his mediated self.

The “in-computer” experience is enhanced by the situation of the spectator: as of yet, its primary distribution is via the webpage. This webpage is effectively a theater, a “place” where you “go” to absorb the atmosphere before diving into the full-screen immersion of attention. At this particular theater, the virtual proscenium arch is flanked by approvals from the fictional Islamist cleric, Wanar Ibn Ali; the top of the arch contains an animated .gif of an eternal sunrise/sunset, and below the frame of the screen are two more, of twin animated bald eagles each waving an American flag.

At times, watching the video on my laptop on full-screen, it was easy to forget where the boundary between my computer desktop and the movie’s desktop was. This adds an extra dimension of association with the character: the familiarity of the computer desktop simultaneously obscures and abets identification with the protagonist’s diegetic desktop.

As the final episodes were posted today, including the epilogue containing the end titles and credits, the official title of the film was revealed: “Skydiver AKA Instructional Video #4: Preparation for Mission – Eugene Kotlyarenko.”

A new installment everyday for ten days – till the end of time.
Check in at Midnight, Pentagon Time!

“…for ten days – till the end of time” references the tensions of shelf-life and the eternity of the internet, both vertically and horizontally, i.e., the multiplicity of time at any given moment. Kotlyarenko then signs off with what could be the gravestone inscription for his own death, or the death of his character. Ironically, this death could signify the birth of his immortal character, now that it exists as an internet entity.

UPDATE: the entry didn’t survive wikiality for very long, and has been taken down. Any contributors please feel free to help resurrect the wiki entry.