And the winner is…

This week I took my fist shaky steps on the Wikipedia. I was supposed to because of this week’s assignment, but I wasn’t quite enthusiastic. Wikipedia barbarian as I was, I thought it would be quite easy to create and edit pages. I was thus a little bit laconic about it. Before this week, I never understood people who created and edited pages on Wikipedia. Why would one share his knowledge with the whole world, without getting any recognition? And above that: why would one create a text under the circumstance that someone else can change it easily? Not my piece of cake.

First of all, it wasn’t easy at all to create a Wikipedia page. For instance, I had to think of a subject. That wasn’t hard. In last week’s assignment I tried to link the term post advertising to a Wikipedia page and I then already discovered there wasn’t any. So I took my change and created one. I thought making it easy for myself to enter the Dutch Wikipedia, with 643.347 entries much smaller that the English version of the website (3.432.142 entries). I created the entry under my user account, because then I would have the chance to edit it a bit longer before the Wikipedia editors and the bots would discover and had the chance to destroy it. But after two minutes I already got a message from ‘the Wikipedia’. The page was about to be deleted. Why? There was not given any explanation. After our teacher John and I stared at the screen for a minute, the message disappeared magically and I was able to follow the yellow brick road again.

Soon I discovered there wasn’t much to tell about post advertising, it is just an other word for content marketing, made up by a large advertising company. I ended up with a Wikipedia page not much larger than ten sentences. But I posted it anyway. Only ten minutes after, I already got the message that it was soon to be removed. This time I got an explanation. The page was removed because the term post advertising was also the name of a commercial website (postadvertising.com). So although I wrote an objective posting, and never mentioned the name of the company who made up the term, the Wikipedia-people or –bots discovered the link to the commercial website of the company.

I actually understood the reasons of Wikipedia to delete my post advertising post and didn’t have the illusion that I could win the game. So I adjusted to the rules and tried something else. In the mean time, I had become a bit of a fanatic Wikipedia user. Although I still don’t like writing stuff that someone else can edit, I like games. And I started to experience Wikipedia as a game.  So I decided I was ready to enter the English Wikipedia. 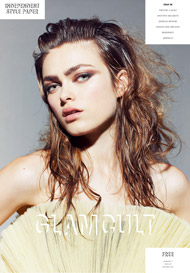 This time I tried claiming my spot on Wikipedia with Dutch magazine Glamcult. It was founded in 2003 by friends of mine and I thought that they deserve to be on Wikipedia. So I wrote a few lines and placed it. Already in a few hours I got the message that my post was soon to be deleted, because Glamcult is a non-notable magazine. I couldn’t of course  let someone say that about my friend’s hard work, so I started a discussion with Wikipedia. I told them that a magazine that has exclusive interviews with Mario Testino and Victor & Rolf is not a non-notable magazine. And that Glamcult is seen as one of the leading magazines on style and is very popular. I deleted the message of Wikipedia.

That was yesterday. It is still there.
I won!