Wikipedia is the mother of my entry

Searching the definition of  ‘community’ on Wikipedia (yes it is ironic) I found the most common one of ‘ a group of interacting people living in a common location. The word is often used to refer to a group that is organized around common values and is attributed with social cohesion within a shared geographical location, generally in social units larger than a household’.  Reading this description it would be easy to say that the Wikipedia-community lacks some essentials characteristics: does it have a common location or shared geographical location? But my first steps into the Wikipedia world has taught me one thing: the Wikipedia-community is complexer than you can imagine. 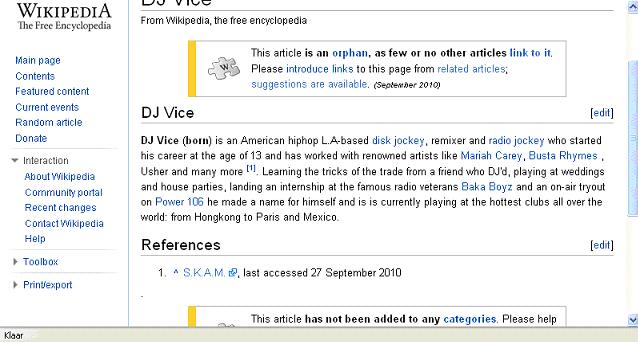 Like everyone contributing to Wikipedia for the first time struggles with a subject to write an entry about,  because there is already a vast amount of entries and it seems like everything has been covered, most certainly if you choose to contribute to the English site.  So if you are not a fan of some Danish underground rockgroup or an expert on exodiffusion it gets hard to find a subject, but Wikipedia solves this problem by offering a extensive lists of requested articles and subjects by members. Because I have never been to Denmark and I know nothing about natural sciences I used the ‘requested articles’-page and quite randomly picked to write about an American hiphop DJ called DJ Vice. And guess what?

To my surprise the entry is still up and running. I was surprised because writing a Wikipedia entry is as easy as it sounds, it is not about finding some information on the web about some DJ and making a coherent story out of it. It’s about finding good references, links to external websites, links to Wikipedia-sites, a certain lay-out and also the tone of the entry are all aspects you have to bear in mind. I have experienced the strict rules that Wikipedia has: a few days after my entry it was appointed as a an ‘orphan’ by another member of Wikipedia: a page that lacks articles both to external sites as within Wikipedia but with that comment came some suggestions for articles that I could link to. With appointing my article as an orphan it is almost like the community as a mother was willing to accept it as one of it own, all it needed were a few alterations. But even adding links was under a lot of scrutiny by the network because my links to some websties about DJ Vice where removed by a bot who considered it as spam. Although I knew Wikipedia was run by a large community it was only through active contribution that I came to understand the power of it.

These first steps into Wikipedia’ community made me see that we are dealing with a complex but highly efficient network, a network that has one goal: delivering as much quality as possible but also confirmed my ideas about Wikipedia. In the ongoing debate about whether to trust the information on it and always comparing it to traditional encyclopedias: we should consider WIkipedia as a starting-point. Whether it is for doing rsearch for a paper or just finding some information about a subject consider WIkipedia as your tourguide. All articles are highly linked, both to external as to internal sites, that can help you dig deeper into your subject.

Tags: community, DJ Vice, wikipedia
One Response to “Wikipedia is the mother of my entry”
Leave a Reply
This blog is protected by Dave's Spam Karma 2: 2705362 Spams eaten and counting...