Recently, while surfing Masters of Media Blog, I found a  post about Twitter and its possibilities to become a Public Sphere. The ‘sphere’ I have in my mind is one that had been envisaged by Jurgen Habermas, namely

‘part of public life where ordinary people exchange information and opinions regarding potholes on Main Street and international politics’ (Rheingold, 2000:175).

I am talking about last year Ellen Sluis’s post Twitter: Public Space or Public Sphere? In her post she writes that the Internet gives enormous possibilities for many people to share their own thought and feelings. People write, produce and express more than in the times of centralized, one way flow, with little interaction media. The Internet would be the new public sphere for people to participate and engage democratically. Ellen points Twitter out to exemplify how brief messages can  be instantaneously share by people all over the world.

I totally agree, with the author of the post, that the Internet, with Twitter as an example, is not an ideal Public Sphere yet. However, with features like: efficiency, capacity, interactivity and freedom from time-space constrains (Poster, 1998);  user friendliness, cheapness, reduction of the problem of selectivity and bias (Tambni, 1999), this new medium is very close to the quintessence of democracy. There are of course counter arguments for that, however this is not the issue I would like to take up in this post.

Amongst many for and against internet as a public sphere Paparachisi (2002) comes up with very important characteristic, I would like to focus on here. Namely, the potential of the internet to bring people from diverse backgrounds together, which is highly visible in web 2.0, twitter in particular. This issue is also realized by Tambini (1999), who states that internet provides devices, that link together individuals or groups with the most obscure common interests. And Twitter is a great example of all those above mentioned positive as well as negative characteristics of the web.

There is no doubt that the internet is in favor to little known individuals and groups to reach out citizens directly. Using interactive and non-edited media and the powerful search engines of the internet , individuals with the most obscure common interests can find one another and communicate.  Tambini gives as an example neo-Nazi groups, an extreme right activists who gained transnational importance , what would otherwise be impossible in traditional media due to huge expenses and illegality.

As we can read in a article ‘Nazis get onto Twitter, but they’re not being blocked’, more and more extreme activists use Twitter to address and reach more and more people. All those extreme activists follow the newest technology and media and have started to use Twitter as an another (new) channel of communication and promotion of their detrimental values. Nazism, Fascism are issues that are very irritating for numerous countries. For example Ebay famously had to block the sale of Nazi memorabilia in Germany for this reason.

In the first half of 2010, there was an interesting debate around extreme activists micro-blogging on Twitter. Many of them, like Heil_Hitler_88 (one of many Twitter users that promote Nazis and fascist ideologies), were requested to delete their feeds for containing insulting messages. 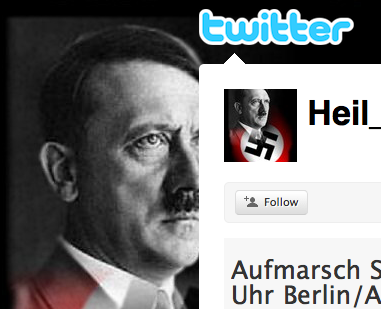 At the moment, a few months later account of @Heil_Hitler_88 does not exist. Was it blocked, removed or expired? Who knows, for us it is important that such harmful and illegal (in many countries) content survived on Twitter for so long. Even at the moment, when we type ‘Nazi’ in the Twitter we can find numerous users propagating this extreme values. But this is Internet – ‘a public sphere’ where everyone is allowed to speak and to be heard. To the certain extend obviously. This is also an issue with many racist movements, or any other believes that might hurt other individuals.

‘Could Twitter become terrorists’ newest killer app?’ similar headings could be found in 2008 important information websites. The buzz started when military report concerning new media devices (Twitter as one of them) had been revealed. According to a military intelligence report:

The report outlines three possible uses for Twitter as a terrorist tool. They are:

1. Sending and receiving messages to and from other terrorist cell members.

‘Twitter is already used by some members to post and/or support extremist ideologies and perspectives,’ the report said. ‘For example, there are multiple pro and anti Hezbollah Tweets. In addition, extremist and terrorist use of Twitter could evolve over time to reflect tactics that are already evolving in use by ‘hacktivists’ and activist for surveillance. This could theoretically be combined with targeting.’

The report noted that human rights groups, communist organizations, anarchists and others are already using the Twitter to communicate with each other and send messages to broader audiences. Either it is a probable hypothesis or just an another operation by US government we have to be aware that it can become a real danger, if  used in an ‘appropriate’ way. For sure,  for terrorists Twitter is another source of information, another way to fight with their ‘enemies’.  And that’s not everything….

As we can read in ‘naiin’ website (as a non-profit non-governmental organization,  that has been fighting all forms of cyber crime across the world)

With just a few clicks, users ale able to post links on Twitter to websites, videos and images. ‘More and more tweets with links to Internet content containing child pornography are being posted’, says naiin’s chairman,
Often, pedophile Twitter users also use the micro-blogging site to let each other know when child pornography websites are taken down or blocked. Like-minded individuals are notified by tweet of the new addresses (URLs) where they can find the sites in future. ‘Twitter is therefore also increasingly being used by child porn consumers to lessen the impact of websites being removed and blocked’, explains Dennis Grabowski. Unfortunately, this makes the micro-blogging service a useful information system for many consumers of child pornography.

One of the biggest problems of the Internet and Twitter, in particular, are facts that: the Internet is the hardest to control communication medium in human history, does not filter information, offers many-to-many communication and allows for a greater degree of reciprocity between senders and receivers of information (Olsen, 2005). This is a reason why such tweets are many times posted and reach myriads of people.

Democracy is all about being free to give your opinion. But to what extend can we be free? There are of course issues that are considered un-democratic, harmful and many times illegal. Should they be automatically blocked on platforms like Twitter?

The purpose it the post is not to critique Twitter or any other social media element, but to turn your attention to issues that many times take place, what worries me a lot. I obviously appreciate positive usage of the Twitter, I tolerate commercial purposes, but I cannot stand individuals or groups who take an advantage from such new media devices to destroy democracy. This is the conclusion to this article, which can also encourage you to elaborate more on the topic and to come up with interesting research questions and findings.