My Twitter inquiry had as a starting point the question, whether we may deploy the notion of the virtual to enhance the “real”, or that is, the actual. So I was interested in researching whether it is possible to think of Twitter’s tweets as a new force that will give rise to an interdisciplinary, synergetic, and real-time dialogue and a body of knowledge that would advocate a fresh, new tool of mediated collective intelligence (as Levy defines it, 1998). For the text’s sake, when I refer to virtual I don’t imply the several developments in VR science but I look back into the very essence of this world derived from virtus, meaning strength or power.

It is commonly argued that, information technologies and online social networks enable new ways to signal our presence. More precisely, it is asserted that, the use of Twitter may reveal the power of the text (in copying and rebroadcasting) in enabling social interactions (Boyd, Golder and Lotan, 2010). Unlike Facebook or Myspace, in Twitter the user does not hold to a more or less detailed profile that would serve as an individual’s online representation, the person’s identity and reputation. User profiles are stick to the basic, a photo, a username and a  few words in which someone will describe him/hers self, but that is all. In Twitter all what matters is your tweets and if those will inspire others and would make them willing to follow you. Moreover, what is interesting is that the text has not only moved from the paper to a screen but most of the times it has moved to a mobile screen (Lenhart and Fox, 2009).

Has the text been finally set in motion, swept up in the flow, is opening up the way for its new possibilities, for a new actualization of its virtuality?

These changes in the way we write and redistribute written text alters also the way that we interpret it. It seems that we are more concerned of what the text make us think, here and now, than we are interested in the author’s original thoughts (Levy, 1998). We encounter and value people within the context of centers of interest. These encounters are becoming in real time and are rather hasty. But this endless production and reproduction of thoughts, this public interplay of voices,  is building a database of information through interaction that is growing and is taking a life of its own.  It becomes a way to engage with others  in a universal conversation that fleets away the very moment that we try to grasp it. 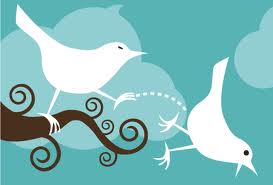 Are these new reading and writing practices, engaging online users to a new form of dialogue? Are they providing a new context within which the virtual can be intertwined with the actual and provide new possibilities?  May the actual become virtual in itself, as being that which it is not?  And my initial point is then that they both become potential when they meet.

I’m wondering if this constantly updated “dialogue” can give birth to a new form of collective intelligence, as I’m mostly wondering if it is possible to perceive, remember, learn, imagine and reason in real-time.

Twitter is many things, is occasionally poetic, it’s often informative and sometimes it’s just a very easy way to get a message through to a lot of people. It’s instrumental and transitive most of the time, as people use the tweet to pass on to something else possibly with the use of re-tweeting and all that is because, a tweet is never a dead-end.

I personally have decided to use Twitter as my online diary of interesting quotes that I find in my readings and maybe in others’ tweets. Since it seems that I cannot keep an archive or a trace of others’ tweets, as the online list is constantly updated and one tweet is overcomed by the other in a rush,  I will pursue tracking down my own tweets/ re-tweets that will finally represent all the online/offline knowledge that I’m confronted with.