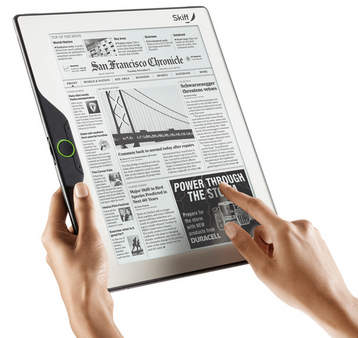 Now a days you can do anything online. You can watch television or video’s online, games, you can play them online. You even can have a conversation online through e-mail or chat programs. A ‘new’ online trend is e-publishing. Instead of taking ten books with you on your vacation, you can buy an e-reader, put a hundred books on the little machine and you doesn’t have to sweat one’s guts out carrying all the books. So books can be read in a digital version, but also articles and news papers can.

News papers, that is where I want to talk about. A few weeks ago I went to the supermarket when some young guy approached me at the entrance. I had to do a little quiz by pointing three familiar places in Amsterdam on a blind map. Since I’m born and raised in Amsterdam, of course I won the little quiz and I got a brooch of the news paper he was working for: Het Parool.

This brooch and the fact that I won was for him the motive to palm off on getting me a subscription on ‘Het Parool’ AND because I won, I had the right to chose I nice welcome gift. Well the joy of my ‘victory’ disappeared. I hate it when people want to sell something to me so I started the offensive.

When he told me I could have a subscription for ‘only!’ a year, I told the man I don’t have a paper because I don’t read papers. I don’t have time to read them because the times I can read, it is for school or else a nice book. ‘How do you keep yourself informed about the news than?’ he asked. ‘Well, when I’m in the bus, in the train or when I have a little time, I read the news online’ I said.

‘Ooh, that’s great, than you can have our online subscription, your receive the newspaper in your mail!’ he shouted out. From that point I understood the man was a good seller. I told him I have an iphone with applications like ‘nu.nl’ on which I was perfectly able to read the news and ‘phew’ he was leaving me alone.

The late 1400’s was the time when printed news appeared. News pamphlets were passed around in Germany and the first true newspaper was the London Gazette of 1666. Since the dawn of television, newspapers had to compete with news channels. These did not bring about the demise of print media, so what about online news? ((Newspapers vs. online news. Epinions.com. <http://www.epinions.com/content_3321077892>. 31 may 2003. 13 oct. 2010.))

In 1994, when news was appearing online, there was much criticism.

“Online papers pretend to be seeking and absorbing feedback [my italics], but actually offer the illusion of interactivity without the reality, the pretense of democratic discussion without yielding a drop of power. The papers seem careful about reading and responding to their e-mail, but in the same pro forma way they thank readers for writing letters. They dangle the notion that they are now really listening, but that’s mostly just a tease – the media equivalent of the politically correct pose. The real power, as always, lies not in online exchanges but in daily story conferences among a few editors who don’t read e-mail. In fact, the familiar newspaper model lurks behind every icon: You can write us as many letters as you want, in a faster way than before, and we’ll read them. But we’re still going to decide what’s important, and then we’ll tell you. And we’ll do it in a format that’s even less pleasant, portable, and convenient than the paper itself” [my bold] ” ((Katz, 1994 in: Hania Piotrowska. News Online. Does newspapers suck?. <http://newscapstone.wordpress.com/did-it-happen/11-do-newspapers-suck/>. ))

So the beginnings of online news were tough. Teletext is still used nowadays, the other medium of news before internet was videotex, which was a failure and made investors lose a lot of money. The next step then, was the World Wide Web. Web 1.0 was mostly non-participatory so you only was able to read news online and search in archives to read old news. In web 2.0 invited the readers to get involved with the online platform. The online news websites had to welcome their readers to engage in the process of creating news. This could be done by encouraging feedback by email or comment options and they could promote by sending own suggestions for news or pictures to illustrate the professional stories. ((Hania Piotrowska. News Online. Does newspapers suck?. <http://newscapstone.wordpress.com/did-it-happen/11-do-newspapers-suck/>.))

According to Hania Piotrowska the total disappearance of newspapers and magazines from the print market isn’t going to happen but one thing is for sure, to survive (either print or online) magazines and newspapers will need to adapt to the environment in the most optimal way. The ones most able to adapt will continue their struggle on the financial market, while the ones less able (or reluctant to change) will be forced to leave the game. ((Piotrowska, Idem))

What are the advantages of online news? The online newspaper has a bigger amount of storage capacity available. You can store way more news on a computer than can be printed on the pages of a newspaper. Online, you can easier find old information or an article from for example half a year ago by using the search function. The online newspaper is more actual. A printed paper appears once a day while the online newspaper can put news online directly when the news is happening. You can watch video’s sometimes even live.

A disadvantage of the online news is that you aren’t always able to check the news online since there isn’t always an internet connection available. A printed newspaper you can put in your bag and take it with you wherever you want. On the other hand, with the 3G phones you can check news at any time. Another point is that the news pieces online are often very short. For a long version you have to search through the internet for more information. Of course there is also the health aspect. A printed newspaper is more healthy to read because you don’t have to sit behind a screen. Reading from a printed newspaper is better for your eyes.

Disadvantages for the printed newspaper are:

According to mediaonderzoek.nl it doesn’t. In an article called ‘Papieren krant blijft bestaan’ (printed newspaper will keep existing) they present the outcomes of a research done by Hans Beyers on the University of Antwerp. The goal of the research was to sketch the situation on the terrain of the online newspaper. 1074 web surveys where taken.