From ambient awareness to addiction to the virtual world of tomorrow

When your social life is only one Tweet away

According to this introductory video, “Carla” the virtual example of the #newbie user, once skeptical to Twitter, now comprehends and values the effect of her online presence in the Twitter world. In this chaotic world we live in, Twitter can offer Carla (or any Carla) the chance to reconnect with people that she doesn’t have the time, the urgency, the need or even a sufficient motivation to (physically) meet. Despite that Carla can now “follow” the latest changes in the lives of her acquaintances in real time and enter a world where she can understand secret verses of her network’s lives: aspects she wasn’t aware of before or she wouldn’t even learn ( possibly ) hadn’t she registered on Twitter.

In an nutshell, Twitter users ( as Facebook users in a degree ), by following the real time newsfeed, get to know trivia about people who usually are not physically present in their lives; they follow the sequence of whatever is happening to their network, observing, retweeting, commenting. Usually, although posts on Twitter can be described as trivia and unimportant “blubbering”, followers gradually become aware of other peoples personalities, gaining a deeper understanding on themselves and the users they “follow”. This notion of ambient awareness, fully describes the vague, ambient understanding that a user gains for other users by observing e.g. the Newsfeed roll on a social networking site, including Twitter. Or as put by Steven Johnson, science author and co-founder of the local-news website outside.in[i]: “And yet as millions of devotees have discovered, Twitter turns out to have unsuspected depth. In part this is because hearing about what your friends had for breakfast is actually more interesting than it sounds. The technology writer Clive Thompson calls this “ambient awareness”: by following these quick, abbreviated status reports from members of your extended social network, you get a strangely satisfying glimpse of their daily routines. We don’t think it at all moronic to start a phone call with a friend by asking how her day is going. Twitter gives you the same information without your even having to ask.”[ii] What is also interesting is that an explosion of sociality is usually noted between “weak ties” of a user’s network: among the people that are distant connections and not family, friends, colleagues etc[iii] .

However, the critique that derives from the ambient awareness effect is divided in two parts: one is that this “parasocial activity”, according to Danah Boyd, is mere observation and just the feeling of getting connected, “it is not the same as knowing you”[iv]. Then, the constant monitoring of follower’s updates leads to a distraction of the real, offline world and an excessive connectedness. To cut a long story short:

Too connected to a “Super- Fresh Web “

Twitter- the way that it functions- assists in creating the notion of the Super Fresh Web[v]. According to John Batelle, Super Fresh Web is the online real time conversation between you, your friends, celebs, your followers. Since, I am not on Twitter ( at least with an active account ) my assumption on the articles that I found and the first hand experiences of other users, was that a hypersocial Twitter user is bombarded with too much information and feels that it is hard not to update his profile, as means of participating in this conversation. Then again, the discussion is about participating on a SNS platform not only to figure out the latest trends or what is happening to your friend’s lives but also to constrain and monitor your online identity. And before you know it, from nagging on facing unnecessary facts about your followers’ lives (What did they have for dinner?) you end up being “addicted” in this realm of micro-blogposts[vi]. Twitter’s creator Jack Dorsey once stated: “Everyone says Twitter’s completely useless, I don’t want all this information, we check in later, and they’re complete addicts.”[vii]

Meet Laurel Snyder, author, blogger, mother of two, addicted to Twitter. She realized that her excessive connection to the Twitter world became her addiction; she kept logging in to update herself on the news from her network (following 1200 users). She realized that Twitter fever was no longer fun for her when one day she could not access her account: her stress made her realize that she had to constrain herself[viii]. And it is not just Laurel Snyder, or any anonymous/eponymous user that realizes his addiction. Using Twitter search tools such as search.twitter.com or monitter, one can get a clear idea of what is really happening on the Twitter world. Personally, I found the search engines on Twitter extremely interesting and thought of conducting a little experiment: are there any users stating their addiction on social networking sites in general, on Twitter in particular? The images below are simple screenshots from my experiment: every minute 2-3 tweets on “addicted to twitter” would appear. 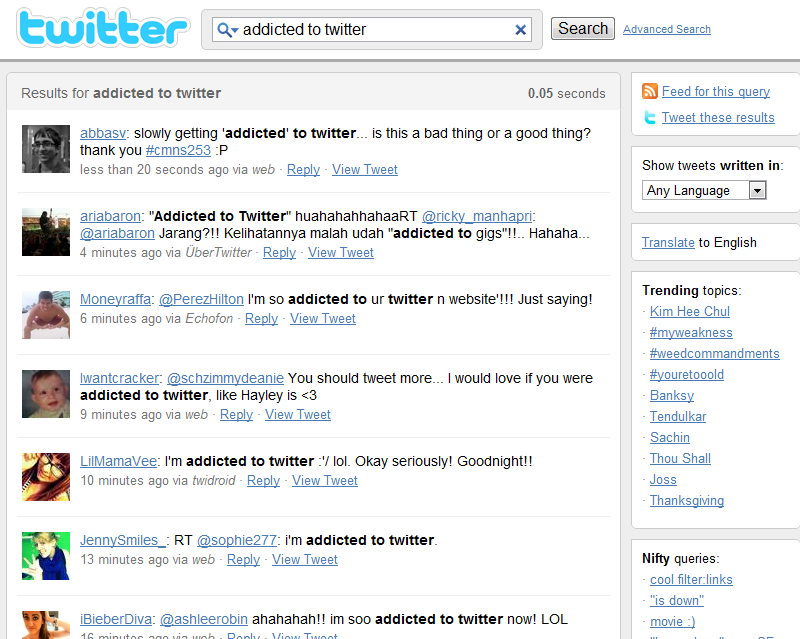 Once looking into the unimaginable depths of Twitter, one cannot help stumbling upon notions such as virtual identity, virtual community, virtual worlds. The concept of Tweet-addiction triggered some paths in my mind that lead me to the concept of psychological immersion, as described by Michael Heim[xi]. In his article “Creating the Virtual Middle ground”, Michael Heim sets to describe the users’ “active building” in virtual worlds and the fact that contemporary visual worlds “seek to engage out dwelling… these worlds invite user participation and customization”[xii]. And that exactly causes their addictive nature: in a virtual world with the effect of psychological immersion the user comes to experience different effects, as described by Sherry Turkle. More specifically, what applies to the case of Twitter is the infamous “artificial crocodile effect”[xiii] where the artificial seems more compelling than the real, leading the user to appreciate more the artificial (virtual) experience; in Twitter’s case, the user feels more open towards the mediated experience than confronting utter reality as it is, thinking constantly about the tweet-to-be instead of focusing on the sensory experience of everyday life. To better understand that one could rephrase that in Laurel Snyder’s words; in her article “Addicted to Twitter” she explicitly describes her presence in the virtual community of Twitter as such: “Only wherever I went — I took Twitter with me. I was thinking in Twitter! All afternoon, my mind percolated with 140-character thoughts that I longed to share with anyone. No, with everyone”, “It was the oddest feeling. It was as though I were actually posting these thoughts. Formatting them and sending them to all my friends, through the mysterious ether of the Internet. Only I wasn’t. It was all in my head. I was just sitting there, on a park bench, twittering to no one. And that’s when I knew I had a problem”[xiv].

Twitter then could be described as a virtual world consisting of users and tweets: a world where psychological immersion is an important element to the endless worldwide conversation taking place in real time, where “social grooming” occurs through the exchange of vital or trivial information. The matter of addiction then is transformed into the everlasting debate on virtual worlds: can real and virtual coexist, without creating serious distraction-from-reality for the user/ inhabitant of the world in question?

The evolutionary platform of Twitter is indeed the middle ground between blogging and the sms technology: it has been formed through the co-creation of different media, certainly well adjusted to the spirit of our times. Furthermore, Twitter creates a virtual world, for all the users participating in it: some of them might be excessively addicted to it, some others just appreciating the information that is served to them. The sure thing is that no one is able to foresee the future of this particular social network as no one could foresee that once created it was here to stay. I wonder, will it expand as Second Life or Facebook did?  Will it prove to be hype, a trend that will wear off? Will it expand under the orders and the needs of its users? Will it gain more “real”, actual characteristics in the near future? What is then the future of Twitter?