Twitter: how it supports a fast spread of news

Last summer we had the Carglass-Twitter-incident in the Netherlands, which was caused by three Twitter-users. Two of them posted some negative tweets about the Dutch company Carglass and used the #carglasszuigt, next to that the third user created a fake Twitter account in name of Carglass www.twitter.com/NL_Carglass. He used this account to react to the tweets sent by his friend.

In the first tweet he threatened all the Twitter users who would use #carglasszuigt with legal actions and in the second tweet he suggested that all the tweets sent with #carglasszuigt weren’t justified because Carglass is very client oriented.

All these fake tweets caused a big rel on Twitter, that day alone 1500 tweets were posted with #carglasszuigt and it was a trending topic on Twitter statistics. The people from Carglass reacted: “Of course it isn’t nice when somebody pretends to be us, especially when spoken on such a tone. On the other hand: it is still publicity”. 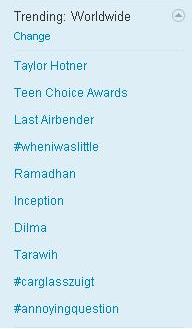 In this example we can see various things happen here. First we have a user sending tweets from an account that gives the impression to be a Carglass-twitter account. Second, we see users, as a hoax, influence(good or bad) the image of Carglass. And last, these tweets and the awareness of these tweets,  are spread  like wildfire creating a lot of visibility.

The possibility to create an online fake account is not specific for Twitter, there are many examples of fake accounts on other online applications. For instance the story of somebody who created a fake facebook account for the prince of Marocco and was sentenced to three years in jail. This creation of fake accounts is a difficult topic for the people working for these applications.

In the blog post Hey, Just a Minute (or Why Google isn’t Twitter) , Randal Stross raises the issue of the quick real-time nature conversations of Twitter and how Google should deal with this phenomenon of unfiltered information: “Do we really want Google’s search engine to swallow Twitter’s output as fast as it comes, without filtering, analyzing and ranking by authority?” The fact that this issue is raised, confirms the idea of Twitter users delivering tons of information in Tweeting and conversation in Tweets in a fast speed.

Therefore, for me the fast spread of news is the most important characteristic of Twitter.  But how is Twitter constructed to be able to create such a fast spread of Tweets?

This micro blogging tool called Twitter was created in October 2006 and  became popular since the 2007 South by Southwest (SXSW) festival, during this event the posted tweets increased from 20.000 tweets per day to 60.000 tweets. This huge increase was probably due to the fact that the people from Twitter marketed the application very cleverly that day and the application won the prize for best blog.

Twitter is called a micro blogging tool because it resembles blogging in many ways, you can post your text to the web and share it with your friends. Where you can use as much text as needed in a blog, Twitter limits the user by restrict the amount of text in a Tweet to 140 characters. These Tweets are displayed on the users profile page, just as a regular blog, and are  publicly visible by default. As a user you can follow other people and see what they Tweet and they can follow you and your Tweets, this is called following and followers.

In the work Why we Twitter: Understanding Microblogging Usage and Communities, by akshay Java and others, they confirm that microblogging tools are constructed in a way that support easy sharing status messages. They compared microblogging with regular blogging and present two important differences  “By encouraging shorter posts, it lowers users’ requirement of time and thought investment for content generation.” Next to that they found a difference in frequency of updating. “The second important difference is the frequency of update. On average, a prolific bloger may update her blog once every
few days; on the other hand a microblogger may post several updates in a single day.”

In the work TweetTweetRetweet: Conversational aspects of Retweeting on Twitter by Danah Boyd eo, the conversational aspect of Twitter is analyzed. In her work she mentions three ways of communicating on Twitter. First we have the use of the @ syntax in a tweet. Here a user can refer to others and direct a tweet to this other by adding @ and the name of the user. Next to that Boyd mentions the hash tag(#) which users place in there Tweet before a specific topic. This is what was used in the Car glass incident, that is #Carglasszuigt. This way user can classify their tweet and it makes it easier for users to search tweets with a specified topic. “The practice of using keywords to label tweets most likely parallels the use of “tags” to freely categorize web content.” She suggests in her work that the practice of using hash tags in a tweet origins from the history of computer programming where the hash tag is used to identify anchor points in HTML.

Boyd directs her research to the Retweeting aspect of Twitter.  She describes the retweeting as: “retweeting is the Twitter-equivalent of email forwarding where users post messages originally posted by others. This convention has no uniform grammar, although ‘RT @user msg’ is one common form.  She mentioned that it is difficult to analyze the trail of retweets because users often change the content of the tweets they retweet.

We can conclude that Twitter is constructed in a way that supports the fast spread of Tweets. As mentioned in the work Why we Twitter: Understanding Microblogging Usage and Communities, the requirements are low and make it easy to share in a fast tempo. Which results in a higher updating rates compared to regular blogging. We can assume that the rise of smartphones and the possibility to update directly from your mobile phone, will make tweeting even easier for a user.

The conversational construction of Twitter is also an aspect which facilitates fast spreading of information. We can direct a message by using the @, or categorize it by using # and the name of a specified category. Next to that we can forward tweets by using RT in a post and retweet them.

So, Twitter makes it easy to share information fast and easily. This explains why it was easy for the people behind the Carglass hoax to create such a buzz. Twitter is constructed in a way that makes it possible to do this. But not all tweets become trending topics and are probably not meant to create a buzz. In the Carglass incident we can imagine that the content of the tweets appealed to a lot of people which made them use the #Carglasszuigt or retweet the tweets. For me this raises other questions, for instance: What tweets can create a buzz on Twitter and become a trending topic? Which tweets are retweeded? To bring this all back to the Carglass incident and the fact that Tweets can influence a brand of company, does Twitter facilitate power to the people?