Electronic Paper to the Rescue!

The last couple of years there has been said a lot about the future of books and magazines. The overall conviction is that the old method of printed paper will be replaced by new methods. Digital publishing will change centuries of ink printed publishing. This change will not only bring many new features to reading, but will also be important in light of our growing environmental conscience by reducing energy costs and felling of trees. However many people are still skeptical to the idea of digital publishing, and remain loyal to the ‘old’ book mostly because they don’t like reading off a computer screen. 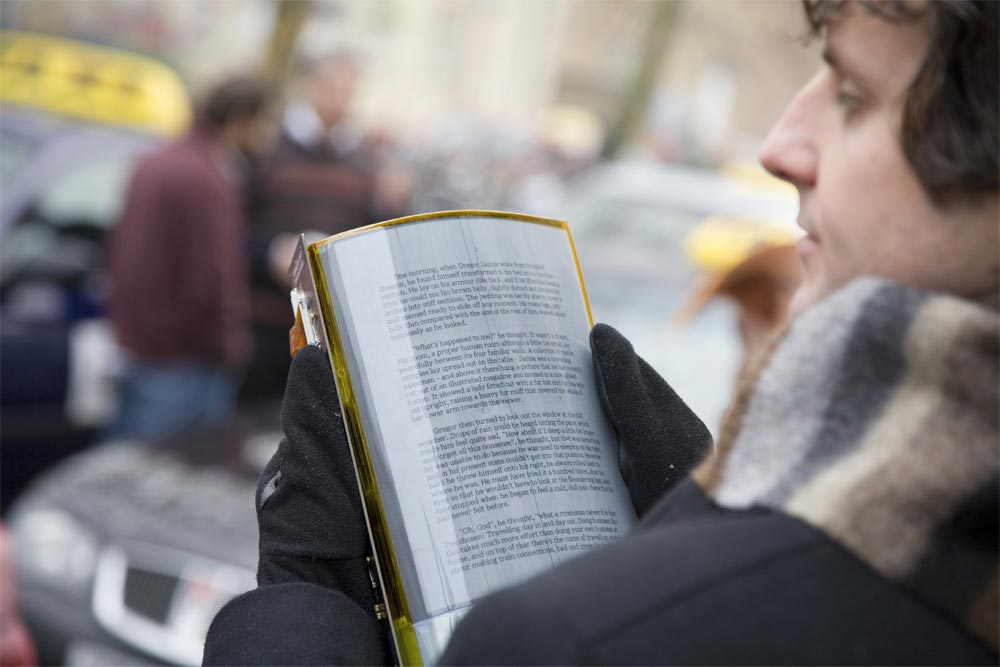 Jay Shah and Malcolm Brown Jr. researched the possibilities of electronic paper, a display technology that mimics the appearance of ink on paper. According to them paper has properties that make it better for reading than computer screens. “(a) high reflectivity and contrast, (b) flexibility, (c) light weight and ease of portability, (d) low cost and (e) wide viewing angles. In contrast, computer screens suffer from disadvantages such as: (a) low reflectivity, (b) high emissivity, (c) high cost, (d) high power consumption and (e) bulkiness. Also, the screens are hard on the eyes and prolonged use is difficult.”.

Contemporary electronic readers have tried to cope with this problem of reading off screens by being relatively cheap, small and light weight devices, but most important, by introducing electronic paper. Its inventor Nicholas Sheridon realized that despite the advent of computer screens in our offices and homes, much of the reading was still done off regular paper instead of off the screen. “Any document over a half page in length was likely to be printed, subsequently read, and discarded within a day. There was a need for a paper-like electronic display — e-paper”.

The technique Sheridon invented was called Gyricon, however other forms of e-ink, with improved properties compared to the original Gyricon, have been developed over the years. One of these is the electrophoretic display. According to its makers “The principal components of electronic ink are millions of tiny microcapsules, about the diameter of a human hair. In one incarnation, each microcapsule contains positively charged white particles and negatively charged black particles suspended in a clear fluid. When a negative electric field is applied, the white particles move to the top of the microcapsule where they become visible to the user. This makes the surface appear white at that spot. At the same time, an opposite electric field pulls the black particles to the bottom of the microcapsules where they are hidden. By reversing this process, the black particles appear at the top of the capsule, which now makes the surface appear dark at that spot.”(E Ink Corporation).

Last year Apple introduced their iPad, which would revolutionize the way we read our books and magazines. The tablet, unlike the electronic readers, is able to show everything that is digitally published in full color. Thanks to high refresh rates, interacting with the content goes very smoothly and video display is possible. Its applications would do away for instance with newspapers, like this video shows;

According to Informa Telecoms & Media the sales of e-readers will reach its peak in 2013, and after that will decline. This decline will be caused by the shift away from dedicated e-readers like the Kindle, to the more multifunctional tablets like Apple’s iPad. “In its current incarnation, the e-reader offers a good reading experience, high levels of portability and great battery life. However, it is under threat from the availability of electronic book (e-book) content on multifunctional devices such as mobile phones, tablet computers, netbooks and other portable consumer electronic devices,” said Gavin Byrne, senior analyst at Informa.

The end of printing is near?

I can see how these multifunctional possibilities are very appealing to the users, and agree that the dedicated e-readers lack this ability and therefore are threatened by them, however these devices have one important shortage; the problem of reading off a screen. The multifunctional devices don’t have the feature of electronic paper, and therefore I would argue that many people will not convert to these devices. Like Shah and Brown Jr. said, traditional screens like the LCD screen of the iPad are hard on the eyes, prolonged use is difficult and they lack the flexibility of paper.

So what should the future of digital publishing look like? The convergence of the multifunctional devices like tablets with electronic readers that have great readability, together with the property of flexibility would for me be the end of ink printed publishing. Luckily, as the video below shows, manufactures today are working hard to create full color electronic paper that is flexible and will be able to display video. When in a couple of years this technology is fully matured, we can say goodbye to our books, newspapers and magazines.