E-readers, will they substitute educators and librarians?

The heavy task of lugging stacks of books might be seeing the end of its era, for with the expanding digitalisation of textual content, EBook readers and Edocuments ( PDF files, Word Doc, podcasts etc.) are introducing a more flexible and subtle way of enjoying your reading. These different forms of digitalisation all fall under the scope of the hardware device Ereaders, in which the textual content becomes accessible through a tablet. Designed with a small electrophoretic display, the reader is very light and commonly provides navigation directly on the display as well as a lower set of keys. The memory capacity of these machines varies, yet commonly rather large whether it’s external or internal, as they are initially set up to store a great deal of documents. Some of the leading distributors of the Ereaders are Sony, Apple, Nook (Barnes & Noble) as well as Amazon Kindle. They generally provide similar features, yet varying in design and software platforms. Although there is still growing criticism towards the manufacturers and the lack of certain standardised formats required for the documents to be read. The Ereaders are suggested as a more compact platform alternative for reading and viewing certain content. 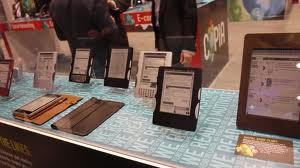 These devices allow individuals the option of compiling their own literature library on one piece of hardware. The difference with reading texts on these electronic readers, compared to on a laptop is the screen option, on a laptop the viewer is exposed to a specific backlight that can be tiring for the eyes. As opposed to the readers which are designed using electronic paper, which doesn’t irritate the users’ eyes as well as the practical and simple function of turning the pages. These types of products have the potential of aiding a certain institutions more than other, such as that of education.

Students whom are subjected to heavy amounts of readings could find it rewarding as it allows them to access a great deal of material from one place, but it’s also an affordable investment for your average recreational reader. The idea of incorporating this into education has been debated since the early stages of the Ereaders development. In a study by Saurabh Gupta and Charlene Gullet-Scaggs Would students benefit from using Ebooks and Ereaders in Academic programs (2010), they investigate the possibilities of integrating Ereaders with academic studies. As a result from this knowledge enhancement integration study they discovered that some machines do not have direct access to internet, which is naturally required to download the documents, whilst there was still a shortage in the selection of textbooks available. Some of the readers allowed sharing of books between devices (specifically between the same brand) which was a positive outcome, as well as its simple design. The ability to make notes next to the text is also available on certain tablets, yet there was still great deal of criticism directed towards the personalization function, as the study showed people were not able to manipulate and adjust the texts they were viewing to suit their needs. So they concluded their study suggesting critical improvements towards the collaborational and personalization functions of the readers.

In a similar a similar article by Chantal Gorissen at the Open Universiteit Nederland called;Towards an educational model of eReaders in education (2009), she discusses general aspects such as the introduction price being too high, as well as some of the practical issues that might arise, such as having to deal with books that have been accidently deleted from the device, would one be able to retrieve it or download it again free of cost? considering it had already been purchased once before from the eBook store. She raises some interesting points pertaining to the traditional ways of dealing with books, such as lending and sharing texts. Other aspects of which I would like to highlight is her take on the possible integration of such devices into educational institutions.

As mentioned earlier there is naturally the positive option for students to carry all their literature in one device, as well as the prices of electronical books being cheaper. The aspect of pedagogical teaching becomes essential as, education goes beyond reading masses of texts, it includes social interactivity and communication between the educator and the students. The crucial relationship established within this type of institution cannot be substituted by a technological device.Putting the E-readers to practice within education has been approached by the group behind the project Worldreader (Worldreader.org), lead by founders David Rischer former general manager of  Microsoft and Colin McElwee. This project looks to provide E-readers to children and schools in certain developing countries, one country being Ghana. These readers are suggested to benefit the children and their families in a multitude of ways that a physical book is not able to achieve. On the question of why they believe this to be the case, they answered;

First, once e-readers are in place, schools and families have near-immediate access to hundreds of thousands of books, from new textbooks to current best-sellers like Twilight. Second, the cost of shipping these books is nearly zero, even to very remote areas, compared to $1.00 or more per book just to ship a container to port. And finally, the cost of digital content is falling quickly: many current and classic digital books are priced at one-half or less of the hardcover list price, and many others are free.

Although the concept shares an admirable ground, the practicality of the project could be argued against. Such as mentioned previously by Chantal Garrison, the technological method would find it hard to compete with the benefits of pedagogical approaches. The students deserve a more motivated teacher core and the necessary basic school equipment, such as paper textbooks etc. The focus on e readers seems like a giant leap into technological advancement for such remote locations in which electricity and internet is no guarantee. These areas also being poverty stricken could also be argued as not safe enough for these young children to have such valuable device in their possession. Moving on from this specific example I believe its safe to suggest, that E readers entering the education platform is not a poor suggestion, although I do not see this kind of advancement take over the role of books. E-readers might be introduced as alternative and complimentary study tool, but the role of the educators and the librarian will most likely remain essential.

Gorissen C., (2009) Towards an educational model of eReaders in education.