Pleasure and Desire in The Matrix

The Matrix is often used as an example of several phenomena when it comes to new media analysis. The following fragment for example, the one of the blue and red pill, is often used as a proof of mythology in the Matrix or hyperreality as described by Jean Baudrillard. But, of course There are other perspectives and concepts through which this object (the scene of the pill) can be seen. If you take the mythical view the paradigmatic relations will become prominently visible and the “pleasure in looking” or scopophilia by the spectator (Mulvey: 1975: p.60) will probably be underexposed.

The apparatus theory consists of the relationship between viewer and film text which results in voyeuristic phantasy. The viewer as a subject experiences the cinema as a dream or phantasy and in this process the specator responds to the text and gets the feeling that he/she gives meaning to the film itself (Pisters: 2003: p.25-28). Ideology is part of the medium itself which creates the dream situation, also through camera and editing. Identification with the camera itself and the film characters is possible because all traces of enunciation (efforts by the author) are erased. Freud’s psychoanalytic theory has resulted in the discovery that no man is in control over his own thoughts, feelings and deeds. Cinema sends the viewer and by this the movie, most of the time unconscious, has a great influence on the thoughts and feelings of the crowd. Particularly in this fragment of The Matrix this is relevant when Neo asks for the truth and Morpheus replies:

“That you are a slave Neo. Like everyone else, you were born into bondage, born into a prison that you cannot smell or taste or touch. A prison for your mind”  (Wachowski, 1999)

Man plays a second fiddle and is a prisoner in a structured system, a dominant and symbolic order. Much of the spectators of the movie will recognise this and identify themselves with this world view, with the sociale pressure of their own culture and society in mind. There is a longing for pleasure in everybody says Freud and a person longs to be satisfied in those wishes and desires:

Except this, the viewer is witness of a secret happening in which Neo get’s a chance to get ‘out of the system’ and to escape the miserable world he is currently living in. The spectator longs to be released from control too and experiences the events of Neo intensively. For, the crowd knows Neo because they know the situation he is in, in fact they sympathize with him deeply. The dilemma is recognizable as well because we all sometimes have to make important, life changing choices without long-term vision. Inner struggles consists of  the ‘id’ which confronts the character with sexual impulses and at the same time the intervention of the reality principle through the super-ego:

Desire is key and critical in the way the Oedipus Complex is shaped. People continually search for an object of desire to fulfill their own desire like every boy searches for the replacement of the mother by another woman. Woman are also described as signifiers or sexuality by Laura Mulvey (Penley: 1988: p.74). When it comes to The Matrix, Neo’s object of desire is Trinity: at the moment Neo sits down in his chair he is looking distracted at Trinity who passes by to leave the room. Neo looks down which gives you the idea that he is watching Trinity’s hips, this is a type of voyeurism or fetishism: sexual pleasure derived from looking at (erotic) objects of desire. Neo is a single and lonely man (who hacks computers in his time off) so it is at least likely that he is trying to satasfy his lack: the lack of female attention and the lack of sexual pleasure.

Every human being can possibly change instantly in a hero and escape it’s bittersweet reality and fateful destiny. The viewer experiences the same challenges like Neo does and recognises the lack of truth and meaning which is typical for the postmodern society we live in nowadays. 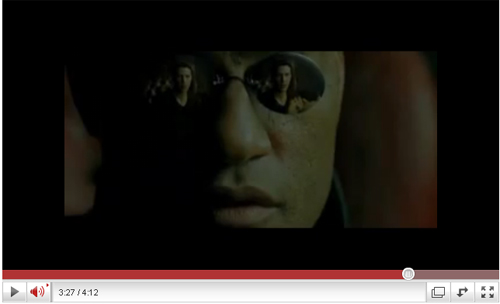