About Mareline Heijman
Prior to the master New Media, I've completed the ba Media & Cultuur at the University of Amsterdam. Interests: virtual reality, identity, future, creation, the way new media shapes us.

If blogs are Foucauldian confession than this is mine. I used to play Neopets. Nine years ago I’ve created an account to be recognized in Neopia as “Mareline”. My virtual pets, luckily a user is only allowed to have four of them, consisted of a Mynci, a Shoyru, a Chia and a Quiggle. The yellow froggy Quiggle Semafortje was my trophy pet.

In thinking about Neopets I naturally first am curious to see if my account is still working. I’m scrolling the page till I stumble upon the search engine. I fill in the blank and search for Mareline to find out my account still exists. And that Jamesbond563152 is the lucky owner of a ‘Blue Usul’ called Mareline. But 3 of my 4 Neopets aren’t visible. Why is that? Are they killed? I thought that wasn’t possible! 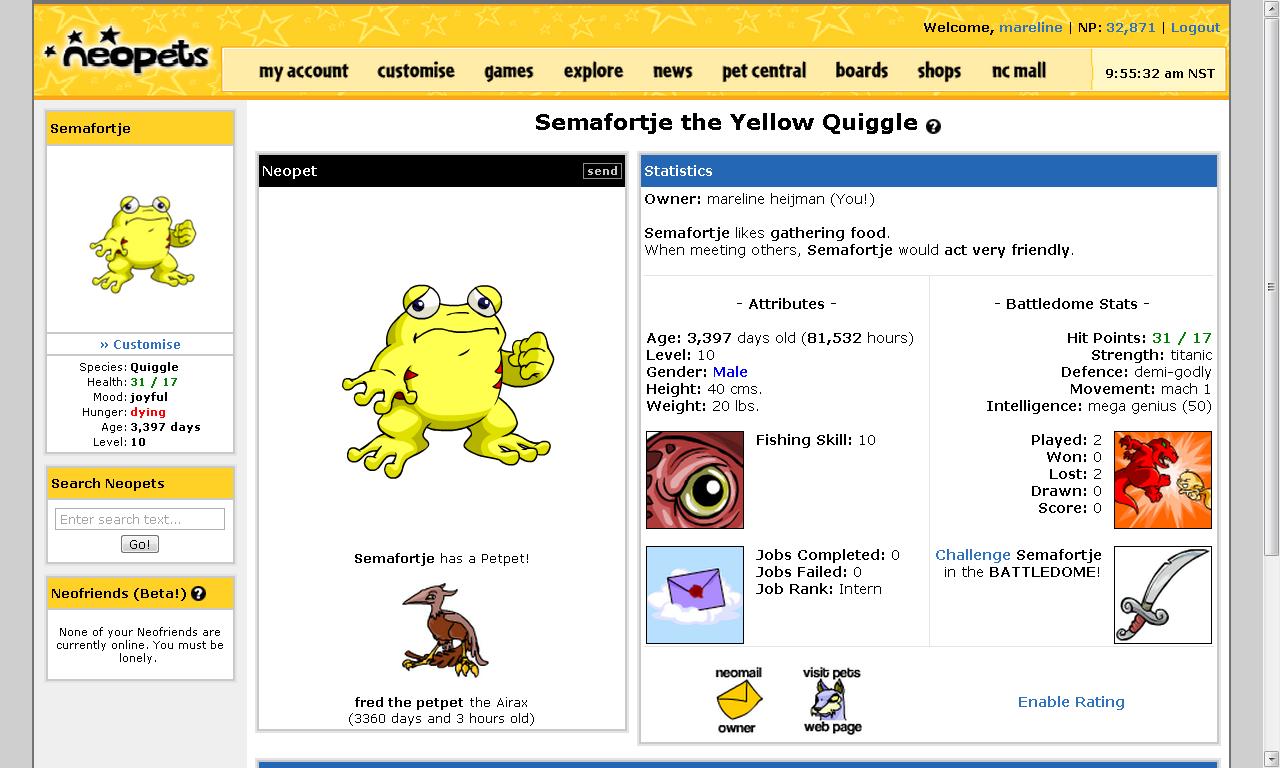 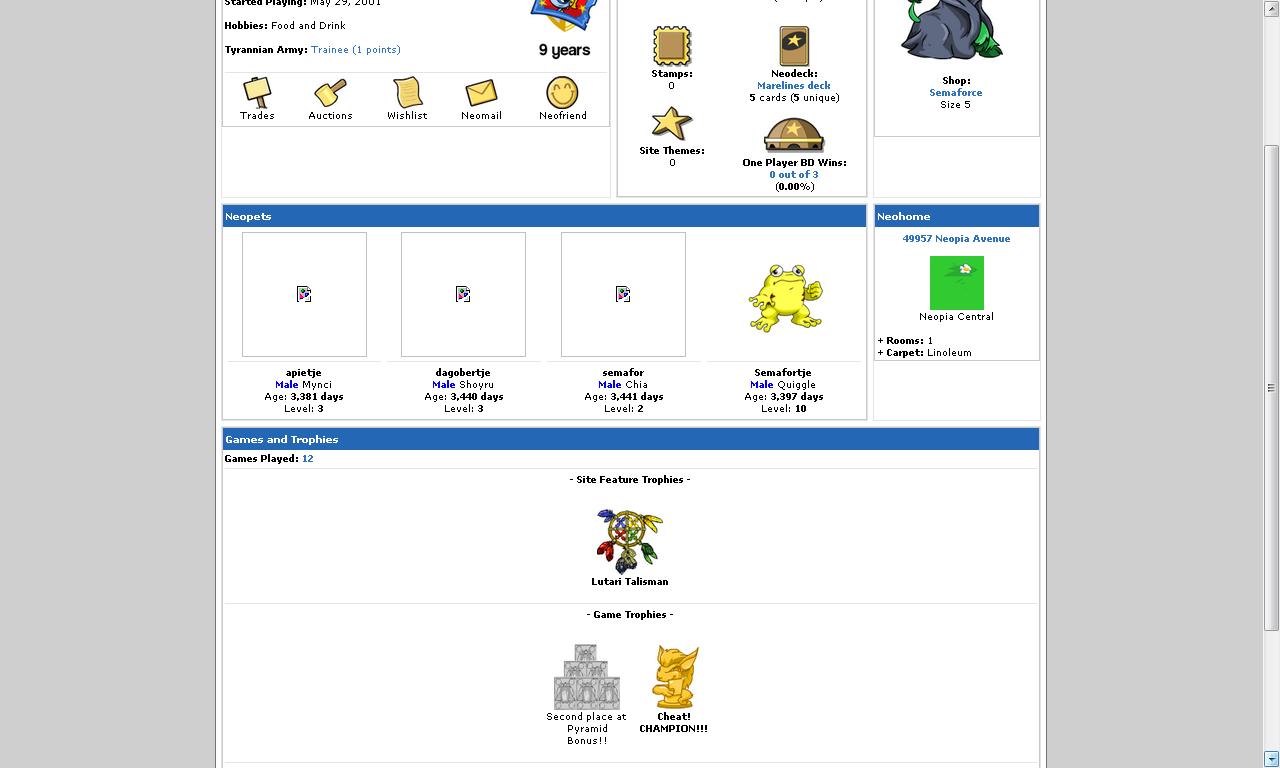 When I log in, I find out that they aren’t. What a relief. But they are sad, crying and ‘dying’. It’s heartbreaking. Maybe I should take care of my dear pets again. 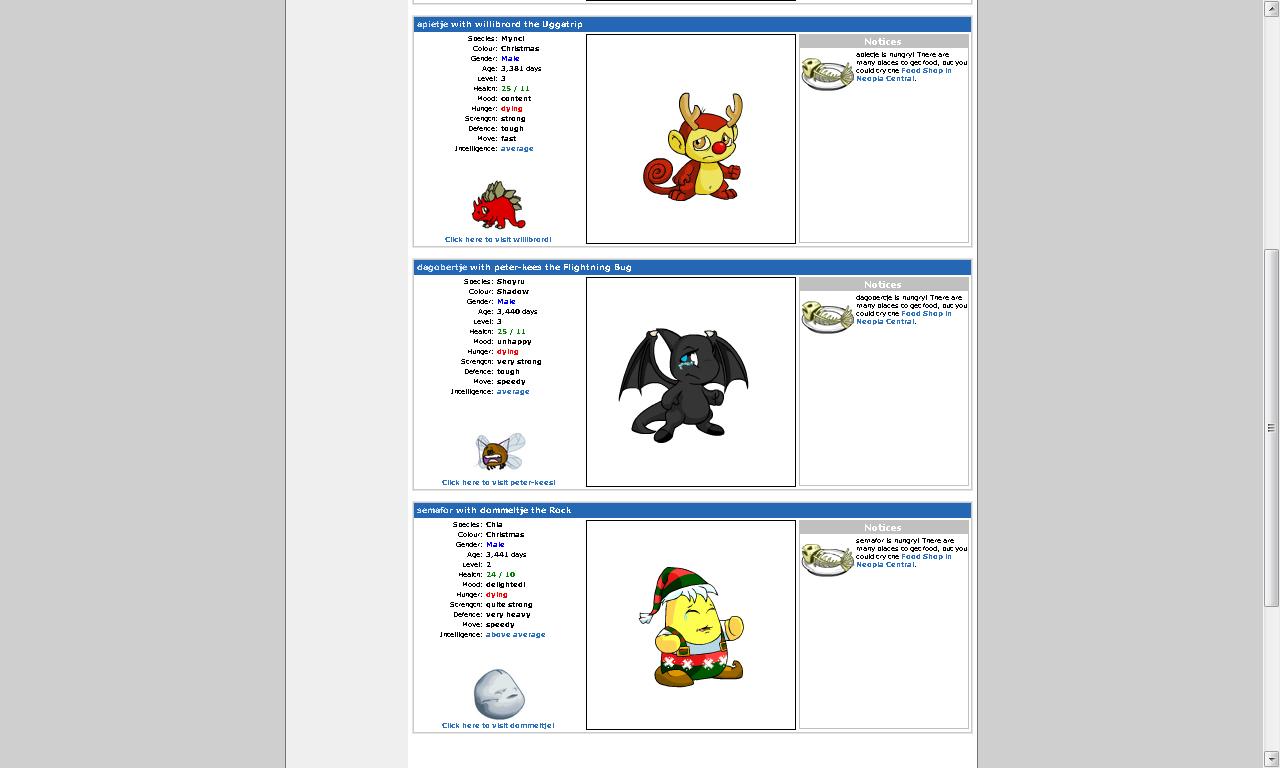 Neopets has over 30 million members worldwide. Launched in 1999, the site has been translated into many languages. It’s pets have transcanded the boundaries of the 2-Dimensional virtual realm, into the Mc Donalds Happy meals among other merchandising applications. Neopets was a really attractive game to me due to the versatility of possible tasks and features. Similar to Pokemon, a user is able to obtain virtual animals of a specific breed and train them up to higher levels. For some, the nurturing part might be more appealing. Although I don’t believe you can actually get your pet killed by neglecting these caretaking tasks, unlike the predecessing Tamagotchis. Personally I didn’t like my neopets looking sad. So I cherished them by trying to maintain their health with potions, keeping the mood up by play using toys, and keeping the hunger away by feeding them. But there’s plenty to do and see in the virtual world of Neopia. Users are able to collect rare items, play games, earn neopoints, create a shop, accesorize and design pets and Neohouses, battle each other, interact socially with Neofriends and so on. Dubious thing about neopets is that visitors can buy items with a virtual currency called Neopoints and Neocash.

Neopoints can be earned through playing games, investing in the game’s stock market, trading, and winning contests, while Neocash must be purchased with money, although certain events may allow users to earn Neocash for free. (Wikipedia)

This is a delicate issue. The possibility of earning points among other dimensions such as the formation of attachment can trigger addiction. Some measures, such as ComScore, has ranked this site as the stickiest kids entertainment site. Whats more, Neopets is full of immersive advertising. Brands are carefully integrated through games, items and so forth. Is it ethical and responsible to expose children to this sort of MMOGs? Corncern about the site has been expressed by critics including David Kushner in Wired.

“They’re encouraging kids to spend hours in front of the screen and at the same time recruiting them into consumer culture,” Lasn says. “It’s the most insidious mind-fuck ever.”

On the contrary, Mimi Ito and Heather Horst touch upon the empowering and educative aspects of being a citizen in Neopia. It is however questionable if 6-year olds are able to use and understand the complex economic and power relations at stake.

Speaking of mind-fucking, it’s interesting to note how Neopets parallels elements of the highly addictive World of Warcraft. A comparison between the two and thus between adults and children can reveal more about (internet) addiction. What elements in the sites are exactly addicting? According to the rational addiction theory, repetition of actions can lead to an addiction. Also the experience of flow is said to relate to development of addiction. Flow is the experience of pleasure together with distortion in perceptions of space and time. In what ways does Neopets promote repetition of acts and the experience of flow?

What role does attachment and affection play in addiction? I experienced myself that one can actually feel affection for digital creatures. When I killed my Tamagochi I cried like crazy. Also in Neopets, I remember I once wanted to put an animal up for adoption. But as soon as I saw the sad image of the crying pet, begging me to keep it, I couldn’t go through with it.

Myself, I wasn’t addicted to Neopet, though the stickiness is very recognizable. But as sudden as I started, I quit. I sold most of my rare items (I used to collect them and store them in my digital safety deposit box) and donated the neopoints to my little brother. But in case you’re interested in a Lemon and Lime Fish Pop, Toe Nail Soup, a Cube-Shaped Watermelon, a Mummified Pepper, an ultrarare Zeenana or a Water Muffin let me know. 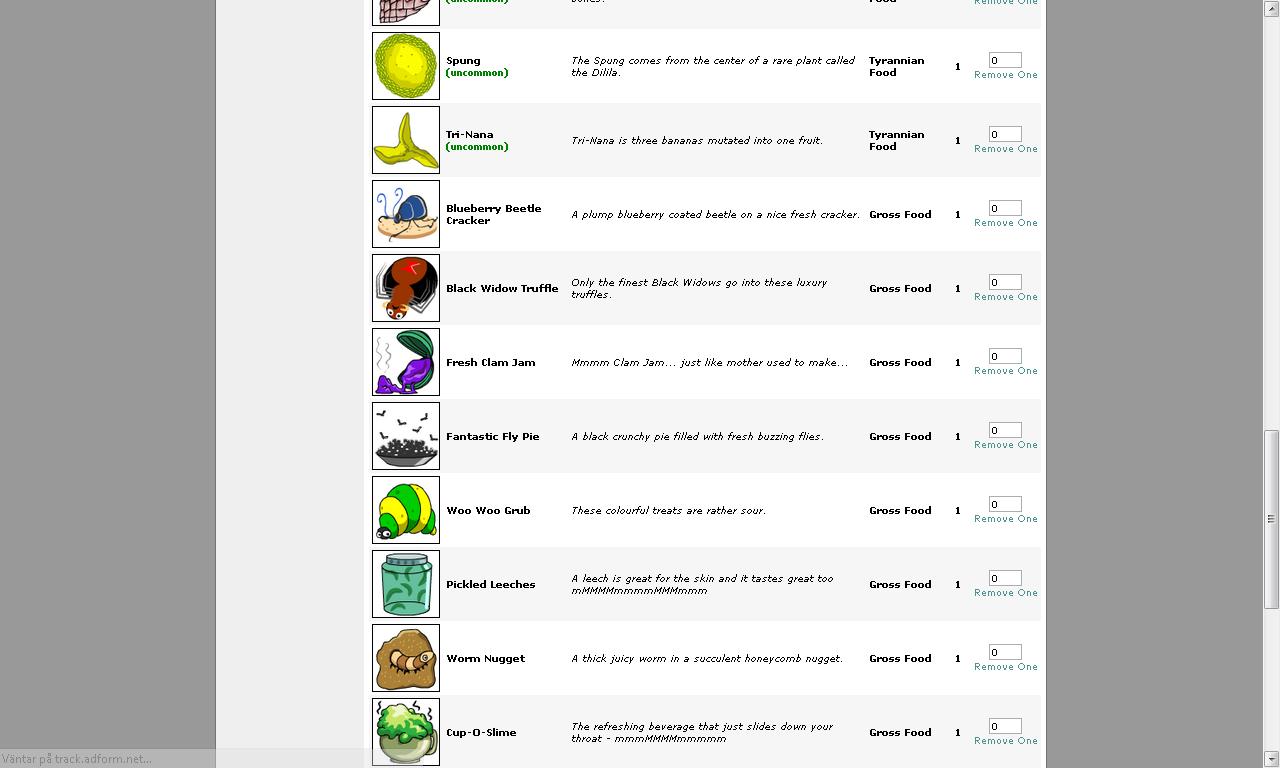