Thoughts and funny incidents on… contemporary ways to lose your job

There are many valid reasons for an employee to lose his job: the pretense of economic crisis, the company closing down, the employee’s lack of punctuality or failure to keep up with deadlines; to be more precise, there are countless reasons why an employee would be fired. And as our workplaces and professional lives follow the trends of the ages, it only makes sense that the social-networking-mania would affect the… route towards unemployment.

*Blogging your way out of business

I guess there is nothing new about that: there have been many cases of bloggers getting fired because of what they posted on their personal blog: being it because they violated their employer’s media policy, because they complained about their managers, because they published a post that interferes with their work etc. Out of the many examples that one can find online, I find this case as the most interesting, as it basically concerns a case of a media professional getting fired because of violating CNN’s strict media policy: back in 2008 Chez Pazienza, CNN producer, was fired because of his nonymous involment in “opinionated blogs” and blogging on his personal research, closely connected to his CNN work.

At least, in my personal view, this case is still not clear enough: it does sound primitive to fire someone because of his revealing his personal work/opinion under his own name. However, a pre-existing media policy gives your employer an official excuse to release you of your duties (no matter how cruel this might sound to the ears of a digital native). 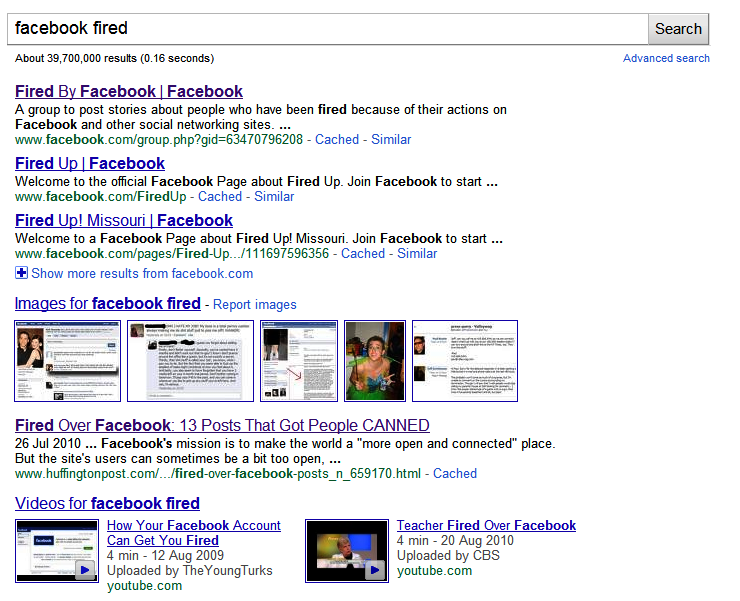 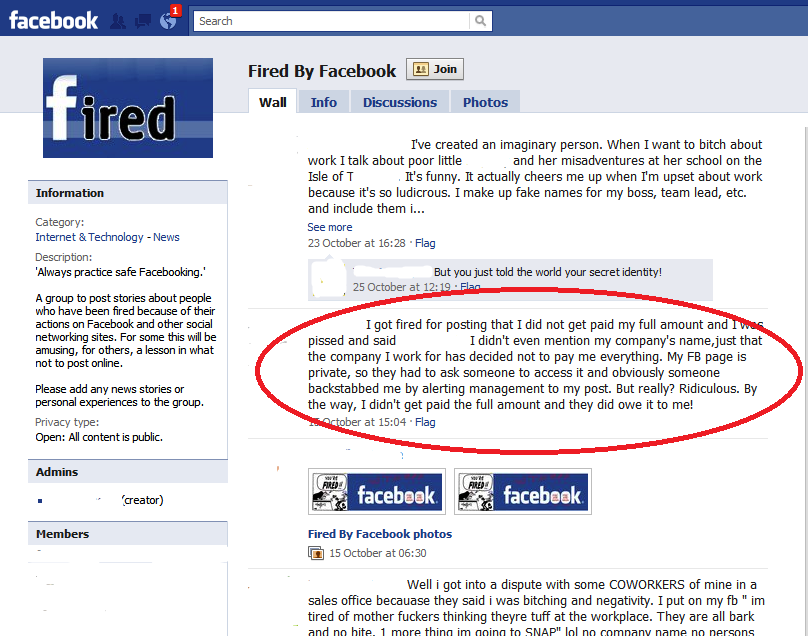 It seems that it is practically verified that a proportion of SNS users is not aware of the privacy issues concerning social networking profiles[i] and uploading too much personal information on a “high risk” environment. Well in most of the cases on Facebook (examples: here and here) users cannot be justified for… biting the hand that was feeding them. You simply do not insult your boss or your brand on Facebook. And you should never “play sick” when your Facebook status or profile pictures contradict your word.

In my opinion, what is worth examining is the “privacy leak” that appears according to users on this Facebook group. The question still remains: how do you know who can access your profile when someone who is not on your friend list can dig out data from a private profile?

*Losing your job in 140 characters or less 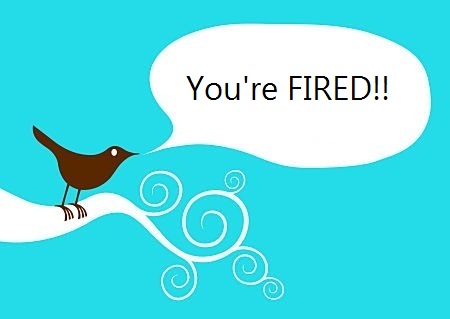 Again, too-much-information-alert! There are plenty of examples (or instructions, it depends on the way you see it) from the world of microblogging. Apparently, the “think before you print” motto should be substituted by the reminder “think before you tweet”. It is obvious that the merge of the public and private sphere through the connection capabilities offered by Twitter is confusing to a number of users who transfer their personal private thoughts on the super visible world of Twitter.

Continuing on Twitter, my personal research led me to another controversial case, regarding the convergence of a media professional’s private and public life. It is true that when you are involved in the media and you express your views on hot topics, your public image is affected. However you are free to do as you choose, right? Well, apparently not in (ex CNN’s) Octavia Nasr’s case; the aforementioned journalist was said to be fired because of a tweet on a (misunderstood?) personal remark on the highly debatable Middle East conflict. The question raised again concerns any user’s right to express his views publicly, without them affecting his personal or professional life: can this be possible? More specifically, when you are a media professional in this over connected world what can you state, what should you state and what should you not?

*The media professionals and the rest: What should we do?

it is an undeniable fact that it is socially acceptable, in real life, to complain to your offline network (family, friends, coworkers) about your job, your boss, your paycheck. However, it is still a highly debatable issue if it is alright for your online self to do so, on a profile (mostly disregarding the degree in which blogs, Facebook, twitter have penetrated into our lives, disregarding  the fact that Social Networking Sites have marked the spirit of our times).

I can understand that the vast majority of the readers would agree that it is mostly the user’s fault for letting their private views emerge through Facebook or Twitter. Despite that fac,t it is not always clear that the users/ bloggers are to be blamed for letting their views affect their occupation status. There are some cases in the media world that make an individual  feel that it is worth opposing to the company’s decision, sometimes even worth fighting for a different situation.

For example, meet my Greek friend, The Stranger, on WordPress since 2006, young journalist, currently unemployed. Actually, for the sake of accuracy, only a couple of weeks ago he was temporarily employed and fired within days because of this post, where he complained about his salary, simply because he would receive 300 Euros, for a home-based/8 hours per day/ 7 days per week/monitoring gossip TV shows/ reporting about gossip shows job. Let me explain an important fact: average media professionals in Greece are underpaid. Young media professionals in Greece face an even worse situation ( as young professionals in general). Everyone is aware of the black market- no social security- no salary de facto situation going on and yet no one is willing to speak up and express any kind of opposition. And yet, one could use his blog to express his agony on the fact that he is about to work with the smallest monetary reward possible; and he is fired for that fact as, according to the manager’s view “no one is forced to accept our offer”. (Which is not exactly true, after 100 days of unemployment in your late twenties, you may not have the luxury to not accept the job).

Yet, to return to the initial subject: what can you say and what can you not on your blog? When should it immediately affect your profession? Is speaking up for an important matter that affects your professional life ethical or immoral towards your brand/ your employer? Where does the right to speak up for yourself start to tranform in the cause to lose your job? And last, what is the new code of ethics on professional behaviou, as formed for media professionals in the time of social networks?