Economies of the Commons 2: Yann Moulier Boutang on Sustaining the Free and Open

Sustainability of the Free and Open: From Terra Nullius to the New Commons

In his talk at the Economies of the Commons Conference on November 12th at De Balie in Amsterdam, Yann Moulier-Boutang, editor of the Quarterly French Review MULTITUDES and professor at the University of Technology of Compiègne, discussed the fate of digital commons by comparing them to the ancient commons of pre-colonial primitive accumulation, such as fishing, hunting and trade. 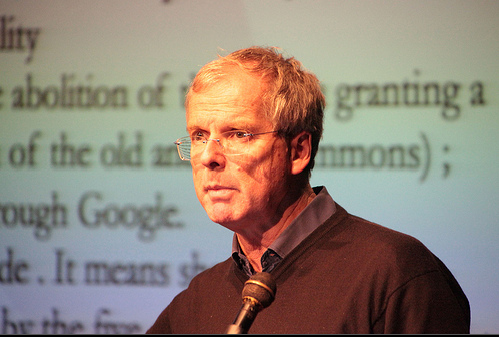 In reference to Elinor Ostrom and her studies, Moulier-Boutang pointed out that the absence of private property or state allocation of goods does not automatically mean that bundles of collective rights cannot ensure the sustainability of common goods. As cases of traditional American tribes have shown, this kind of common rights system (based on collective usus, fructus, access and harvesting) has in the past been clearly more efficient and sustainable than any kind of state or private ownership. Once the colonizational era ushered in, the principle of ‘terra nullius’, in other words the idea of a ‘land that belongs to no one’ was introduced in order to expropriate aboriginial groups and exploit available resources on this land that from then on seemingly had no owner.

When taking the leap to today’s digital commons, Moulier-Boutang refers to the importance of the Gutenberg revolution and its effects on making knowledge goods abundant and scarcity dwingling. Starting from this point on, immaterial goods such as science and knowledge in books where part of the public domain and thus, patenting and copyrighting were introduced for the sake of finding a compromise between state interests and the private interest of the author and creator.

However, economic sustainability for producers of knowledge was not easy to be ensured in the long run, as state subventions for authors, scientists and artists could not simply be generalized and the market provided the same chance of revenue for everyone of these creators. The solution introduced for this was hybrid: big infrastructures were funded by the state to ensure fundamental art and educational culture, whereas applied science and entertainment culture was handed over to the economics of the market.

With the introduction of Intellectual Property Rights, which included various forms of branding like copyrighting, the designation of origin and patenting, a first attempt was made to commodify knowledge and ensure revenue based on legal protection. However, as Moulier-Boutang points out, only 5-15% of these patents were really producing revenue and only one tenth of authors and creators could make a living with that.

So, how does the notion of Intellectual Property Rights survive in a digital environment were it is all about making things open and free? According to Moulier-Boutang, the digitalization of content has lead to a major crisis for IPR and cultural industries that are being challenged by new technical possibilities of cheating on property rights. The digital revolution obviously made the reproduction of images, sounds, words (photography, TV, magnetophone, video) easier – combined with the possibility of storing data on a personal computer, at last, the digital era created an unfeasible environment for the concept of IPR.

According to Moulier-Boutang, the de-materialization of goods through going digital could have lead to the collapse of capitalism as the share of public goods such as knowledge became gigantic. However, this was not the case. What applies to the digital techniques and the survival of its economy is the discovery of externalities. This new kind of capitalism promoted by digitalization is living through positive externalities whose emblems are search engines like Google, social networks and prosumer goods such as the Ipod and the Ipad.

In the field of knowledge production, informational effects are then achieved through an economy of contribution and P2P – this model, referred to as “cognitive capitalism” by Moulier-Boutang, captures these network externalities to build up various kinds of audiences in order to sell anything as a derivative product or service, amongst others personal data and information on real networks.

As for the sustainability of the open and free in the digital era, Moulier-Boutang assumes that Copyleft and Creative Commons are the only solution as the radical ‘terra nullius’ approach to open source is facing two essentially major problems: the system of a ‘land that belongs to no one’ is based on spoiling, wasting, and it does not provide substantial revenue for the true creative class. In Moulier-Boutang’s words “we exchange the sterile class of the intermediaries such as cultural industries for the bling bling class of publicity and mass audience” (which is provided by Google and Facebook for instance).

In conclusion, the digital era is based on the importance and re-evaluation of externalities that have to be achieved through new ways of managing the domain of goods and services that were formerly protected by IPR and have now fallen into the public domain or open source. The main preoccupation is sustainability which means avoiding the predatory use of the new digital commons. According to Moulier-Boutang, the two ways of ensuring revenue are then either obtained through an open source approach as for instance Google accessing our data freely or through Creative Commons and copyleft, which means sharing all liberties within the community.