Michael Strangelove @ Video Vortex 6: “Any Moment Will be a Youtube Moment” 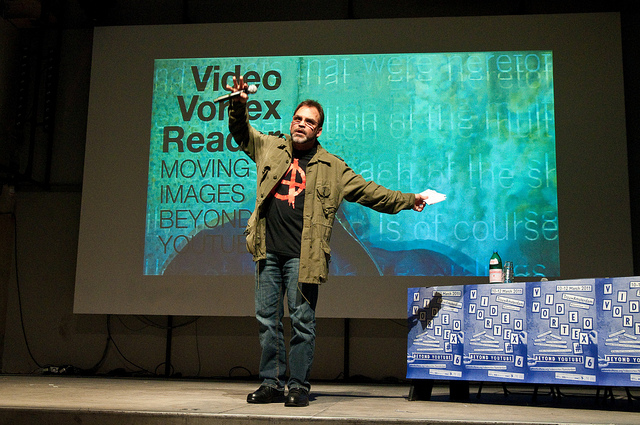 In his talk on the cultural value of amateur video, the author of “Watching Youtube: Extraordinary Videos by Ordinary People”, scholar and artist Michael Strangelove explained how amateur productions will gain greater value due to their potential of challenging the meaning of things, their subvertion of a capitalist mode of production and their use by individuals as tools for self-representation of the world. Why does ‘Laughing Baby’, ‘David coming back from the dentist’ or the ‘Star Wars Kid’ make a difference in our lives? And what is it that makes online video different from TV? Dr.Strangelove’s answer to this is straight to the point: “It’s the amateur”.

When elaborating on how online video is entering into our culture as part of the material we use for creating our world, Michael Strangelove referred to Michel Foucault’s notion of compulsory visibility and how the new generation of digital natives is growing up with the thought of radical transparency in representing themselves. This drive to be visible and to reveal one’s private life is reflecting how online video matters in people showing bits of themselves, always having in mind that any moment of their life could be moment visible for others, a Youtube moment.

“What we see through online video is what is different and what is the same” states Strangelove, pointing to the value of amateur video for constructing reality and shaping feelings by challenging the tastes and styles that are commonly recognized by the general public. In this regard, online amateur productions particularly convert the capitalist mode of production away from a centralized power, from ‘the few to the many’, from ‘homogeneity to heterogeneity’. People will talk about their mundane lives, women will be de-marginalized and given a voice, which will overall result in the challenge of official versions of the worlds and in contesting the prevalent situation. Online video then serves as the source material used for expressing what attracts us, what repulses us and how we construct reality. This alternative mode of cultural production further enhances new forms of aesthetics as through online video we can see others and we can also react with intolerance.

When asked whether critical notions of ‘the amateur’ such as the one put forth by Andrew Keen are justified, Michael Strangelove answered ambiguously. He stated that there is a valid critique of the amateur’s production and notions of free labour of users are becoming more important in the face of using user-generated content for commercial gain. As for now, the work of the amateur is showing contradictory effects and pulling in two directions: it moves between an increase in expressive capabilities and the recapturing of these capabilities into the commercial market system. However, there is a clear map of forces at work and the substantial impact and value of amateur production does not primarily lie in the production, but in the contestation of meaning of things.