As China is famous for their copied and rip-off products there is no difference in the digital sphere. Services and platforms that we have learned to love, resent or can’t go without also exist within the borders of China but only for the national market. Google became Baidu, Facebook became Renren, Foursquare became Jiepang. As social media develops and comes up with new services the latest trend in China seems to be microblogging. In August 2009 Sina Corporation, China’s largest web portal, launched a microblogging platform named Weibo. The comparison with Twitter has been made more than once but it seems like the Chinese version is even better than the original. Several people I’ve spoken to who are users of both Twitter and Weibo tell me that they prefer the Weibo service in terms of functionalities and possibilities. It basically works the same as Twitter, you login, follow people, build a network and send out your message to your world. Even though it has a lot of similarities it wouldn’t be done justice to describe it only as a Twitter clone. Weibo tries to provide a service that includes features as instant messaging, social networking, location based services, video uploads and group buying all into a one-stop social networking platform. I’ve asked Brent Deverman from Shenzhenparty.com what he thought was the best feature Weibo has over Twitter and he said that would definitely be the image uploads. And what a surprise, I just woke up today to the announcement that Twitter is going to add photo attachments for tweets directly from the homepage, which will be stored on the servers of Photobucket. 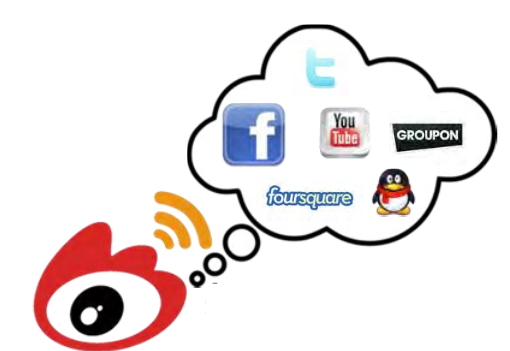 That Weibo is a big player that has quickly gained popularity is obvious from their user numbers that just reached 140 million users May this year. One of the reasons that are ascribed to Weibo’s popularity is timing, as they jumped into the social media vacuum. In the lead-up to the 20th anniversary of the Tiananmen Square protests in June 2009, the Chinese government blocked Twitter. After that the ethnic riots in Xinjiang caused the unplugging of Facebook in China. Weibo that appeared in August had an excellent timing in the process of winning eager social media souls as rivals such as Tencent and Sohu didn’t launched their micro-blogging services until early 2010. This head start has been proven to be fruitful as it now one of the top information sources for many Chinese. The significance of the platform is also visible through the number of celebrities and companies that have an account it appeared to be a great way of brand as well as personal marketing as many of them have a lot of followers. It also changed their domain from .cn to .com, possibly keeping one eye open for the international market. To spark up the speculations even more, I was informed by Joey Dembs from Enovate.com that Facebook recently even made a Weibo account that became very popular, also proving that the awareness of Facebook is still high even though its blocked. Maybe it is a strategic move to let the Chinese people know that Facebook hasn’t forgotten about them. At this growing rate it is highly possible that Weibo could hit the 200 million users milestone by the end of this year. However the number of registered users shouldn’t be taken to heavily as Kai Lukoff from iChinaStock commented, “It was not revealed what percentage of Sina Weibo’s 140 million registered users are active users. For comparison purposes, Twitter claims 200 million registered users worldwide, but its active users are often estimated to be about 10-20% of that, or 20-40 million.” 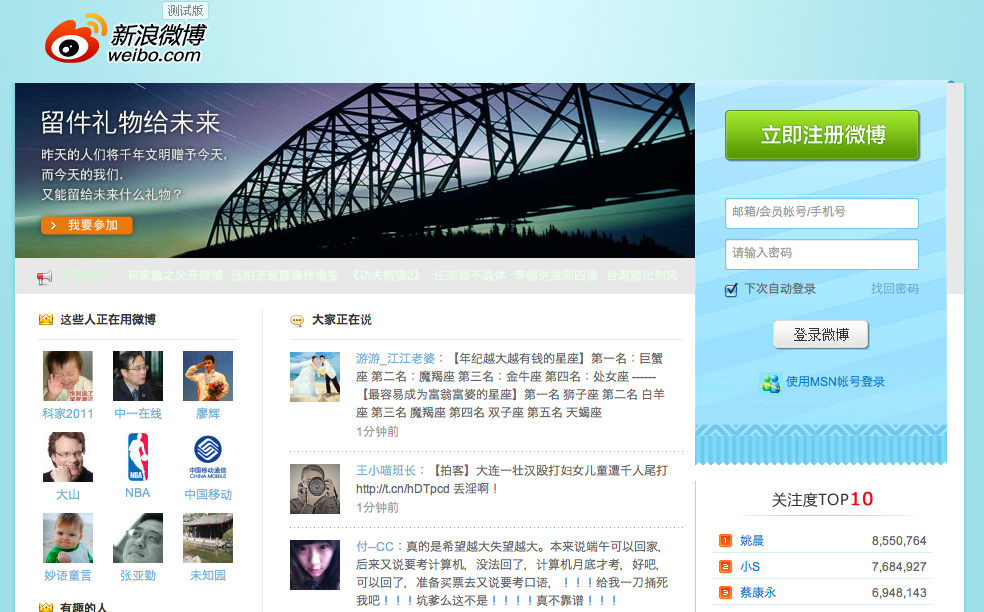 Although the statistics and strategic opportunities are nice to know I’m more interested in how this medium has influenced the users. A lot of smartphone users here in Shanghai are checking Weibo all the time as I’ve noticed and I think it is a great way to kill in between time just as how I use Facebook back home. In a conversation with Joey Dembs he explained it why he thinks Weibo shouldn’t be equated to social networking, “There are some elements of connecting with other people but its less on a personal, I want to get to know you level, but more I want to follow you because I think you’re interesting and you can add value to my feed.”  As the research company Joey works for does a weekly tracking of Weibo feeds he has a pretty good idea of what’s going on behind these doors. As in every medium celebrity gossip is very popular and he also sees a lot of societal memes. What I call a type of citizen journalism Joey calls ‘Weibo welfare’ where you see a lot of people trying to promote the cause they’re interested in. This is a very important trend and also a relatively new phenomenon happening on such a large scale in China. From my personal experience, in the past I didn’t feel that people were eager to engage in those kinds of information spreading that could even be called activism on some level. Whether you want to call it citizen journalism or something else, people are now speaking up about their personal preferences and explaining why. It’s not too highly political but just on a personal level. Joey adds that the messages spread are a very subtle, ‘here is what I believe in’ without screaming if from the rooftop, just for whoever is interested in reading it. 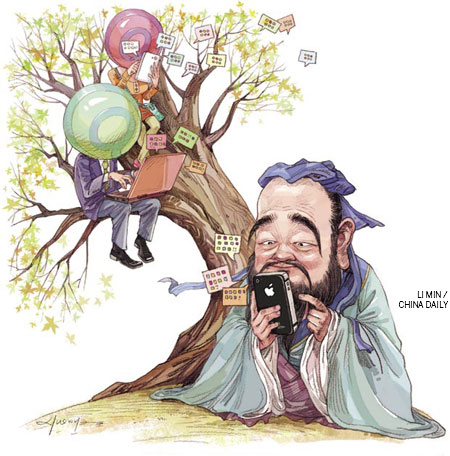 Aside from personal empowerment, even though subtle, there are different assets that microblogging provides to Chinese people. Eric Chen from Chinavasion.com emphasizes the importance of citizen journalism that microblogging and mobile internet promotes. He mentions that China doesn’t has a dictatorship but that it’s nowhere near democratic either. Now with the use of smartphones and mobile internet there can be more attention drawn to causes that would otherwise stay invisible. “A lot of people now have a camera on their phone and if they see something odd they just take a picture and use it for microblogging, those pictures can go viral. Microblogging is very popular in China at the moment, it plays a very important role in anti-corruption.” The most significant thing that technology has brought to this generation is a higher level of freedom. Eric sees that this higher level of freedom makes people more active in social issues trying to reveal the bad things that are happening within the society. An example of this was during the Spring Festival, when microbloggers joined in an initiative to rescue abducted children. The Chinese Academy of Social Sciences motivated thousands of citizens across the country to take snapshots of child beggars and put them online. The photos formed a online database of possible abducted children and resulted in freeing quite a few victims. Inspired on this initiative the police of Shenzhen asked their net-citizens to upload photos of suspicious looking practices to help them create a online database to fight crime. There is not only a change in the ways of spreading information but also the reaction that it causes. Joey describes that the Weibo generation is not taking news as heavily or seriously as their parents might do, “I think that if an issue comes out on the news and gets picked up by Weibo, people would just make fun of it saying things like ‘our government is so shit’. I think reacting with a cynical twists is huge now, the society memes.” So, I guess instead of the international trending political Twitter revolutions, China has its own slowly progressing societal Weibo revolution.