Wikimania Day I: Plenary led by Sue Gardner and Q&A panel with the WMF Board of Trustees.

Sue Gardner, Executive Director of the Wikimedia Foundation, had a very difficult task to accomplish: in 25’ she had to report on the Foundation’s activities during the year 2010- 2011, but also to treat the attendees to a sneak preview of next year’s action plan. 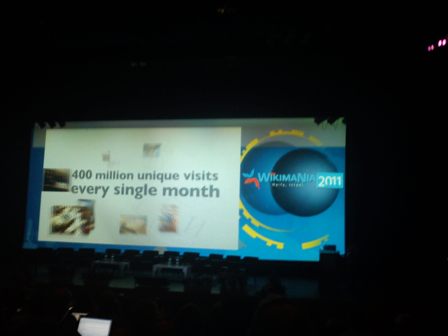 She did not have to try hard, however, to electrify the audience. The impressive opening video displayed on the wide screen of Rapaport Hall, had already brought a party atmosphere, presenting the celebrations for Wikipedia’s 10th anniversary all over the globe but also some interesting statistics:  Wikipedia receives 400 million visits every month, contains 18 million articles in more than 270 languages and ranks as the fifth most popular ‘web property’ in the world.

Gardner described her presentation as an “accountability exercise” since she had to provide “the stakeholders, the partners, the friends” of the Wikimedia Foundation, us, with statistics, data and graphs. However, it was obvious that she wanted to make the procedure as fun as possible. Therefore, she invited us to find a person we did not know and hug him, touch him, share with him experiences from the conference. I must confess I was relieved that the fellow Wikipedian sitting next to me did not feel comfortable with the idea of hugging a complete stranger. In our brief and rather awkward conversation, I learned that he was from Sweden and worked for the local Wikimedia chapter. He attended the conference hoping to meet people from other Wikimedia chapters and to start new collaborations. To his surprise, I informed him that Greece does not have yet a national Wikimedia chapter. He asked for more details but Sue interrupted the bonding session to continue with her presentation.

Wikipedia: Where does it stand today?

In the first half of her talk, Gardner gave an overview of the current situation regarding Wikimedia projects with an additional focus on Wikipedia. 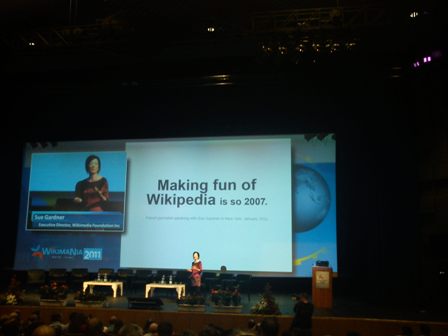 The unexpected coverage that the 10th anniversary celebrations received constituted- in her perspective- the strongest proof that people stopped being skeptical or critical of Wikipedia a long time ago. “Making fun of Wikipedia is so 2007” she said, quoting what a French journalist told her during an interview. The audience responded with an enthusiastic applause but I felt quite sad that we never learned the journalist’s name. Her line was written in golden letters in the history of Wikimania 2011, but people would always quote her as “the French journalist speaking with Sue Gardner in New York, January 2011”.

Measuring the progress, she observed that while most of the goals were accomplished, the Wikimedia Foundation and the community have still lot of work to do in order to increase participation and to support diversity within the community. However, she expressed her excitement that 22% of the attendees were women, which, in her words could be “a small indicator that we are going in the right direction.”

So what comes next?

After highlighting the challenges Wikipedia will be facing in the next few years, Gardner presented a series of ongoing activities. The surprisingly successful fundraising campaign, the editor recruitment efforts in India and Brazil, the Public Policy Initiative – a project that aims at persuading teachers to assign writing Wikipedia articles as coursework- and the development of new features, such as the Article Feedback tool and the ‘WikiLove’ button, were such examples.

Then, Gardner moved on to the most interesting part of her speech where she introduced the goals for the year to come. Out of the seven targets mentioned, I identified the following key directions:

For the past few years Wikipedia has been dealing with participation and editors’ retention issues. As the Editor Trends Study revealed, the number of active contributors has plateaued,   while the number of ‘newbies’ keeps dropping. Therefore, it is critical for Wikipedia to invite more editors to join the project but also to make it easier for ‘newbies’ to penetrate.

The Wikimedia Foundation plans to deal with these issues in two different ways: making the editing environment more user-friendly by implementing a visual editor, as well as encouraging the editors to socialize and interact with each other. The addition of the ‘WikiLove’ button, that allows contributors to send each other messages of appreciation and support, is only the first step. The Wikimedia Foundation encourages its editors to experiment in this area and to come up with new ideas.

The implementation of such social features however has already led several critics and Wikipedians to speak about a ‘Facebookization’ trend. In that light, Harel Cain, who headed the panel, asked the Board an interesting question: “Do we want to make our projects kind of social networking sites where editing will be just a distraction?” 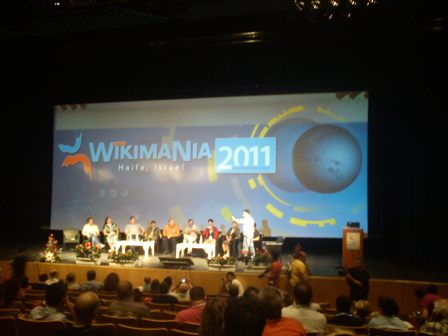 Jimmy Wales replied emphatically that Wikipedia is not turning into Facebook neither into a game. “Building game mechanics into a website is what you do when you actually don’t have a good idea of what you are supposed to be doing.” he commented. To him, socialization within the Wikipedian community is not a new trend. Editors have been awarding fellow Wikipedians with barnstars for a long time now to show their appreciation or to just say ‘thank you’. What changes now is the software so that saying thank you and being human within Wikipedia becomes easier.

Kat Walsh, a member of the Wikimedia Foundation Board of Trustees, also replied to Harel’s question, identifying the problem in Wikipedia gradually becoming “part of the internet, a site that everybody knows”. She expressed her hope that the implementation of new social features will bring back the enthusiasm of the early days, when Wikipedia was considered to be ‘cool’ and exciting. Regarding Wikipedia’s ‘Facebookization’ debate, Kat argued that Facebook is all about socializing. Wikipedia has much more to offer. In her words “Wikipedia is like school, like work… you get something done AND you are meeting new people”. Thus, the addition of new features does not make Wikipedia look more like Facebook; “it makes it look more like the rest of your life”.

Gardner argued that students have always been “the fuel of Wikipedia”, since they constitute one of its main editing forces. At the same time, many teachers have been trying to be innovative and to make their classes more interesting. Therefore, the Public Policy Initiative was launched with an aim to merge these two tendencies and to “bring the right people together”. Despite the criticisms that Wikipedia has received from teachers and academics in the past, the Initiative achieved unexpected success: more than 1.8 million bytes of text were added by the participants in the English version of Wikipedia, while the quality of the articles they started was significantly improved (140%).

To further encourage students’ active participation and to expand Wikipedia’s use in the classroom, the Wikimedia Foundation announced in the beginning of 2011 the launch of the ‘Global Education Program’. This pilot program aims to reach teachers from various disciplines and to recruit ‘Ambassadors’ in order to teach students the basics and support them in their editing attempts. What is important to note is that the ‘Global Education Program’ will have a much broader scope compared to the Public Policy Initiative, expanding its activities in several countries (India and Brazil will be a priority).

In the Q&A session that followed, a student, whose professors did not allow Wikipedia to be used as a reference, asked the Board whether they believed that teachers will at some point realize the educational value of Wikipedia or if they will always have to be ‘persuaded’ about it. Phoebe Ayers, Executive Secretary of the Board and an academic, replied that she has already observed a change of attitude towards Wikipedia. People, academics included, seem to have accepted it as “part of the informational universe”. Moreover, she shared her positive experiences in attending the first ‘Wikipedia in Higher Education Summit’, held 8-9 July 2011 in Boston, where hundreds of passionate students and professors stated their interest in using Wikipedia in the class. “What I tell academics” Phoebe concluded “is that we have an obligation to make this thing [Wikipedia] better”.

Gardner admitted that she tried to edit Wikipedia on her mobile phone but it turned out to be quite “painful”. However, she seemed quite confident that editors can find new ways to interact via mobile phones, by uploading for instance pictures from to Wikimedia Commons.

Finally, Gardner revealed that the Wikimedia Foundation plans to develop partnerships with mobile providers in order to enable people to use Wikipedia on their phones for free.

The impressive statistics shown in the opening video attest Wikipedia’s global popularity. At the same time however, numbers reveal that internet users from countries of the Global South do not use Wikipedia as much as their counterparts in the Global North. Thus, a major challenge for the Wikimedia Foundation is to engage readers in these parts of the world to become active contributors. Editor recruitment process has already started in India but the Foundation plans to invest further on it, as well as to launch similar activities in Brazil.

3.      Please try to be extra supportive of people of different ages, backgrounds and gendersby listening to them and encouraging them to be bold.

5.      Try not to template people, and rewrite current templates to be friendlier where possible.

1.      Help test and localize WikiLove and implement ideas from the idea log.

2.      Build any idea that strikes you as a MediaWiki extension, gadget or patch.

3.      Test the mobile site on your phone. Tell us how you use Wikipedia while you’re away from your desktop, and how we can make it better.