The humankind is moving online. Our work, relationships, communications, banking and even shopping can be done online today, and where possible we’ll happily take the easy ‘one click away’ shortcut, because it’s faster, more efficient and more convenient. For most, the internet is comfortable. But it’s not all so beneficial after all. Elias Aboujaoude, MD writes in his book ‘Virtually You‘ about the dangerous effects of the e-personality of ours.

Aboujaoude specialises in obsessive compulsive disorders and brings numerous examples from his medical work, to illustrate the negative aspects of spending time online. He makes it very clear that he talks about the extreme cases, but no concessions should be made about the effects on the general public. Apparently everyone is affected, and more so than we would find comfortable admitting.

As Aboujaoude is a well-renowned medical researcher and a celebrated professional in the field of psychiatry, there is an almost instant authority in his writing. The authority is convincing, and without a doubt a lot of thought and experience has been put into the making and writing of the book. It is written in an easy-to-digest and approachable way, but after reading the 300 pages (on paper), I feel guilty writing this review online. It feels like I’m doing something bad to myself and later on to the society. This is not meant to come across sarcastic, the worry is genuine, especially because the author’s argument makes a lot of sense and is well-reasoned throughout.

So, what are the bad effects being online has on us? It seems that the internet has the potential to bring out the worst in us. Aboujaoude argues that the term ‘internet addiction’ is an elusive one, because the pathological behaviour and internet use could also be a manifestation of a deeper non-related psychological deviation. So let us treat the term with some caution, but generally speaking, excessive use of the internet implies an effect of real lives: ‘wasting’ time online, real human or work relationships suffer etc. 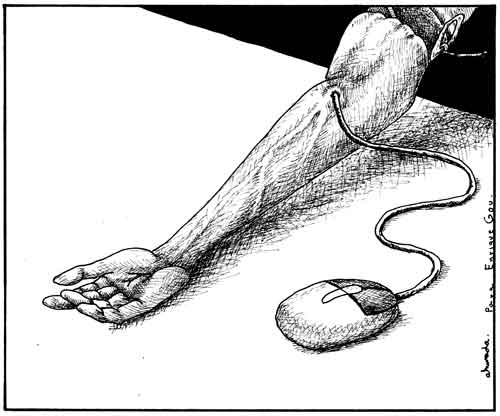 In the internet reality people tend to create a so-called ‘e-persona’ which can be drastically different from who we are in real life. This could be a positive thing for people who experience social anxiety in real life and the e-persona becomes a tool for managing the anxiety, but in most cases things don’t seem to go so well. Aboujaoude touches upon the topic of online dating throughout the book and uses it as one of the main examples. The online persona is generally more outgoing, attractive, impulsive, with exaggerated self-confidence etc. This kind of behaviour can lead to impulsive behaviour (e.g. promiscuous sexual encounters) and also starting to prefer the online persona, which wrecks real life relationships, like the author described from experience with his patients.

The online success of companies like Google and Facebook have created a mass of people with delusions of grandeur. There are compulsive shoppers and gamblers, again destroying (and bankrupting) real lives. Internet also feeds narcissism and need for admiration – people are obsessed with the online footprint they are leaving. People get used to technology satisfying every need (and they start feeling entitled to have everything at their fingertips). Our sense of community is collapsing while seemingly we’re more connected. We have lost all privacy and therefore a quintessential part of our identity – the metaphorical protection of our egos that anonymity and privacy provide. Students download their homework, sex offenders and murderers find victims online. Suicides get encouraged on pro-suicide forums. Bulimics and anorexics share tips on how to make themselves vomit easier. Violence no longer disgusts us the way it used to (YouTube videos are to blame for this).

Our language and means are communication are in “infantile regression” and emoticons are especially bad. We don’t read the way we used to, we skim text horizontally, not vertically. Our knowledge is superficial and the abundance of information creates an illusion of knowledge, whereas instead of memorising something, we more and more rely on the thought that the answer is only a Google search away. There are also changes in our brain (reference to Nicholas Carr’s article ‘Is Google Making Us Stupid‘). Everyone is convinced of their high qualification and level of being informed. Journalism and true news are dying out. And we’re not even paying attention.

The points outlined above are only a selection of negative effects excessive use of the internet has on us. It is impossible to read the book and not be horrified about what will become of our human kind and maybe we all do need a good shake to wake us from this internet-induced mass coma that we seem to be steadily heading towards. Being a new media student, reading this book is especially worrying because it is very likely that my work professionally and academically will very much be online. I’d like to think that I’m not slowly becoming a sociopath because I talk to a lot of friends (of whom a lot are abroad) online. I’d also like to think that even though I spend a lot of time online, I am still doing something constructive and acquiring knowledge (that actually sticks, but it seems that in a few years’ time my brains’ hardrive will be only a fraction of its former capacity).

We all beg to differ, but a little self-assessment seems like an urgent necessity after reading this book. It could easily be we’re all just in that much denial about the big problem. Aboujaoude doesn’t hold back with the scary information, and we should be scared. Our personalities might be on the brink of disintegrating and we’re happily typing and clicking away while it’s happening. The only criticism of the book could be that it is indeed very, very negative. Honest, well argued, but negative. Being a mightily naive (but now consciously naive) new media student, I do want to believe that there is a little gain in all this pain. Otherwise the only reasonable thing to do would be going in a virtual bootcamp, throwing the laptop out of the window and disconnecting from all forms of internet (yes, even your smartphone).

The book should be an essential read to most internet consumers. It’s an eye-opener to the doomsday model of the way internet affects us. Just so that we’re a bit more aware of what the implications of wasting too much time glued to the screen can be. Also, it might be a bit of a challenge to go through the 300-page book (if you get the paper version), because apparently our attention spans and reading skills are also deteriorating. So take the challenge, prove the author wrong at least in one aspect and see if there is some truth in his writing. Perhaps knowing what all of this could bring will help reverse some of the self-destructive aspects of the effects? Here’s the author’s own finalising thought on the book.

This book is not intended as a manifesto for renouncing the virtual world.  It would be both naive and futile to preach that – no one can imagine life without Google, and, even if it were possible, few people I know would be interested in living it. . .   My goal, then, is less painful and more modest than to suggest we log off.  I have tried, instead, to offer a note of caution, an exhortation to think before we click, to proceed in the virtual world with increased caution, knowledge, and, above all, self-knowledge.  Just as a teenager becomes one naturally, without planning on it or necessarily working toward it, we all have, whether we approve it or not, already come of age as virtual beings.  We cannot, any more than a teenager can, reverse the clock or unrelease those hormones.  The question before us is what to do with ourselves now, not how to capture some romanticized pre-virtual innocence (pp 288-289) 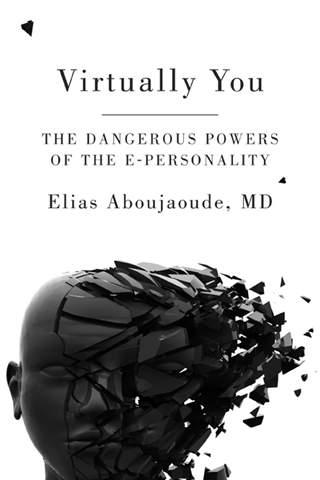