Book Review: The new rules of the game

Note: this is a review on a Dutch book called De nieuwe regels van het spel. This book is not available in English. Visit the RMO website for more information.

In this advisory report, the Dutch Counsil for Social Development, an advisory commission to the Dutch government, explores the role of the Internet in public debates. As in any democratic society, public debates are of great importance in the Netherlands. We can see public debates as a away to ensure that social norms and public opinions, which are often based on divergent values, are given tangible form, as well as a place on political and social agendas.

Some Californean ideology still comes to mind when we think of the Internet and it’s potential to facilitate revolution and bring about social change. The Internet has the potential for the free formation of public opinions, and there are many different places for people to express their point of view. Users can select information from a wide range of sources, and also contribute to these sources by submitting reports, commenting on reports or sharing information about news events. It is easier to find likeminded people and organize discussions, unhindered by time or location. Citizens now take on the role of rapporteurs, opinion-makers and journalists. This not only changes their own position, but also that of professional journalists, politicians and the government:

The professional codes, social norms and legal rules that apply in physical contexts are not directly applicable in the online world. The boundaries between the personal, public and political domains are blurred, so that the context within which statements are made on the Internet is not always clear. For example, while the established media are bound by professional
codes of conduct and (sometimes unstated) norms, such as the right to a fair hearing, on the Internet they operate in a sort of vacuum in which the existing codes of conduct appear not to be tenable.

We can see new social norms and regulatory mechanisms emerging in online environments. With the new rules that Internet users are developing, we see the government, politicians and journalists repositioning themselves and applying different tactics and communication strategies to develop a new code of conduct.

Referring to Benkler’s 2006 publication “Wealth of Networks” (download pdf), the report describes that a democratic regime assumes that all interests of civilians are equally respected as a possible subject of political actions and that all that are governed should be able to have a say about their government’s actions. Therefore, the system should allow for a diversity of opinions and room to express those opinions.

This report suggests that Internet can strengthen the plurality and accessibility of public debates, but there are some catches here. Even though many people have access to the Internet in the Netherlands, not everyone uses it to enter in the public debate. Most users still see the internet as a tool for gathering information, not necessarily for sharing and discussions. In addition, it is problematic to assume that the Internet is a free and uncontrolled place. There is a presence of all kinds of inclusion and exclusion mechanisms in place, which we cannot always perceive. We are more often confronted with likeminded views than with contradicting visions when searching for information online. There are some big players which can easily spread their message, making it harder for alternative voices to be heard. Websites have a tendency to link visitors to other websites with similar values. Internet users therefore find themselves in what Sunstein called a system of ‘echo chambers’¹. In this sytem, a user thinks he has access to a range of information and perpectives, but in reality they only have access to a limited network of information.
Not only social factors, but technological factors and infrastructures determine the information we receive. Search engine algorithms and Internet service providers’ regulations are an important force in the way content is presented to us as end users. These players in the field are the new gatekeepers of information and therefore color the public debate significantly.

The Internet is still evolving rapidly, both socially and technologically, and it is difficult to predict what the situation will be like a few years from now. However, precisely that dynamic in the development of the Internet creates a need to pause briefly and ask questions about the changing position of institutions such as the government, civil-society organisations and the established media within the arena of public debate. How can the government respond to the innumerable online discussions, both small and large, which suddenly flare up like wildfire is and create a public issue of national or even international proportions? What role does the journalistic profession have to play, now that journalists find themselves accompanied by ranks of amateur reporters? How far can the new media be encouraged to develop their own codes of conduct to ensure that information and debates continue to be balanced and represent a full range of views? Are new rules needed to govern openness, transparency and accountability?

http://www.denieuweregelsvanhetspel.nl is the website that was launched by the RMO to start an online discussion about Internet and the public debate. It’s interesting to me that an advisory board that writes a report warning us that only a small portion of society participate in online debates, and that these people are only from higher level education, still chooses an online discussion platform to explore the above mentioned questions. Whatever the goal, this platform will probably still only reach that small portion of political-minded contributors. 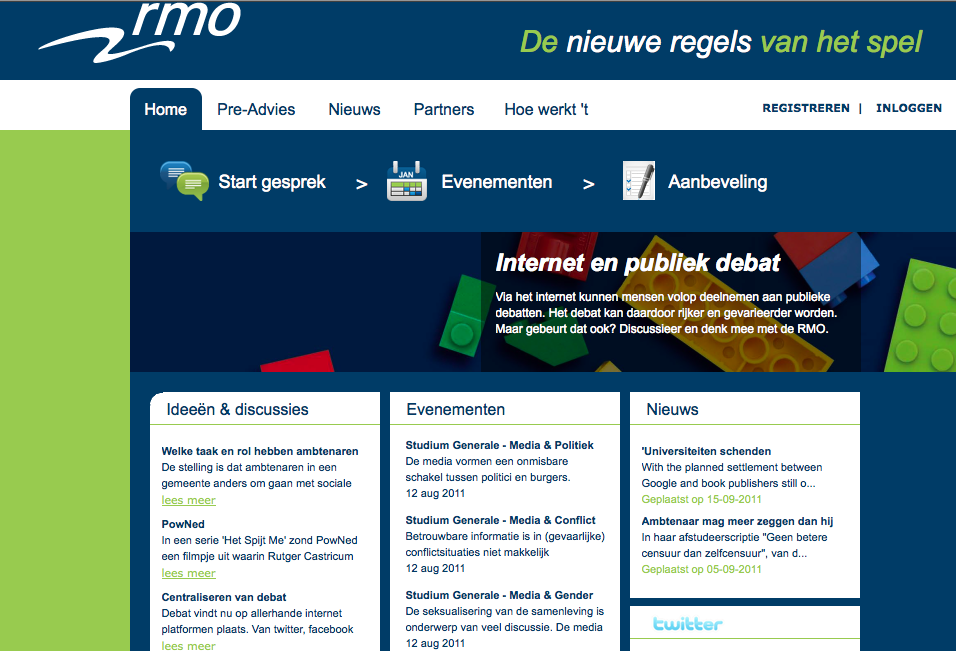 The questions in this pre-advice are based on 4 essays written by scientists from different disciplines on Internet and the public debate. Tamara Witschge is a communications experts and wrote about the inclusion and exclusion mechanisms online. She describes some social as well as technological mechanisms which we are faced with everyday. Sociologist Albert Benschop examined webfora with political content. He argues that despite the harsh language and slanging-matches, these fora can still be seen as a valuable source of information about democracy and social values. It’s an article that is easy to read and makes a strong point in a way that is easy to grasp. Gijs van Oenen examines how the focus on interactivity can be too evasive for people, causing them to turn away from technology and interactive platforms all together. For me the point that was made in this article wasn’t completely clear. The conclusion states no real answers to the questions proposed in the beginning, and it was a shame for me that the essay didn’t go deeper in the subject of how interactivity can be overwhelming. Mark Deuze‘s essay was a delight to read. It’s a good text that is well written and gives a clear perspective on media. Deuze argues that we don’t live with media anymore, but we live in media. It becomes more and more a decisive factor in our ways of communication and decision making. He argues that online media change our ways of thinking as individuals and the way we see and understand the world around us.

Conclusion
This report highlights some of the tensions and dilemmas in adjusting to the rapid developments in new media and gives a number of answers to the questions how our government should respond to changes in the public debate and information sphere. However, this report is only a pre-advice and is mostly focus on sketching out the current situation. To me as a media student, there is nothing new in this report. The report tries to cover a lot of topics in a very short texts. This means that all topics are only touched lightly and I missed an in-depth vision. The conclusions in the book, which tell us that active contributors are higher educated males, contradicts with the online platform that was launched to discuss the involvement of Internet and the public debate. And indeed, when we look at the conversations taking place in the discussion forum, we see mostly male contributors, and only a very few different names pop up.
In 2012 a concluding report will be launched and it will be interesting to see what conclusions are drawn from the discussions taking place online. You can follow the progress on http://www.denieuweregelsvanhetspel.nl