Book Review ‘Alone Together: Why We Expect More from Technology and Less from Each Other’ by Sherry Turkle (Part 1)

About Roos van Tongerloo
I am Roos, I like robots, loads of shiny gadgets I cannot afford, philosophy, my own cats, the smell of an old book and words. I hate numbers; namely math, statistics, databases and phone numbers. Actually all kinds of numbers. And, although in real life I might seem like a pretty decent person, please do not try to phone me; I get nervous on the phone and will most definitely make an ass out of myself. 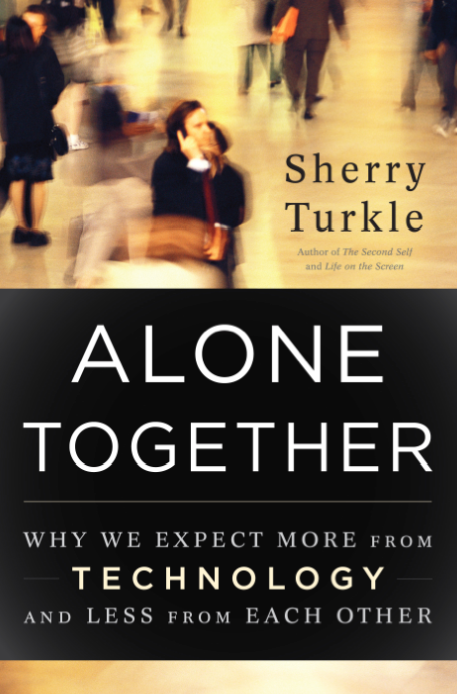 About 30 percent of the Dutch are unhappy about the social support they get from their fellow citizens. A third of those wish they would get more visitors, for the occasional small talk, and 28 percent wish they would get invited to party’s for dinner a bit more. More that a million Dutch people feel lonely; 50 percent of the lonely people say they don’t have anybody they can fully trust and one in 4 people are in desperate need of a true friend.

These quite depressing facts come from an article in last Saturdays Volkskrant. Apparently this week is called ‘National Week against Loneliness’, a week accompanied by the slogan ‘Avoid Loneliness, Strengthen your Social Convoy’.

I don’t mean to brag but, luckily, loneliness is something I have never been familiar with. I cannot recall a day in the last few years I was not on chatting, texting, calling, WhatsApp-ing, Skyping or sending an email. (Well, apart from some hours on a plane and days abroad, where I was most definitely desperately looking for a Wi-Fi connection.)

New Media have brought us phenomenal inventions which seem to make our (social) lives a lot easier. Online we can explore the world, buy anything we want, watch anything we want and interaction with friends and relatives is just a click away. Social media have made our social lives easy to manage. That is, if you are the proud owner of a social life. Indeed, there is not much you can do with all the apps and accounts to make your social life manageable, if there is no one interact with.

Apart from several successful dating sites, loneliness appears to be a first world problem that still can not be solved by one of New Media’s clever solutions. But of course, New Media do not include any quitters.

Sherry Turkle is Professor of the Social Studies of Science and Technology at MIT Initiative on Technology and Self, and a licensed clinical psychologist. Her most recent book ‘Alone Together: Why We Expect More from Technology and Less from Each Other’ deals with loneliness and New Media as interdependent factors. To use her words:

We begin to feel overwhelmed and depleted by the lives technology makes possible. We may be free to work from anywhere, but we are also prone to being lonely everywhere. (…) We turn to new technology to fill the void, but as technology ramps up, our emotional lives ramp down. – Turkle, 2011

The first part of the book is mainly about the so called ‘Robotic Moment’ and how this affects us people. These days, we are familiar with all sorts of robots; from Furbies and Tamagotchi’s to Anna from Ikea or a simple cash machine. Robots seem to live up to our expectations more and more, and our expectations ramp up with every new robotic invention. Making us, according to Turkle, vulnerable. A vulnerability, she states, ‘I believe not without risk’.

Her research is based on interviews with all kinds of people; children, elderly and college boys and girls. She often lents them a robot for some time to find out the kind of relationship people develop with the inanimate thing. Results differ:

In one of her chapters, Turkle talks to a college boy who is the proud owner of an AIBO robot. He says talking to an AIBO ‘makes you better, like, if you’re bored or tired or let down… because you’re actually, like, interacting with something. It’s nice to get thoughts out.’

But getting thoughts out is not enough for a true companion, it seems. Roxxxy, the first ‘real sex robot’ cannot move by herself, but she is able to respond to touch and have  quite complex conversation with the ‘user’. Some argue that having a robot as a girlfriend is a sad thing. Others, as Turkle describes, state that having a robot companion is at least better than being lonely. Here, it seems as if robots can indeed help us defeat loneliness a little.

Nevertheless, Turkle warns us for the dark side of believing in a robot as a true companion. Interaction with a robot is not the same as interaction with another human being. Even though scientists can create a robot, able to appear true human, it will still lack the ability to see the world through the eyes of the other. This ability is called ‘alterity’ and it is something that almost certainly can never be thought to a non-human creation.

The fact that some of us might prefer companionship with a inanimate, could harm our over all perception of interaction. Life with ‘real people’ may become overwhelming and incomprehensible. Because dependence on an other human being requires al lot of effort and comes with the risk of being hurt, makes the robot option the easy way to go. Ironically, this may lead to us being even more lonely, by avoiding any human to human interaction. As Sherry concludes:

We come full circle. Robots, which enchant us into increasingly intense relationships with the inanimate, are here proposed as a cure for our too intense immersion in digital connectivity. Robots, the Japanese hope, will pull us back toward the physical real an thus each other.

I would very much recommend the first part of Turkle’s book, since the second part of the book – which deals with social media and the digital self – seems a bit barred to me and the topic much overanalyzed. The first part however, shows hows the results of a thorough and personal investigation. Her research is done in a way that is, in my opinion, innovative and is not much about the what has been written before, but about up, close and personal encounters with the inanimate. These kind of ‘real’ exemples strengthen her believes and makes every point she makes mightily convincing.

Note: This thursday, Shelly Turkle gives a Masterclass at the Nexus Instituut in Tilburg. If you would like to attend, subscribe and get the book for free!

Tags: alone together, loneliness, robots
One Response to “Book Review ‘Alone Together: Why We Expect More from Technology and Less from Each Other’ by Sherry Turkle (Part 1)”
Leave a Reply
This blog is protected by Dave's Spam Karma 2: 2705362 Spams eaten and counting...