A development towards the wireless is in full effect. Take for instance video game consoles like the Nintendo Wii or PlayStation 3, which make use of wireless controllers. Add the Wi-Fi for internet connectivity and the gamer is set to go and lose his or herself in an immersive experience. Or take a look at your smartphone for example, that’s able to wirelessly receive all sorts of data like OTA (over-the-air) firmware updates. Adrian Mackenzie wrote about the notion of wirelessness in his book Wirelessness: Radical empiricism in network cultures. 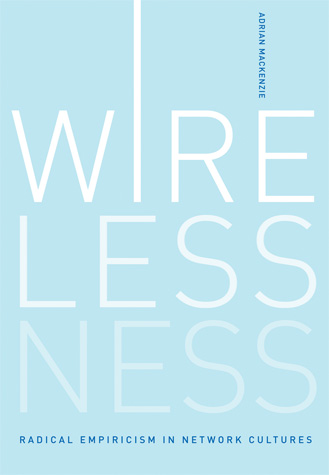 In his book Adrian Mackenzie refers to the work of American philosopher William James and his doctrine on radical empiricism and pragmatism. Let’s first give an overview of the key points of radical empiricism. William James stated that the object-subject-relation, the distinction of mind and matter and the notion of truth needed to be radically reconsidered. In his eyes the object-subject-relation is fundamentally flawed. For James, there was no clear distinction between being and the material objects that surround us. He notes that consciousness is a thing and he continues that it’s composed of one primal “stuff” which he calls pure experience. Experience in this sense is the immediate flux of life which furnishes the material to our later reflection with its conceptual categories. (Russell, 1945) Moreover, experience is seen in relation to the matter surrounding us. This notion of experience is key to radical empiricism and inspired Mackenzie in his view on wirelessness.

From radical empiricism to wirelessness

Adrian re-uses James’s doctrine to give a complicated yet interesting take on how to perceive the wireless world that we live in today. As mentioned earlier, experience can be seen as a flux of life. It is this idea of transition and movement which Mackenzie emphasizes on a multitude of levels for the notion of wirelessness. He for instance takes a dive into the concept of the wireless city and explains how the idea of a wireless city, often attempted to control and organize wirelessness, is affected by all sorts of subtitutions in its practices. Mackenzie concludes that wirelessness terminates in a movement rather than a place. (Mackenzie, 2010) Mackenzie then follows on the concept of signals and stresses the relation between code and chips. Differentiation amongst signals and their converging paths has become an important aspect. How can we then view this in relation to radical empiricism? Mackenzie clarifies:

If we do not appreciate the of work of algorithmic processes, then we cannot understand the effervescences associated with wirelessness – how chips multiply and flow in their billions into markets, how new forms of embodied habit and conduct appear, how places are transformed into zones of connectivity, and how new species of sociality concresce around them. We also can’t understand the growth of wirelessness, its proliferation, its overlaps and contestation, or its structuring of collective experience. Wirelessness as a state of effervescence develops in assemblages of conjunctive relations: it lies at the fringes of experience, but tinges experience with certain feelings of proximitiy and attentiveness that may very well not register consciously. (Mackenzie, 2010: 69)

In later chapters the author deals with wirelessness on several levels, which include wireless devices, wirelessness as a product and how we act wirelessly, for example in relation to mapping concepts like the API of Google Maps. Mackenzie tries to tackle the difficulties of understanding wirelessness and uses radical empiricism as a way to home in on the notion of (wireless) experience. Personally I found it a very though read, because I was new to the philosophy of radical empiricism and the author does not really give a structed overview to clarify this first. Furthermore, I had some troubles with the rather closed system of terms in which the book was written. By that I mean that Mackenzie continuously falls back on that same radical empiricism and even literally repeats himself doing so. Nevertheless, he concludes his story by stating that the flow of experience has to be reconfigured. With Wirelessness Adrian Mackenzie makes clear that we need to form a greater awareness and a better understanding of what it actually entails to be and act wireless in this world.

Wireless experience in the future?