Right man for the job: how LinkedIn is changing the way employees are recruited.

In today’s highly competitive market companies are increasingly turning to look at how to best attract one of their most valuable resources: people (Wilson and Sayers, 1997). Facing the troubles concerned with the phenomenon of ‘jobhopping’, the tendency of young professionals to switch jobs at a higher rate than previous generations (Leader-Chivée & Cowan, 2008), companies feel the need to actively reach out to suitable (to-be) employees. Furthermore, as the communities in which companies do business are becoming more diverse, recruiting departments are looking to attract a more heterogenous workforce and stating this objective clearly in their organization’s mission (Miller and Katz, 2002). In search of this diversity recruitment departments are starting to realize the potential social networks offer in acquiring the right man or woman for the job. With over 1 billion people online today (Netpop, 2009), the internet – and in particular the rise of social networks like LinkedIn, Facebook and Twitter – have created opportunities for job seekers on the other hand to actively market themselves to recruiters and HR-personal (Roberts & Roach, 2009). A stunning 82% of American job seekers use social networks to find their new employer. Recruiters have embraced this new way of finding their staff: over 80% of companies in the United States will use social networks to recruit their staff in 2011 (Jobvite, 2011).

According to the Jobvite survey (2011) of the social networks used for searching and contacting possible staff members LinkedIn is used the most, followed by Facebook and Twitter. Founded in 2003, with over 120 million users in over 200 countries (LinkedIn, 2011), LinkedIn is currently the third biggest social network site worldwide (Alexa, 2011). LinkedIn is used by business professionals as a platform to maintain and expand their professional network, research (potential) clients, promote their companies and themselves and look for job opportunities. From the perspective of the job seekers LinkedIn proves useful because it enables them to seek out new job opportunities without appearing to be “shopping themselves around”. In comparison to online job boards like for example Mosterboard.com where job hunters are showcased as people eagerly waiting to land a job, LinkedIn provides a network in which the job seeker can weigh the opportunities without having to seem eagerly in need of a new job. From the perspective of the recruiter LinkedIn also has a clear advantage: the possibility to recruit the so-called ‘passive talents’. Passive talents is a term that is used to describe the most talented and thus sought-after people in a certain area of profession that are currently employed and not actively seeking for a new job (this doesn’t mean however that they won’t change jobs when they feel this new job is an improvement). Because these passive talents are connected to the network, recruiter can use LinkedIn to search and reach out to these people to offer them a (better) job opportunity.

As these millions of professionals have joined the network, the potential that LinkedIn (or any other social network) offers recruiters to search this vast and diverse pool of people at low costs has increased dramatically. One of the most widely used methods of using LinkedIn to search for potential employees is ‘trolling’: searching candidates that are suitable for an open position and reach out to them before posting the job online for anyone to react on (Grensing-Pophal, 2009). Another way in which LinkedIn could be used to engage job seekers is to post a link on the career website of a company that takes the visitor to the company’s LinkedIn-page. On this company’s LinkedIn-page job seekers are then able to find out if (a friend of) someone in their network already works for the company. In doing so job seekers are stimulated to connect with these people and establish a more personal way of finding out if the job offer might be suitable for them as well as get referrals from their connection to the company in question (Grensing-Pophal, 2009). Lastly, LinkedIn offers the possibility to research a candidate before interviewing him or her by checking referrals and former occupations. According to the Jobvite survey (2011) referrals are considered to be the most valuable source for asserting candidate quality.

Since the adoption of social networks and in particular LinkedIn by recruiters and HR-personal happened relatively recently I think it is interesting to see how this adoption changed the practice of recruiting. In my search on academic research on the topic of LinkedIn and more precise its effect on the recruiting practice I was surprised by the little amount of research I found. As stated above both Grensing-Pophal (2009) and Robert and Roach (2009) have looked at the effect of social networks on recruiting. Besides these two articles I found a couple of other articles on the subject by using Google Scholar and the universities academic databases (among others; Skeels and Grudin, 2009; Papacharissi, 2009). These articles have mainly focused on how users use LinkedIn to maintain their professional network, promoting themselves and find a job, leaving the question of how the rise of LinkedIn affected the recruiting practice for the HR-personal and recruiters, the ‘hirers’, mostly unanswered. 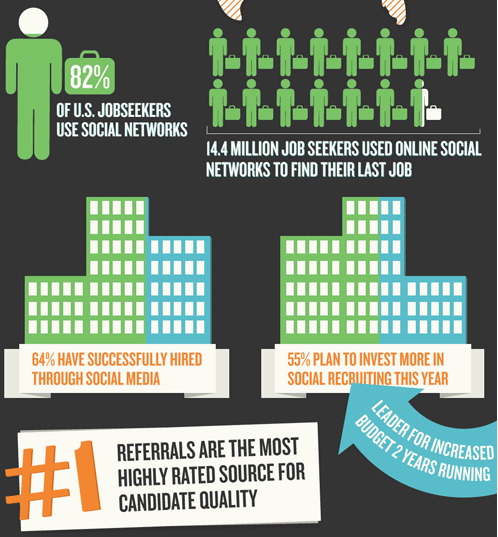 Because recruiting is ambiguous in the sense that many factors influence any hiring decision I propose to examine the effect of LinkedIn on this hiring-process by doing qualitative research by conducting semi-structured interviews with HR-personal of large organizations. I feel that by using a qualitative method of research a more in depth understanding can be established about the effect of LinkedIn on the recruiting process. In these interviews I would like to look at questions like: How has LinkedIn influenced the practice of recruiting? Has LinkedIn help democratize the practice of recruiting by offering candidates equal changes? Has LinkedIn help make the recruiting process more cost-efficient? Does using LinkedIn for recruiting make the practice easier? Does using LinkedIn lead to better candidates? How is LinkedIn used to search potential candidates? What are the most important elements of a LinkedIn profile of a candidate in assessing if the candidate is suitable for the position? What is the role of connections a candidate has? etc.

This research would add to the existing literature by offering the new perspective of the side of the recruiter in the current body of work. Furthermore, the results of this research could provide a do’s and don’ts-list for job seekers by offering them a clear understanding of the way recruiters use LinkedIn in searching for new personal. For recruiters the results could be used as a guidebook for HR-personal that are using social networks in recruiting people.

Tags: linkedin, recruiting, recruitment, social network, Social networking site
4 Responses to “Right man for the job: how LinkedIn is changing the way employees are recruited.”
Leave a Reply
This blog is protected by Dave's Spam Karma 2: 2705362 Spams eaten and counting...