What can social networks do for radio?

Nowadays everything is only about sharing and posting music online. It is a fact that most of the traditional radio stations are outdating. Not to mention also the crisis is facing the music industry. Using social networks and other web 2.0 outlets is the best way to readapt this old medium.

Laid Back is an internet medium mixing radio and magazine coupled with a content production powerhouse and a communication agency ((http://www.laid-back.be/))

In my view, there is one radio station that did a really good job in this sense which is the Laid Back Radio. It was first founded in 2002 as a weekly radio show and broadcasted on a local radio station in Brussels. In 2005 the website http://ldbk.eu was launched and converted this radio station into a web radio and magazine. The articles deal with everything is urban such as music, street art or events. I think this webpage is really well designed and also redirects to different networks like Twitter, Facebook, SoundCloud, Bandcamp, MixCloud, Vimeo, Youtube, Dragontape, Foursquare, Flickr and Tumblr. Also they indicate we should forget about MySpace.

After exploring the FM airwaves, Julien Mourlon who is an engineer specialized in computer science and creator of the Laid Back Radio decided in December 2008 to release an online radio station in order to get a larger audience. It plays mainly Hip Hop, Soul, Funk, Jazz, Psych, Rock, Disco and Latin music.

Nowadays our priority is to connect existing communities around the world and activate them to engage in different projects. Most of our content is exclusive and generated through this unique and ever-growing international network of creative minds (designer, photographers, writers, artists, musicians, DJ’s, software developers, filmakers and so forth) ((http://www.laid-back.be/blog/?page_id=2))

Julien Mourlon held a conference in 2008 in collaboration with Cleverwood to speak about the future of the radio Vs the new media. Right after a desktop player was built. It’s a software using Adobe Air and allowing to integrate several services such as Radionomy for audio streaming, Last.fm for artist biography and playlist scrobbling, Flickr for pictures, Google for extra info and Twitter for messaging. Radionomy is one of these new online services that allow users to create their own radio station. 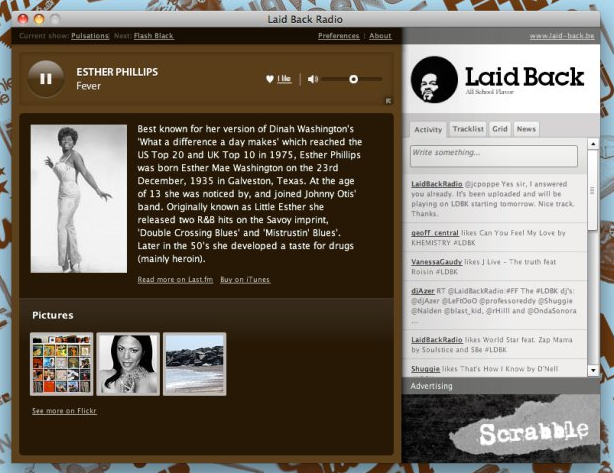 This desktop player enables listeners not only to communicate with each other but also to have information about the music they listen to. It is a totally interactive experience. You can download it in the Laid Back webpage. Also LDBK Radio is available in iTunes under Hip Hop/Rap.

One thing really important for us is to make no difference between a listener, a visitor and a collaborator or producer of content ((http://vimeo.com/channels/laidback#10401372))

The Radio Manifesto or 11 recommendations to update the radio was therefore written.  Through this document we can see more clearly everything that can be done in order to bring life to the next stage of the radio: “The next (re)volution is radio”.

It is time for radio stations to adapt to the new media technologies and to the ever-evolving listeners behavior ((http://www.laid-back.be/blog/?p=1320)) 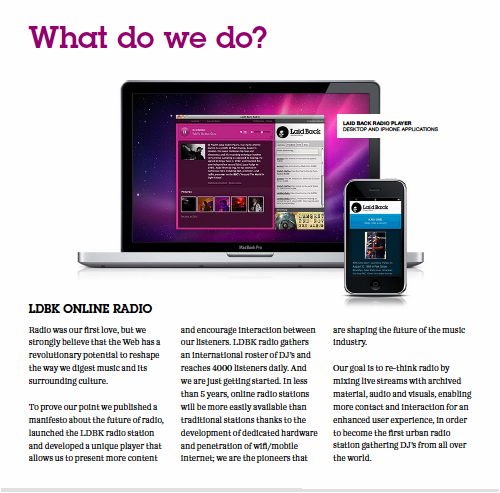 The LDBK project’s creators understood the need to convert the radio into Radio 2.0. Besides the radio player they also created podcasts and iPhone applications. Even though the Web 2.0 almost killed the traditional radio it also offered great possibilities to update this old medium. For the first time in the history, the radio doesn’t have to be limited to a geographical area thanks to Internet. The only problem is that very few FM stations has already started this revolution.

2 Responses to “What can social networks do for radio?”
Leave a Reply
This blog is protected by Dave's Spam Karma 2: 2705362 Spams eaten and counting...