Are you tired of all those fines in your mailbox because your speed was too high? Are you again surprised by another sneaky hidden speed camera? Those times could belong to the past since the app Flitsers.mobi released in August this year.

Since January 2004, it is forbidden using a radar detector on any motor vehicle in The Netherlands. Radar detectors allowed the driver to detect if their speed is being monitored by the police. Before the police could measure your driving speed properly, the device gives a clear signal so you can lower your speed before getting fined. After the radar is out of range, you can speed up again and continue as fast as you desire. The ban on radar detectors ended this era. The police uses radar detector detectors to detect if you are detecting radars. If so, your penalty would probably be much higher than driving only that few kilometers per hour too fast.

Quickly after the ban on radar detectors, navigation systems like TomTom became popular. Based on your GPS location, several navigation systems were able to warn for speed cameras. Unfortunately, those databases are not always up to date. The new app Flitsers.mobi (part of the mobile website flitsers.mobi) allows you to register a new speed detector yourself. Let’s go for a drive! 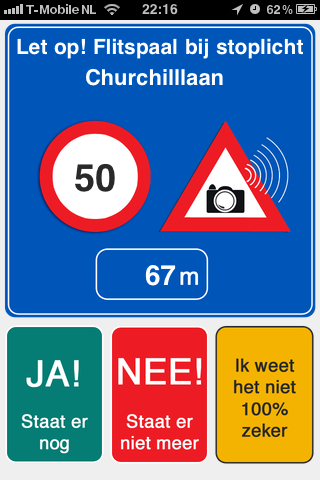 When I started the app, a few radars appeared. The one closest to mine was about 30 kilometers away, but this was probably due to the fact that is was already 11pm. Most of the temporary speed monitorings take place when there is a bit more traffic on the roads. Turning on the GPS in the map-view gave me a nice overview of all speed cams on the highways, as well as all known (fixed) ones in my neighborhood. It is only about 250 meters from my dorm to meet the first speed cam. As soon as I hit the road, the app warned me and asked to confirm if the cam is still there. Because it is a fixed one, I pressed ‘Yes’ and got the opportunity to share something on Twitter, Facebook or by e-mail.

During my trip through Leiden, Voorschoten and Oegstgeest I tried to find speed cams which are not in the app yet. I set the app to warn me when a cam is within a range of 250 meters. While I approached an intersection in Voorschoten I really thought I got a missing one, but about 20 meters before I still received the warning message. Since my GPS location was quite accurate and the Flitsers.mobi map view displayed the cam on its right position, the delay might has something to do with the internet connection, which could be much better on that site. 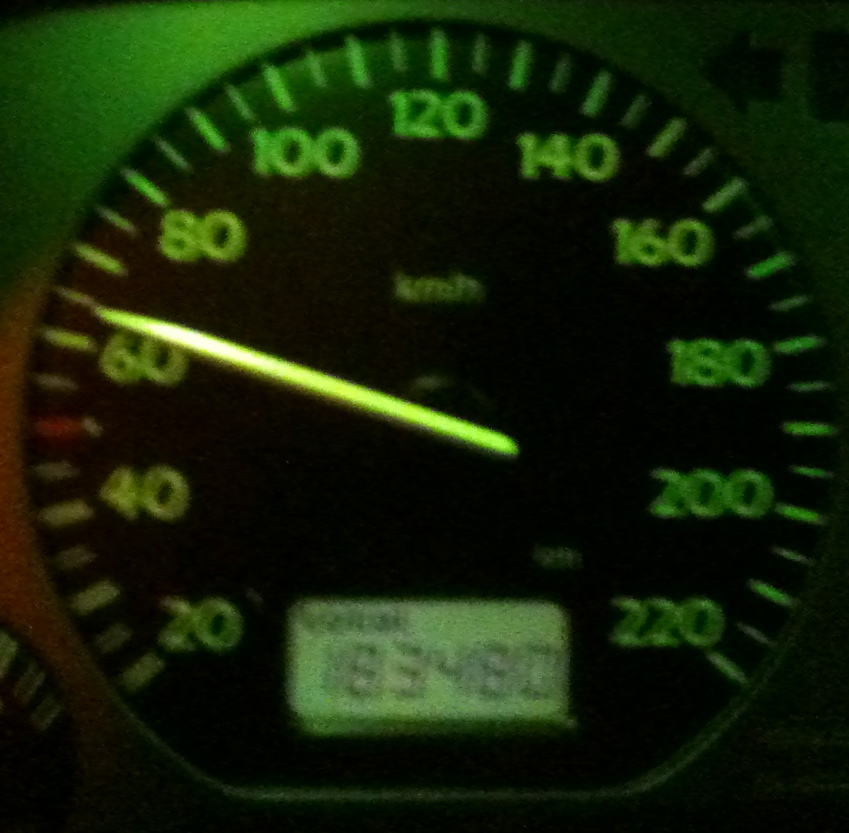 I hoped to add a new speed camera to the Flitsers database so I was able to try the app’s social function. I have not seen a police monitoring on my route, so I tried a place where a new fixed cam was installed about a year ago. While driving and taking some pictures of my speedometer, my iPhone suddenly showed a push notification of the cam I was heading to. Unfortunately I did not need to add this camera! However, the app asked me whether it should leave the GPS on when I switched to the Camera app. GPS usage costs lots of battery power, so you don’t want to leave it on for nothing.

When driving on the highway, the app recognizes the road number and the corresponding hectometer signs. If you spot a new speed monitor, just press the ‘Add’ button and it automatically shows a list of the last positions you passed the last minutes. I gave up my hope to find a speed cam which was not in the list yet, so I decided to randomly add one on this road. In the first place I apologize to all the people receiving a fake speed cam warning. But secondly, it took my phone about five minutes to register due to the poor internet connection. When I finally got the ‘OK’ message, the cam was neither on the list nor it appeared later that evening. So either the social function works very well, or the app was tired of trying to connect to the server and did nothing at all. 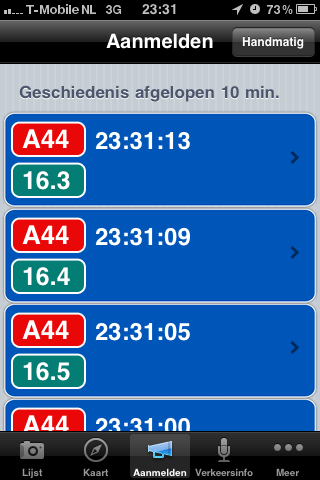 Bringing it all together, Flitsers.mobi is a very useful app for notorious speedy drivers. The developers really did a good job in thinking of a smartphone’s possibilities. Besides speed cams, you can also listen to the lastest traffic information, as well as viewing a list with recent traffic jams. On the other hand, if you are regularly acting like a Formula 1 driver, the app warns you probably too late at some points. Flitsers distinguishes itself from other speed cam detectors because it encourages users to contribute actively, as well as it recognizes the direction in which you drive so you will not be bothered by irrelevant speed cam warnings. Some improvements are very welcome, but it is absolutely the best speed cam detector you can get!