We’ll protect you from patent trolls and gay men in underwear!

In the most recent edition of the raging patent war between tech giant Apple, Google and Mirosoft, Apple has filed for a patent that would, if permitted, give them an edge over the app distribution systems of the competitors. A couple of days ago, Apple filed a patent for in-app purchases. This patent is the result of an ongoing conflict with patent troll company Lodsys, who own a patent which resembles a generic in-app purchase system. A company which sole purpose consists of suing other companies that use their patents. By harassing developers with the goal to extract licence fees earlier this year, they actually played into Apples hands. When the legal threats were enforced, the obviously confused developer community responded with an immediate boycott of in-app purchases. They urged Apple to step in and resolve this issue. While the threats struggled to materialize because of some legal complications, Apple, technically, never fully resolved this blatant attack on its developer community, until now. The new patent is an attempt to retake control of its own ecosystem. 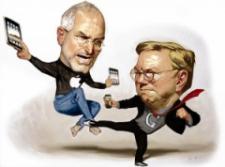 This particular case is interesting for two reasons. First, the heavily criticized attack by Lodsys was not directed at Apple itself. It seemed to go with the mantra, “if you can’t take out the big guy, go for the little ones”, whereas Apple as a corporate giants with virtually unlimited financial supplies and legal force seemed unreachable, they instead went for the vulnerable individual iOS developers. The notion that developers, working in a strictly controlled ecosystem, are still vulnerable to outside legal threats in using the API is worrying at the least. Secondly, the resulting pressure on Apple to defend its technological ecosystem led to the, far less generic, in-app purchase patent filed by Apple. This means that it will meet far less resistance and criticisms from the community than it maybe should. After all, Apple is just looking after its developers. The effective camouflage of a defensive move, legitimizes in a way the urge for a more powerful system of control for Apple, denying developers in using their own payment systems (thank you, Lodsys!). It’s a rare case of a battle in the ongoing patent wars where developers are directly involved and used as a pawn by the trolls and the big players.
This of course is just the tip of the ice berg of Apples mobile strategy, its controlled ecosystem. In 2008 (a year after the first iPhone came out), Jonathan Zittrain, a Harvard Law professor wrote a book, alarmingly, called: “The Future of the Internet – And How To Stop It“. His work is mainly a broad case for what he calls “generatively”, which is all about openness, “(…) it’s about products that provide platforms on which users can build new applications or run new protocols without permission” This he argues is at the heart of innovation. Regarding the iPhone he said in an interview, following the release of his book, he’s worried about what he calls “contingent generativity”, by which he means the way Apple still completely controls, even though the platform is open to third-party developers. Remember that Jobs envisioned the iPhone first as a closed garden, solely consisting of Apples own proprietary software, then he started realizing the value of the “hackers”,

(…) this shows that manufacturers see the value of having the nerds coding stuff. They see the value to them, they probably see the value to society. But they now have the ability to put a huge asterisk next to it, and I don’t think anybody has yet really thought through what that asterisk could mean.

At the time, Apple hadn’t released its terms on what base they review apps, so the “asterix” that Zittrain mentions wasn’t outspoken. Developers had to hope for the best when they submitted their (finished!) apps to the appstore. Still to this date, the review guidelines aren’t public. When visiting the referring page on Apples developer website, the document is closed off for non-developers. You have to register as a developer (which will cost you $99) to get to know what exactly you are able to develop in the first place. Which makes proper research into these matters unnecessarily difficult, also because these terms are frequently shifted around and updated. After an extensive search, I managed to get hold of a september 2010 version of the review guidelines.

This little paragraph got my attention, and sums up the whole document:

If it sounds like we’re control freaks, well, maybe it’s because we’re so committed to our users and making sure they have a quality experience with our products. Just like almost all of you are too.

We have lots of serious developers who don’t want their quality Apps to be surrounded by amateur hour.

Very flattering of course, but the point again is the protective nature of these claims. Operations of limiting autonomy of these applications are legitimized through a story of protection of the technical “quality experience”. The overall problem is that this “protecting” (against what? assumes a certain set of values or a morale. Something that doesn’t translate to a fixed set of review guidelines easily, but instead has more to do with a bourgeoise morale. The more technical natured protection that we see in the review guidelines and the recent patent case, crosses a line and enters a more cultural territory. Or as Steve Jobs remarkably put in an email to a customer

The moral and cultural protective nature is very obvious in the case of the rejection of Gay New York: 101 Can’t-Miss Places app, which was authored by Forbes and New York Times contributing journalist Anthony Grant. The app was an attempt at creating an authentic guide to “Gay New York”, which was rejected for the second (and final!) time back in April 2010. His thoughts about the rejection:

homophobic and discriminatory to the point of hostile

It was rejected on the grounds of that “in Apple’s reasonable judgement may be found objectionable, for example, materials that may considered obscene, pornographic, or defamatory”. This of course is not an easy task, considering the subject: The gay New York scene. But Anthony Grant went great lengths to keep his application “clean”. Apple also provided screenshots, so anyone can judge for themselves.

Obviously, these pictures are not pornographic or obscene. Of course there is nudity in the last picture, but I doubt that classical museum apps were rejected on the grounds that the male genetalia weren’t covered by a Vatican leaf. Either way you judge these pictures for yourselves, Apple has standed ground in rejecting this app. If you want to portray gay culture, iOS is not the platform for you.

There is an awful amount of control exhibited in Apples mobile ecosystem, and it has been  thoroughly discussed elsewhere. What’s interesting is the camouflage of a protective force, that Apple uses to enforce control over technological system and cultural content. It either protects their developers in gaining more control over its API or it protects its customers by setting the morale, by which new content is judged against.